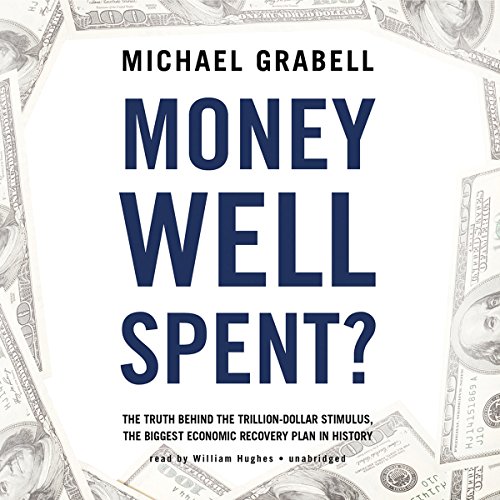 The Truth behind the Trillion-Dollar Stimulus, the Biggest Economic Recovery Plan in History
By: Michael Grabell
Narrated by: William Hughes
Length: 14 hrs and 18 mins
Categories: Non-fiction, Economics
3.5 out of 5 stars 3.5 (2 ratings)

The 2012 presidential campaign will, above all else, be a referendum on the Obama administration’s handling of the financial crisis, recalling the period when Obama’s “audacity of hope” met the austerity of reality. Central to this is the American Recovery and Reinvestment Act of 2009 - the largest economic recovery plan in American history. Senator Mitch McConnell gave a taste of the enormity of the money committed: if you had spent $1 million a day since Jesus was born, it still would not add up to the price tag of the stimulus package.

The story of how this almost entirely partisan piece of legislation - Democrats voted for it, Republicans against it - was passed and, more importantly, how the money was spent and to what effect, is known barely at all. Stepping outside the political fray, ProPublica’s Michael Grabell offers a perceptive, balanced, and dramatic story of what happened to the taxpayers’ money, pursuing the big question through behind-the-scenes interviews and on-the-ground reporting in more than a dozen states across the country.

MIchael Grabell has been a reporter at ProPublica since 2008, producing stories for USA Today, Salon, NPR, MSNBC, and the CBS Evening News. Before joining ProPublica, he was a reporter at the Dallas Morning News. He has twice been a finalist for the Livingston Award for Young Journalists. He lives in New Jersey.

“A deeply reported, well-written account of a difficult topic to capture, partly because of the complexity and partly because the stimulus package remains a work in progress.” ( Kirkus Reviews)

It Was Depressingly Honest, But Helpful

The problem with government is its often directionless form not an inherent incapacity to accomplish valuable goals. Reagan idea about government being the problem was his incapacity to be of any help to anyone but his wealthy benefactors. He saw the US as continuing the tradition of the Articles of loosy goosy Confederation not a United States of a Solid & Strong America. Reagan's vision & thinking was inside the box of states rights rather than outside the box of WeThePeople of the United States. It's the reason why Obama had to pepper every state with "something" rather than a cohesive & powerfully solid direction. We are not trapped in the partisan binge of nothing ever gets done well. High speed rail is the epitome of this problem.

Solyndra was a good play with bad follow through, it needed time to cover the gap. You saw that in its struggle against low gas prices & Chinese subsidization. That said, we should have also had 5 or 10 solyndras. And then higher fees on fossil fuels and subsidies for homeowners and businesses rather than backing one company. Then private industry would see the potential for sustained profits.

Conservatives often mix up private industry with societal needs. Yes private industry should be involved, but there are things such as flu drugs that no private industry sees enough profits in where the government must prop up to save its citizens. Relying purely on capitalism to cover all the gaps is fanciful at best, dangerous at worst. Think Climate Change.

I am so sick and tired of the Audible summary presenting a book that is not the least bit relevant to the actual topic at hand. This is my LAST attempt to stay with audible.com despite a long time loyal relationship.

What was most disappointing about Michael Grabell’s story?

This shouldn't even be categorized as non-fiction as it is nothing but a long, tedious, boring and slanted perspective on what idiots might call 'facts'.

Would you be willing to try another one of William Hughes’s performances?

If you could play editor, what scene or scenes would you have cut from Money Well Spent??

I would never let this book see the light of day. What a waste of time, money and effort. Tell this author to learn about something called research, facts, objective dialogue and truth.

Michael Grabell has written a well researched book on the stimulus. The writing is good, refreshingly entertaining in portions, as opposed to some other topical economic oriented books.

The book seems well balanced as to whether it was money well spent, some wasted/ most well intentioned/ some well spent.