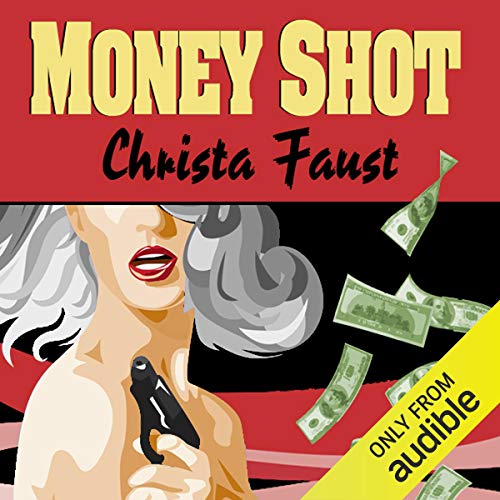 Quentin Tarantino called her "A Veronica amongst Betties". Now, for the first time in audio, here is Christa Faust's Money Shot, narrated by Susie Bright.

Christa Faust is the author of several novels, as well as the Snakes on a Plane screenplay. Christa has worked in the adult-film industry, both behind and in front of the cameras, for over a decade, starring in dozens of racy, fetish-oriented videos. She also wrote and directed a four-part bondage adventure serial called Dita in Distress, featuring world famous burlesque queen Dita Von Teese.

This is a good read. Funny, very noir, with a heroine who learns to use her considerable assets to kick butt, despite having her life trashed. My only complaint is the narration, which I think could have been better.

Also, Christa Faust's twitter feed is great to listen in to.

I downloaded this because I never read, or listen to anything else but action and adventure. This was without doubt the worst book I have ever read or listened to. I could have written it, it was so bad. Too much sex, violence . Would not have given it any starts but the site states I have to , just to give it my review

A teaser, not a spoiler

I did not expect to become so involved in this story. Though the context of this tale is the business of almost gratified sexual desire, this story is not sexual, nor is it a moral hammer up side the head. I keep finding myself thinking about Angel and the choices she made an I find myself comparing her to the "Man With No Name".

I will listen to this one again and again.

Thank you Christa Faust for a deliciously captivating tale.

Susie Bright's narration is fabulous. She really seems to be feeling the words she's speaking. Fun, tough yet vulnerable.

Unlike an earlier reviewer, I though Susie Bright was a great choice for this particular story. Would give this 4.5 starts if that was allowed.

Not the most compelling story in the world but the porn-industry slant is fun and the narrator reads in a sexy, sultry kind of way. Nice pulp/noir entertainment.

If you could sum up Money Shot in three words, what would they be?

What was one of the most memorable moments of Money Shot?

her realization of "who dun it".

Have you listened to any of Susie Bright’s other performances before? How does this one compare?

i have not won, but i would like to. she is known for reading erotica

yes, yes i did

this book is not for the feint of heart. i does have a mountain of foul language and shocking scenes but if you can take the gritty nature of the book, its a fast paced, gritty read that keeps you guessing. if you look up christa foust, her history is interesting and made me buy the book in the first place. i did not regret it, in fact, iv'd downloaded the rest of her books.

Didn't enjoy this book at all, in fact couldn't/didn't want to even finish it. I read over half but it just didn't captivate me enough until I reluctantly gave up. I'm perfectly comfortable with the genre and subject matter but, to me, it just seemed to lack a quality and ironically at times made me think of b grade porn movie scripts. It's won an award and many have said it's great, but sadly the audio version just didn't do it for me. It may have been the decision to use Susie Bright a voice I associate with Erotica was the error and had I read the print version and imagined my own voices, I may have perhaps felt completely different.