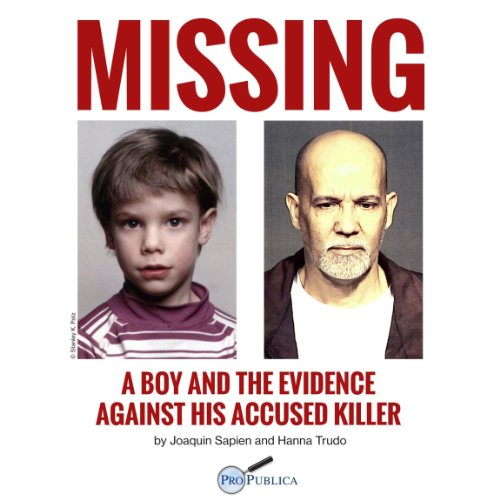 A Boy and the Evidence against His Accused Killer
By: Joaquin Sapien, Hanna Trudo, Joe Sexton
Narrated by: Stephen Bel Davies
Length: 1 hr and 6 mins
Categories: Non-fiction, True Crime
4 out of 5 stars 4.0 (1 rating)

Early on a May morning in 1979, six-year-old Etan Patz set off for school on his own for the first time. He vanished, and for three decades his case both frustrated and exhausted police, the FBI and a public heartbroken by the tragedy. Then, suddenly, the police in 2012 announced that a former bodega clerk from the Manhattan neighborhood where Etan lived had confessed to killing the boy. Detectives were convinced they had the boy’s murderer, and prosecutors soon indicted the man, Pedro Hernandez.

And, then, the remarkable case once more faded away.

With a trial set to begin in Spring 2014, ProPublica takes an in-depth look at the case, exploring the phenomenon of false confessions, tracking down witnesses whose stories don’t match, and asking hard questions about why the police and prosecutors didn’t take care to do what a growing body of judges and lawyers have called for: Tape the seven hours of interrogation the Patz suspect underwent before confessing.

Pedro Hernandez may have killed Etan Patz. History is rich with unlikely criminals. Or he may be at risk of becoming the next man wrongly convicted of a crime he didn’t commit.

If you like true stories like I do then yes, I think my husband sometimes thinks I'm a little weird for listening to so many true stories.

What was one of the most memorable moments of Missing?

I have a hard time getting past memorable because this is a sick person who destroys a little boys life.

Which character – as performed by Stephen Bel Davies – was your favorite?

Do you think Missing needs a follow-up book? Why or why not?