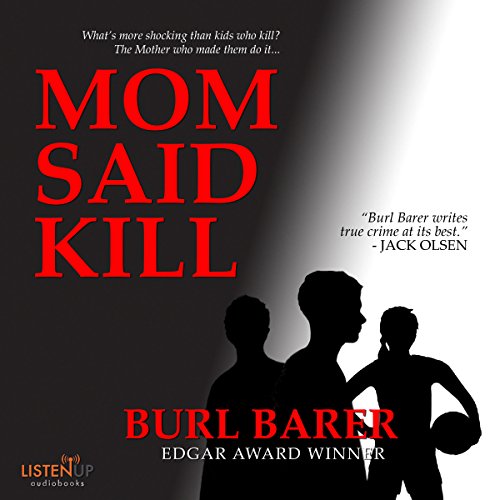 By: Burl Barer
Narrated by: Kevin Stillwell
Try for £0.00

A son's worst fears, a mother's worst crime, and a true story of teen killers.

When Jerry Heimann's son arrived at his father's home in Everett, Washington, he found his grandmother, an Alzheimer's patient, alone in the house, starving and dehydrated. His father was missing. The furniture was gone. Within hours, police realized that Jerry's live-in housekeeper, Barbara Opel, had robbed him and fled. But where was Jerry?

The next morning, Barbara Opel's 11-year-old son led police to Jerry's body. Soon, stunned detectives were getting confessions from a ragtag group of teens and preteens. At Barbara Opel's command, they had set upon Jerry Heimann with knives, fists, and baseball bats - and battered him to death. From 13-year-old Heather, who frantically stabbed Jerry after having sex with her boyfriend, to 7-year-old Tiffany, who helped clean up the blood, this is the horrifying story of how a mother turned her children and their friends into stone-cold killers and then rewarded them for their crime.

But but but .... That seems to be the theme of this book. The author has a profound true story of murder to tell, that he himself seems to be struggling to define and understand. He's frank about that, at least.

In the second part of the book, the author has several other agendas to push at length concerning social evils and a flawed justice system. Some of these topics wander well away from this crime, but may be of interest to people who are concerned with the same issues.

Another major concern I have about the book is the utter lack of background given for several of the juvenile participants. The focus is on the adult instigator and the kids most under her direct influence, probably because that is the most easily accessible information through court, police and media records. However, other key minor participants have very little, sometimes nothing, from the author about their families or prior history. The exception is one girl whose life background became material in later court proceedings. By excluding those life histories, the author fails to give any real context for the influence that Barbara and their friends were able to exert to persuade them to kill.

Except for the one individual, the lack of background is very apparent for the young killers' own friends who were approached by the kids themselves after the murder, and who agreed to help hide the body and cover up the crime. What would those kids' family and friends have to say about their life history, and who they were as people, that would have explained why they were so suggestable? Those interviews and research appear not to have been done, or at least not included in the book.

To me, this book, in the form that I listened to it (it may be expanded someday), was far short of being ready to publish. It hasn't been cleaned up to stay on topic. And it needs considerably more research on several of the key participants. It's an interesting story, but it is far from finished. I wonder if the author wrote solely from court, police and prison records, and from whatever published media accounts he could find, because there isn't much in the way of interviews with other family members, or broader background information.

All that said, the author's interest in these young killers is relevant as they are probably far more typical of much juvenile crime than we would like to believe. There are other juveniles caught in the justice system who got there after following Fagan-adults into serious crime, or even attempted trips overseas to join ISIS. And who are treated just as harshly in the courts, but whose backgrounds and victims are not getting this much attention. The how's and why's are a troubling reality to face.

I would have given this book 4 or 5 stars if it were not for the research shortfalls on some of the young participants, and the general failure to stay on point. Otherwise it is reasonably well-written. But the editing and the holes in the research are holding it back from being a truly excellent book about an important topic.

Repetitive and a yawner

First thing I had a problem with was the dates regarding Henry & Tiffany. So it says that Henry met her mother in June 1993 and later says they had one child from their union, Tiffany, born in May 1993. Since I don't have the printed version, I can't tell if it was written that way or read incorrectly. I listened to the same section 3 times to make sure I heard it correctly. Furthermore, it is very repetitive. I realize they are getting the stories from each of the young people involved, but getting the story over & over again with such repetition just makes it boring. I tried to like it & wanted to make it to the end, but just couldn't do it. Half way thru, I'm done with this book.

I found it difficult to get into this book. It was repetitive , slow, and far tooo much descriptive of matters that could have been omitted . some parts held my interest , however , overall I couldn’t wait for it to be over. Others may not find it as such, that was just my experience .