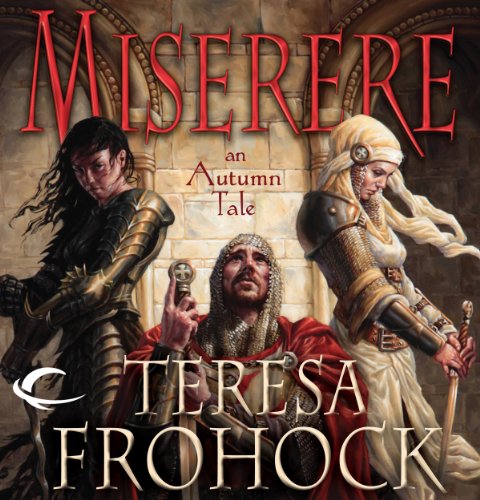 By: Teresa Frohock
Narrated by: Eileen Stevens
Try for £0.00

This installment of the Miserere series finds exorcist Lucian Negru shortly after she’s abandoned her lover in hell to save her sister Catarina’s soul. Catarina, however, not only resists being released from hell, but attempts to enlist Lucian’s help in opening up its gates to free the Fallen's hordes into the parallel dimension of Woerld, the buffer zone between Earth and Hell. Lucian refuses to help and is imprisoned in this fiery underworld, where she must hatch a plan to save herself and the world.

Stevens’ performance, which ranges from whispery to forceful, brings out the many emotional nuances of Lucian’s fantastic journey.

Exiled exorcist Lucian Negru deserted his lover in Hell in exchange for saving his sister Catarina's soul, but Catarina doesn't want salvation. She wants Lucian to help her fulfill her dark covenant with the Fallen Angels by using his power to open the Hell Gates. Catarina intends to lead the Fallen's hordes out of Hell and into the parallel dimension of Woerld, Heaven's frontline of defense between Earth and Hell. When Lucian refuses to help his sister, she imprisons and cripples him, but Lucian learns that Rachael, the lover he betrayed and abandoned in Hell, is dying from a demonic possession. Determined to rescue Rachael from the demon he unleashed on her soul, Lucian flees his sister, but Catarina's wrath isn't so easy to escape!

What listeners say about Miserere

Would you listen to Miserere again? Why?

I would ,The concept of woerld is great and is a different spin on the Good Vs Bad theme.

Rachel, she is strong and despite all the hardships she is resolved to do the right thing

Which character – as performed by Eileen Stevens – was your favourite?

Catarina she reminds me of old school villains and Eileen seems to have a lot of fun narrating her character.

I don't see anything about sequels in the author's website but I would love to know more about the universe .Hope Teresa writes more books in the future

Miserere is another name for Psalm 51 or literally it means "have pity or mercy" and when you hear Miserere, you will see that this is a Perfect Title for this book. I would not have noticed this debut novel from Theresa Frohock, but saw that it was recommended by both Ilona Andrews and Martha Wells so I decided to check it out. This might be the darkest fantasy I have ever loved. With chillingly evocative language, Frohock creates a tale that is part horror, part fantasy, and completely engrossing. Frohock bases much of the plot/setting structure on Christian mythos, but also uses angel references from the Kaballah and pieces of other religions and that lends some weird and scary "authenticity" to the story. Yet, Miserere is unlikely to offend the religious sensibilities of most of the faithful and it most certainly is not a proselytizing vehicle. It is very difficult to describe this debut novel because it is so different from any fantasy I've read. It probably most reminded me of the horror novel, Between Two Fires (Christopher Buehlman), because of the adept use of Christian iconography and the frightening depictions of pure evil. The angels of Miserere are not the sweet Valentine cherubs - these are the Fallen in all their evil glory and the Seraphim (literally "burning ones") who fight in Woerld to hold back the minions of Hell from the Earth. As good as Frohock is at presenting evil in its purest, scariest form, her "good guys" are not so pure and most are terribly flawed and also quite engaging. Frohock starts the reader in the middle of the story and fills in the pieces as the narrative progresses. If you read the Publisher's Summary, you'll have a good feel for where you are as you start out and this tale pulls the listener in very quickly. Caveats: There is some graphic violence, a little graphic sexual content, and the tone is Very Dark until the ending so this is not a book to listen to if you are having a bad day. On the brighter side, this is a redemption tale and it has a very satisfying ending.

Eileen Stevens' narration is not bad, but not as good as I think this book deserved. Stevens is really skilled with character voices so all of the dialog is quite good. However, she uses sort of a "sotto voce" tone for the the narrative sections like she's telling you a secret or something that I don't care for and she mispronounces some common words (like banal and derisive) which always bothers me.

Miserere has an interesting plot, intriguing characters, wildly imaginative world building, and nice prose - I highly recommend Miserere for anyone who has a strong constitution and can handle this dark fantasy. This is the first in a planned series so I'm looking forward to what else will emerge from the twisted imagination of Theresa Frohock.

A thoughtful fantasy for the over 30 crowd.

Where does Miserere rank among all the audiobooks you’ve listened to so far?

The character development was very interesting in this book. Frankly many of the paranormal fantasy books really don't have much depth to their characters. There is a maturity to this story that I found appealing. I would rank this story fairly highly.

What other book might you compare Miserere to and why?

Strangely enough I would compare it to Lois Bujold's Paladin of Souls in that both stories concern middle aged people who feel lives are played out due to past mistakes and fate. I like redemption stories.

What does Eileen Stevens bring to the story that you wouldn’t experience if you just read the book?

I enjoyed her narration.

No, I enjoyed this book, its characters, its story line, its world development in its totality.

Although I'm not religious, I found the idea of Christian holy magic and demons interesting. The protagonist's notion that he was in some manner responsible for his sister's warped character - over protecting her and not allowing her to develop coping strategies for life's rough spots was interesting to me. It seemed to be a plausible explanation.

I would be interested in reading other books from this author.

I discovered this book in the shelf of a Fantasy Book Club I joined. I was drawn to the title because we use it in the church I grew up in. Miserere, this was a wonderful tale of mistakes, forgiveness and second chances.

I always thought that love could heal anything and fix everything. But the author brilliantly depicted a love that crippled and made one dependent on the giver of that love. A mistake I’ve seen some parents make.

Ms. Frohock developed the desperate character of Lucian who will endear himself to you the more you get to know him. Broken yet powerful. One woman’s obsession and another woman’s damnation. He sought to right a wrong and was given a second chance. From the beginning, the tone of the tale was haunting because of his misery and need to escape his prison. The narrator did a great job of depicting his anguish. I was rooting for his redemption throughout the book.

The author’s fantasy world, Woerld, was steeped in religion. The story was entrenched in Christian beliefs. The concept of possession and exorcism was a big part of the tale. Fallen angels seeking to conquer Woerld and then earth were its main antagonists. And yet, it didn’t feel preachy to me. It had a moral lesson but it was delivered as part of the story.

I would recommend this to readers who have an open mind about church dogmas being slightly twisted. If you liked Angelology or Dan Brown’s books, you would probably like this book. This is a story of hope for people who have made mistakes and those who are broken.

This is one of the best stories that I have read in a long time. Major kudos for not propagating the "corrupt church/religion" trope.

Not a bad week long listen

The plot was pretty black and white but it was enjoyable.
The performance was an absolute joy to listen to.
:)

This is a novel about a man’s attempt to reclaim the life he lost years ago, and those who are determined to stop him. Set in the current, a majority of the book takes place in the realm where Heaven and Hell wage battles for control of earth. The author, Teresa Frohock, is a major talent and the narrator, Eileen Stevens, is equally gifted.

“Miserere” was released on Audible in November 2013 and I am shocked by the small number of listeners who have left reviews. Easily one of the most engaging books I have listened to at Audible and was so taken by the book that I let other parts of my life slide. I am so much in trouble, but this book is worth it.

Gets better as it goes on

At the beginning some of the concepts and dialogue were so idiotic I was almost rooting for the bad guys. It got better at the end. Still...sheesh...not too well conceived and the author definitely needs to keep those appointments with the therapist.