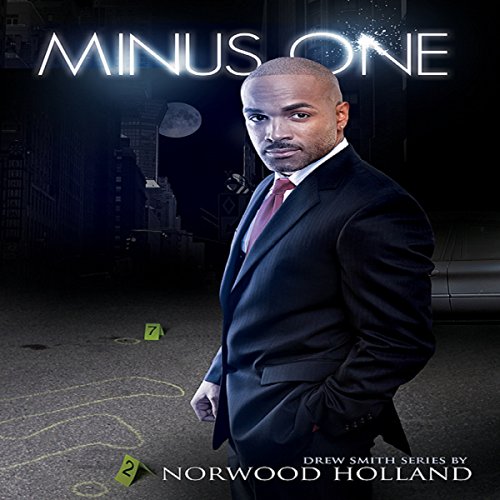 By: Norwood Holland
Narrated by: Zack Imbrogno
Try for £0.00

In this prequel to the Drew Smith Series, Norwood Holland takes us back to the beginning when Drew Smith launches his legal career. Before the ink is dry on his license, Smith finds himself at the center of a murder mystery. The recent law school graduate works as a hotel concierge and befriends two bellmen, Medhat and Julio. This eclectic trio form a solid fraternal friendship put to the test when Medhat is kidnapped after running up a drug tab he can't pay. Rescued by his crew, he then becomes the prime suspect in a string of murders. Driven by their romantic entanglements, the attorney is captivated with a pretty Latina whose father objects to her dating a black man. Julio and his Filipina love find themselves expecting, and Medhat's passion for blondes gets him snared in a femme fatale's net. Minus One captures Drew Smith's evolution from youthful indiscretion to a professional burdened with seriousness of purpose.

What listeners say about Minus One

Boring, boring, boring - 23 chapters to describe the characters and then a feeble attempt at making a story out of them - don't waste your money. The reader was abismal and could not even pronounce words such as 'naive', at times impossible to understand unless you were from the Deep South of America. The story bar should only have one star, I could not make the bar work, sorry.

This is a new author and narrator for me. “Minus One” is a prequel to the series that tells how Drew Smith started his law career. After graduating from law school, taking the bar examination and looking for a job in his new profession, Drew was working as a hotel concierge. Drew becomes friends with two bellmen, one an Egyptian and the other a Latino, Drew is black. Medhat ends up being a temporary roommate of Drew’s. Just as Drew is sworn into the bar, Medhat is arrested for murder. Drew has his first client. The story takes place in Washington D.C. and Drew is a graduate of Georgetown University School of Law.

The author is an attorney and started publishing stories as an independent author. The author is a good storyteller and he does an excellent job with description and character development. The suspense builds up throughout the book. The ending provided a surprise after a few unexpected twists in the plot. I am looking forward to reading more books by this author. Zack Imbragno does a good job narrating the story.