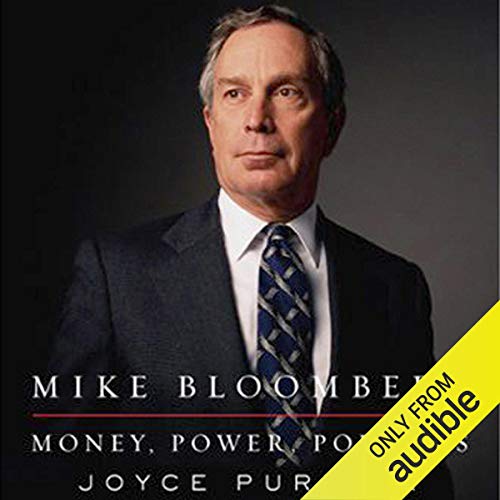 Michael Bloomberg is not only New York City's 108th mayor; he is a business genius and self-made billionaire. He has run the toughest city in America with an independence and show of ego that first brought him great success and eventually threatened it. Yet while Bloomberg is internationally known and admired, few people know the man behind the carefully crafted public persona.

In Mike Bloomberg, Joyce Purnick explores Mr. Bloomberg's life from his childhood in the suburbs of Boston, to his rise on Wall Street and the creation of Bloomberg L.P., to his mayoral record and controversial gamble on a third term. Drawing on her deep knowledge of New York City politics, and interviews with Bloombergs friends, family, colleagues, and the mayor himself, she creates a textured portrait of one of the more complex men of our era.

Not the most captivating, but a decent summary

I'm not sure this book does Bloomberg's life justice. Mike clearly led a fascinating life well before his run for mayor, yet this book tries to only touch on the headlines then oddly goes into detail on some of the less important parts. It's a good book as a high level summary of Bloomberg's accomplishments, but I'd prefer going more in depth to this, or just reading his Wikipedia page if you're only looking for headlines.

A great and relevant read

Coming at time when when Rumors surrounding a Bloomberg run for president, I found this book to be particularly interesting and informative about a man who has really accomplished so much. I find myself becoming more enthralled with this man as time progresses. Michael Bloomberg was mayor for the first my first five year as a New Yorker. I saw the city change so much for the better, yet I wanted to know more about his life. I definitely recommend this to someone interested in "Mike," New York City politics, or business in general.

Amazing biography of Mike Bloomberg. I was hoping to learn more about his business life, but this book is geared more towards his politics, although the former was also fairly discussed. Mark Moseley did a fantastic job! His constant change of tone and imitation of the characters' voices were on point. Makes you feel like he's actually telling a story than reading a book. Great job!

nice critical work done by the author: you get to know the many sides of M. Bloomberg. It would have been better if the business part of his life had an extra couple of chapters and the third term as mayor is missing.