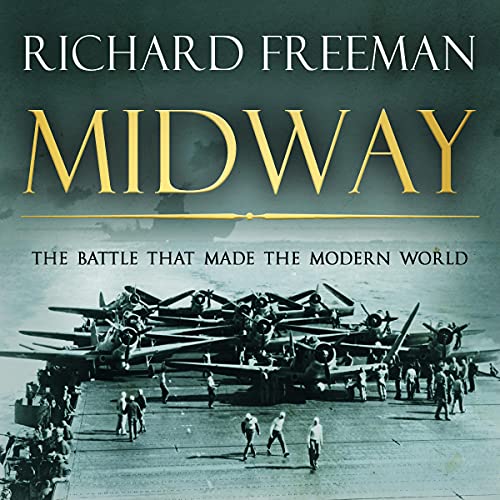 By: Richard Freeman
Narrated by: Will Huggins
Try for £0.00

It was the battle that made the modern world....

Midway was a naval battle like no other. It was fought thousands of miles from land, by dozens of planes over distances of hundreds of miles. It saw four massive Japanese aircraft carriers pitted against three similarly huge American carriers in a contest for domination of the Pacific.

The battle is the story of the young Japanese empire seeking to challenge the established industrial power of America. Japan had smashed America at Pearl Harbour, and shaken her at Coral Sea. Now she was ready to risk all in one mighty attempt to drive the United States Navy from the Pacific Ocean.

Japan’s admirals put to sea confident that they could take the Americans by surprise, take the Midway atoll and destroy the American carriers. American espionage ensured that Admiral Nimitz had full knowledge of the planned attack, so turning a Japanese trap into an American ambush.

The battle that followed raged over three days, full of set backs and disaster for each side. But Admirals Yamamoto and Nagumo had over-reached themselves and suffered the greatest naval defeat in history.

America entered Midway on the defensive, still a hesitant participant in the war. She left the battle as the world’s first super power.

Midway is a concise history of the battle that made the modern world.

This compelling short book from a best-selling author at the top of his field, brings the perfect mixture of storytelling and facts to provide a fascinating read. Great for fans of Joshua Levine and Laura Hillenbrand.

What listeners say about Midway