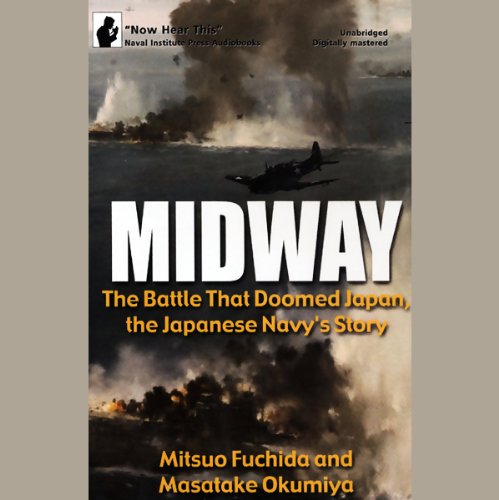 This landmark study was first published in English by the Naval Institute in 1955. Widely acknowledged for its valuable Japanese insights into the battle that turned the tide of war in the Pacific, the book has made a great impact on American readers over the years. Two Japanese naval aviators who participated in the operation provide an unsparing analysis of what caused Japan's staggering defeat.

Mitsuo Fuchida, who led the first air strike on Pearl Harbor, commanded the Akagi carrier air group and later made a study of the battle at the Japanese Naval War College. Masatake Okumiya, one of Japan's first dive-bomber pilots, was aboard the light carrier Ryujo and later served as a staff officer in a carrier division. Armed with knowledge of top-secret documents destroyed by the Japanese and access to private papers, they show the operation to be ill-conceived and poorly planned and executed, and fault their flag officers for lacking initiative, leadership, and clear thinking. With an introduction by an author known for his study of the battle from the American perspective, the work continues to make a significant contribution to World War II literature.

" Midway gives an enlightening account of the Japanese naval leaders of the time, placing a new perspective on their abilities, shortcomings, and their ways of thinking and acting" ( Military Review)
"Captain Fuchida's and Commander Okumiya's clear style should satisfy both the casual [listener] and the naval strategist." ( Baltimore Sun)

Edge of your seat history

This Japanese point of view of the battle of Midway is well written and edited. The reader is excellent in voice and tone. He brings out the excitement of the battle easily. The authors also give a nice history of Pearl Harbour and the reasons for the attack.

The low tech of WWII is interesting in light of today's smart bombs and cruise missles. The air war was waged with cross hair bomb sites and seat-of-your-pants luck. Used to watching the video of a smart bomb drop into the smokestack of the bad guys' bunker, I was greatly disturbed and irritated by the many misses of the pilots who dropped their bombs and torpedos ineffectively at Midway only to die in the attempt. What's clear though is that guiding your dive bomber through a shower of high caliber lead and keeping your concentration is unfathomable to anyone who has not been in combat.

The arrogance and hide-bound traditions of the Japanese were a part of their downfall at Midway, but there was an ample amount of bad luck, always an undervalued element of war. The battle could have gone the other way but for the outcome of seemly minor events.

It's apparent in this account of Midway that the loss of life was not simply the removal of so many pieces from the battle maps but the loss of human beings with friends, family, and loyal shipmates. The Japanese are human too, whatever your evaluation of their motives. These sailors went to war for a cause they thought was just, fighting a foe whose resolve was just as determined. In the end the book is about the stupidity and pathos of armed conflict. Midway was the turning point of the war in the Pacific. At Midway Japan was severely beaten and never recovered, yet slogged on for three more years all for the glory of an the god-emperor who, later during the American occupation of the home island, confessed to his people that he and his ancestors were not divine. In essence he was saying that, if you fought for the me, you fought for nothing.

It's not often that one finds a well-written book detailing the losing side's perspective of a battle.
The book is written well, with a fairly balanced perspective.

Mitsuo Fuchida and Masatake Okumiya provide a frank assessment of Japanese strategy from Pearl Harbor through Midway. The insider view from airmen who were on the bombed Japanese carriers is stunning.

The narrative brings out the authors' respect for the Japanese admirals in charge of the Midway effort. At the same time it is critical of their strategic errors and arrogance in the planning of the Midway campaign. It details the absence of radar, poor execution, bad search strategy and poor leadership decisions at critical points of the Midway battle.

If you are looking for a detailing of atrocities, or any reference to them, you won't find them in this book. You will, however, gain an appreciation for naval strategy and aircraft-carrier warfare. You'll walk away realizing the US was good, but more importantly, very lucky at Midway. A little fog, a little cloud cover, and a couple of poor decisions at the worst possible time by the Japanese Navy admirals swung the momentum in America's favor.

The book was a fantastic listen, and I couldn't stop listening once I'd started. I gave this 4 stars as the narration was a bit monotone. It's still a great listen, and I plan to listen to it again in the near future.

“Midway: The Battle That Doomed Japan, The Japanese Navy's Story” was a slightly more than typical historical account of a WWII battle, or any conflict for that matter. The research and fact finding was superior and the time line precise, however the story was dry, yet somewhat passionate. The authors had a unique perspective of the battle, having been aboard one of the doomed Japanese aircraft carriers. There were also a number of facts from the Japanese military about the planning, strategy, and execution of the battle plan that could have only been put in there proper perspective by a member of that military. However, after all is said and done there have been so many books written about this battle, some of them superior works, and Midway: The Battle That Doomed Japan, The Japanese Navy's Story” just wasn’t one of them. It just could not escape that uninteresting history for histories sake style of writing.

A Classic Whose Truth Has Now Been Challenged

I've been a Midway buff for most of my adult life. An incredibly dramatic story that Hollywood should definitely try again to tell after the awful star-filled bomb of 1976. I had read all the books on the American side, all of which relied heavily on Fuchida's book for the Japanese side.


But I had never read (heard) Fuchida's book until now. There is a lot to be learned from it. Japanese over-confidence that led them to cheating on their own war games of the battle. The crazy deployment by Admiral Yamamoto of Japan's enormous naval force. The eyewitness account of the battle itself.

I'm glad that I read it. But if you've been away from World War II naval history for a while, you should know that 2005's Shattered Sword is now the definitive book on the Midway battle. For the Japanese side it relies on testimony of survivors and the translation of many Japanese documents into English for the first time.

And it claims to bust many long-time myths about Midway. For example, that the sacrifice of Torpedo 8 was not in vain because it brought the Japanese fighters down to an altitude where they could not recover in time to intercept the dive bombers. (The dive bombers did not attack until a whole hour after the torpedo strike.) When the American dive bombers struck, the Japanese carrier decks were full of airplanes beginning to take off to attack the American carriers. (The decks were clear of planes at the time, although secondary explosions in the hanger decks doomed the carriers.)

Shattered Sword accuses Fuchida's book of many inaccuracies, calling some of them intentional. The "two-phase" search plan that Fuchida criticizes his commanders for not employing, according to the authors of the new book, was not part of Japanese or American doctrine in 1942.

So listen to Fuchida's book and read Shattered Sword and decide for yourself.

Fantastic book. If you like ww2 stuff! dload this. takes about half an hour to warm to it then it gets you and you are hooked till the end.

Not often do you get a book of this quality written by participants on the losing side of a battle. I found the book very fascinating and offering interesting insights on the battle.

I am glad I took the time to listen to this book from the Japanese perspective on Midway. I learned some interesting information.

I would have liked to hear more personal details and impressions from Mr. Fuchida in regards to his experiences. The criticisms of leaders and the Japanese people as a whole perhaps played well in the climate of the fifties, however analysis would be better.

Overall I enjoyed the book.

One of the few views from someone directly involve

The author was deeply involved in Japanese Naval Aviation in WW 2. He describes not only the Battle of Midway, but also the strategy, and even more interesting the reasons for the strategy, in their Naval doctrine and tactics.

He also tells, and shows through the examples in this case, the saying that I have seen in many places, that war is a catalog of blunders (Winston Churchill.)

Would you listen to Midway again? Why?

I have not read historial/military reports of these vital WW II battles from the Japanese perspective. This was reasonable and without too much defensiveness. I really enjoyed seeing the 'other side' and would like to read/hear more stories of battles especially written by high ranking officers of the 'other side'.

Much better thsn a second audiblr book on Midway.

Much better than the other audible book on Midway. This one reflects the Japaneses description of thd conflict. Put you biases aside and listen to this version on Midway WWII.