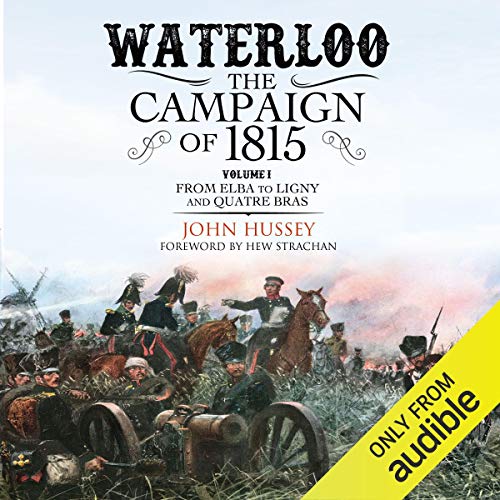 Waterloo: The Campaign of 1815

The first of two ground-breaking volumes on the Waterloo campaign, this audiobook is based upon a detailed analysis of sources old and new in four languages. It highlights the political stresses between the Allies, the problems of feeding and paying for the Allied forces assembling in Belgium during the undeclared war and how a strategy was thrashed out.

It studies the neglected topic of how the Allies beyond the Rhine hampered the plans of Blücher and Wellington, thus allowing Napoleon to snatch the initiative from them. Napoleon's operational plan is likewise analysed and the way in which Soult misinterpreted it and accounts from both sides help provide a vivid impression of the fighting on the first day, 15 June. This volume ends with the joint battles of Ligny and Quatre Bras the next day.

What listeners say about Waterloo: The Campaign of 1815

Well presented and researched however the author can't see past the Wellington's greatness so much so I was left wondering why the period was not called the Wellingtonian Wars. Blucher and especially Gneisenau get short shift and it is a wonder how two such incompetents could even be allowed to pour the schnapps at a general staff meeting. A large part of this book is devoted to justifying Wellington's inaction and failure to plan so much so you get the impression that Wellingtons failure to support Blucher was a stroke of genius.

A magisterial account of the campaign as a whole up to the twin battles of Quatre Bras and Ligny. It is particularly strong in capturing the challenges and tensions of coalition warfare, still relevant today. I am very much looking forward to the release of Volume 2: From Waterloo to the Restoration of Peace in Europe.

An excellent account of the hours, days, weeks and months leading up to and including 16th June 1815

If you are already well versed with the events of 18th June 1815 and you are looking for more details and explanation of the events prior to that day, then this is a book for you. From Napoleons arrival in the south of France to the evening of 16th June, the level of detail, particularly regarding orders to each army, is exceptional. There are also general explanations of the overall background to 1815, a good summary of the state of all forces involved, details and backgrounds of the generals involved (although not biographical details) and excellent topographical reports regarding the geography of the places involved.
Overall this is an excellent, detailed account of that period in history and would be a fascinating read for those already familiar with the subject matter.

The Hundred Days Campaign has always been a significant area of interest for me.

Hussey's book covers the prelude to the campaign in great detail, and an excellent overview of the logistics required by both sides.

If you're going to get one Napoleonic audiobook from Audible, get this one!

I cannot wait for the next installment to be released.

Come on Audible! Hurry up!!!

Brilliant research and detail, great narration, a book that goes into great depth about the political and military rivalry between the allies.

Excellent: Where is Volume 2

We need Volume 2, you know the volume that actually tells us about the battle of Waterloo. Why the delay, Audible?

This must be the definitive work for the 100 Days Campaign. The book is highly detailed whilst still retaining a good flow that keeps it from becoming too dry.

Excellent performance from the narrator.

I can't wait for vol 2!!!! Extremely fascinating detail about the strategic side of the Waterloo campaign. The author dispels numerous myths passed down as fact.

Belongs Amongst The Greats

"Waterloo: From Elba to Lingy and Quantre Bras Volume I" is another "An Army At Dawn," the first book in Rick Atkinson's WWII Liberation Trilogy. It's also comparable to Shelby Foote's glorious Civil War trilogy, Ian W. Toll's Pacific War Trilogy, and the newest entry off the top of my head, Richard B Frank's "Tower of Skulls: A History of Asia Pacific War Volume 1," which is surely to be one of the best multi-volume works in historical narrative history. There's every chance I"m missing another multi volume work. But these stand out. Regardless,"Waterloo" is in incredible company. So the anticipation for Volume two is very high to say the least.

Hussey goes into such incredible detail and is able to draw it all together into an incredibly clear flowing format. There are so many elements to this story. This is perhaps the military campaign I know the least about too. So it might take another couple of listens to fully grasp it all. So pay close attention not to mention anything. Also take advantage of the PDF maps in the library section. They came in very handy. Ric Jerron's narration is perfection. It completes the first volume. So needless to say I'm anticipating Volume II.

To the author, outstanding book, excellent research, well written. However, please try harder to suppress your British and specially Wellington bias. It really comes to the surface several times throughout the book and is quite annoying. Wellington was not the pure military genius you constantly portrayed him as.

This is a pretty heavy academic analysis however he grabbed my interest, kept my attention and I learnt a great deal. I would recommend this two people with patience