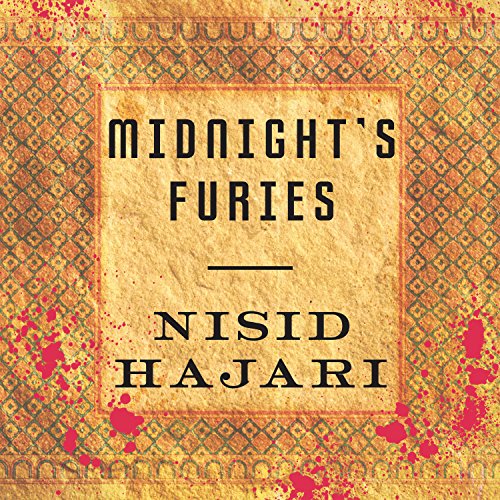 By: Nisid Hajari
Narrated by: Sunil Malhotra
Try for £0.00

Nobody expected the liberation of India and birth of Pakistan to be so bloody - it was supposed to be an answer to the dreams of Muslims and Hindus who had been ruled by the British for centuries. Jawaharlal Nehru, Gandhi's protégé and the political leader of India, believed that Indians were an inherently nonviolent, peaceful people. Pakistan's founder, Mohammad Ali Jinnah, was a secular lawyer, not a firebrand. But in August 1946, exactly a year before Independence, Calcutta erupted in street-gang fighting. A cycle of riots - targeting Hindus, then Muslims, then Sikhs - spiraled out of control. As the summer of 1947 approached, all three groups were heavily armed and on edge, and the British rushed to leave. Hell let loose. Trains carried Muslims west and Hindus east to their slaughter. Some of the most brutal and widespread ethnic cleansing in modern history erupted on both sides of the new border, searing a divide between India and Pakistan that remains a root cause of many evils. From jihadi terrorism to nuclear proliferation, the searing tale told in Midnight's Furies explains all too many of the headlines we read today.

What listeners say about Midnight's Furies

As unbiased as it gets

Would you listen to Midnight's Furies again? Why?

Yes, I would. It serves as a well documented reference; rather a timeline.

What other book might you compare Midnight's Furies to, and why?

A novel- Midnight's children. Also about the birth of twin nations.

Although the spiral of events was known, I did enjoy the moment of freedom.

Yes and no. I kept grasping for even more insight than it offers- which is quite a bit- for personal reasons, I wanted the book to never end. It served as a window to what became of my people.

Don't miss the most unbiased view I've heard so far. And change from the lessons you learn.

Although very well versed; the narrative leaves out chunks of history to dramatise the partition for the benefit of the audience.

Definitely a bloody account of what happened, also biased. However it was a great listen

This book is badly needed successor to Freedom at Midnight. Very well researched and detailed account of the atrocities committed by both sides: Sikhs and Hindus on one side and the Moslems on the other side. The detailed account of the most tragic figure in this Drama: Mohammed Ali Zinnah, and the ultimate irony. He wanted to build a secular Pakistan. The characters, personalities and the relationship between Pandit Nehru ad Sardar Ballabh Bhai Patel is very revealing.

What was one of the most memorable moments of Midnight's Furies?

The tragedy that played out over the lives of literally 10s of millions of people, was crafted by a British bureaucrat only over a month's time, with practical no knowledge of India. The calousness of the British government how they left India is beyond imagination.

Which character – as performed by Sunil Malhotra – was your favorite?

Enjoyed the book thoroughly. Hajari brings the partition time into historic perspective all the way from the independence struggles of the early 20th century and through to the difficult choices and situations of 1947 to 1950. Both jinnah and nehru are shown to be human. The author is careful in trying to remain as neutral as possible given his south asian roots. this is an essential read for anyone interested in current state of affairs in the subcontinent or interested in the greater knowledge of the painful turmoil of partition.

very informative. I learned a lot

great book, well read. I learned a lot more than I anticipated. got me interested to know more

If you could sum up Midnight's Furies in three words, what would they be?

What was one of the most memorable moments of Midnight's Furies?

Wanted to, but its too big for one sitting

excellent book. the narration was pretty good the only criticism I have is for the butchering of Indian names by the narrator.

This is why India and Pakistan conflict never ends

Nisid Hajari has done his research and provided a good amount of details on India and Pakistan partition. I remember my grandfather telling me some of these accounts and how it was very tense moment in history of India's independence. I was able to relate to many of those incidents that my grampa was telling me that Nisid has put together in this book. I certainly recommend this book if you are a History buff or just interested in India and Pakistan independence time. You will know why certain conflicts never end.
Sunil Malhotra has done an okay job. His pronunciations of certain India and Pakistan city names and people names are bad. Other than that, he keeps it interesting.

The writing style is very incident-based, and therefore can be a bit dense. I was really impressed that the reader was able to take this material and make it much easier to listen to then I would have imagined. Other than a general wish for more analysis in the writing, I felt that this book satisfied my reason for choosing it: to learn more about the history of the Pakistan/India conflict.

What made the experience of listening to Midnight's Furies the most enjoyable?

Overall this book is interesting to learn about Pakistani delusions and biases, but it is clear from the beginning to anyone with a knowledge of South Asian history that the author is heavily biased towards Pakistan. The familiar narrative of Pakistan being the victim of all of its problems coming from machinations of outside powers, not its own deceit and shortcomings readily present.

The book does make an attempt to seem unbiased, but presents information favoring only one side. One would expect better from a prominent author who is also a Bloomberg editor, but because of all of this it does give good insight into the deluded teaching and thinking of Pakistan.

Hajari presents a very balanced and non prejudiced account of the roots of rivalry of two countries and the horrors around 1947 and the failures of national leaders. It presents a very nice contrast of characters of Nehru and Jinnah and the emotions that drove them to their decision making. Nationalists on both sides will take exceptions to some of the characterizations and try to defend the tit for tat horrors of communal riots. However a keen reader would be quick to note the scale of the human tragedy that was partition. The only lesson to be learnt is how political and demographic will has to prevent this form happening again either within or across the border.

To appear Neutral bring both sides to same level

Partition of India happened because there is a certain religion, which thinks it is superior to ball others and so it has the right to rule over all the others. when it saw that it cannot happen, ut decided to form its own nation. Latest example of such an event was Kosovo breaking from Serbia.
All other things are just blabbering.