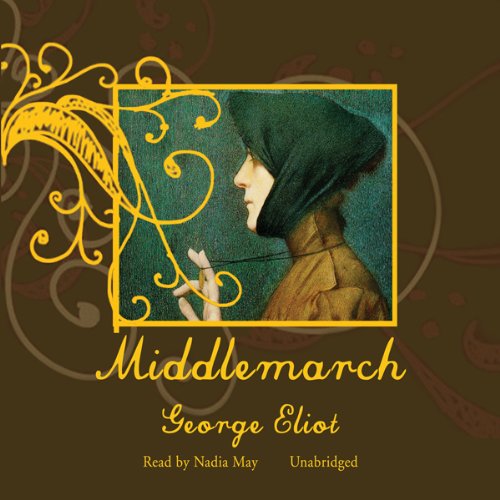 Named for the fictional community in which it is set, Middlemarch is George Eliot's rich and teeming portrait of provincial life in Victorian England. In it, a panoply of complicated characters attempt to carry out their destinies against the various social expectations that accompany their classes and genders.

At the center of the narrative is Dorothea Brooke, a thoughtful and idealistic young woman determined to make a difference with her life. Enamored of a man she believes is setting this example, she traps herself into a loveless marriage. Her parallel is Tertius Lydgate, a young doctor from the city whose passionate ambition to spread the new science of medicine is complicated by his love for the wrong woman.

Epic in scope and unsurpassed in its study of human nature, Middlemarch is one of the greatest works of world literature.

"One of the few English novels written for grown-up people." (Virginia Woolf)
"One of the most profound, wise, and absorbing of English novels...and above all, truthful and forgiving about human behavior." (Hermione Lee)
"No Victorian novel approaches Middlemarch in its width of reference, its intellectual power, or the imperturbable spaciousness of its narrative....No writer has ever represented the ambiguities of moral choice so fully." (V. S. Pritchett)

What listeners say about Middlemarch

What a shame for one of the greatest novels ever written.

I think I recognised the reader's voice under another name from the absolute worst book I've ever read or heard - Kate Mosse's Labyrinth - which put me off, but if you are going to read a book like Middlemarch with a cast of thousands and the characters so diverse and beautifully written, you've surely got to able to make one voice sound different from another. Just listen to Martin Jarvis reading David Copperfield and you will get the point.

And for the reader's benefit "fingers" doesn't rhyme with wringers in any dialect.

Human nature revealed in all its complexity

This book is what audiobooks are for - so many vivid characters brought wonderfully to life by a fine narrator. I couldn't believe she could have so many distinct voices, some of which are quite funny, and keep true to them all through this long book. Fantastic writing, wonderful insights into the human condition in all its grand, foolish, endearing and enraging complexity. This was my first Eliot novel and I look forward to listening to more. I also want to hear more books with this narrator. First rate.

It took a while to get into this because of all the characters involved. For a lot of the book, I only really cared about Dorothea's story. But it gained pace, and I really enjoyed the intelligence of Eliot's observations. I also liked the reading; although it sounded slightly raspy at first, the reader had such a talent for the many characters' voices that it really brought the story to life.

Be Careful for What You Wish

Nadia May is the performer; does one have to say more to indicate the level of excellence of this audio version of this splendid book? She obviously does her homework in order to make the nuances of character and plot alive to the listener. My first encounter with Ms. May happened to be with my first audio book cd, "Pride and Prejudice" from Blackstone Audio. She has an expressive voice which gently nudges the listener to hear details which would go right past a rock headed lump like me.

This is an odd book. Except for Dorothea's little sister, all the characters know exactly what they want and how to get it. They plotted, planned and got it. Then were miserable which goes to prove the wisdom of the fortune teller's advice in "Rude Awakening of a Jane Addict", "Thinking is over rated, humans do entirely too much of it." If we had a fortune teller in this book, she would also advise humans not to always believe their lying eyes. Little sis on the other hand, feather brained creature that she was, happily took Dorothea's cast off suitor, Sir Dull as Dishwater (whatever his name), had a baby with all proper decorum and was ecstatically happy with no planning or thinking at all. Life is just not fair!

Often, I wonder if the will forbidding Dorothea to marry Will which plays such a central role in Middlemarch was inspired by an actual incident involving Charlotte Bronte's brother and the wife of his employer related in her letters and recorded in Elizabeth Gaskell's biography of Charlotte Bronte.

Here is gratuitous advice. If you are new to this pre World War I style of writing, give it time. This is a time before birth control, antibiotics, internet, breaking news and not least, audio books. What would our value system be if based on pre-WWI facts?

This was the first novel I'd "read" of George Eliot's. What a prodiguously talented writer. I enjoyed the story, and considering my short attention span I managed to stay fulling engaged despite the profusion of detail that I suspect "is Eliot". The narrator was just as prodiguously excellent--I stood up and gave her a standing ovation at the end :).

I recommend this listen.

This is a wonderful reading of this classic novel. It is well-paced, and the voice "fits" the text perfectly. The voices of the different characters are well distinguished, without excessive resouce to accents or speech mannerisms. I just loved listening to this, hour after hour after hour after hour... I never wanted it to finish. Oh, and it's a great novel, of course :-)

2 Chapters and your hooked

George Eliot was a brand new author for me. Having seen Middlemarch on DVD I partially knew the story line; well as much as a movie can tell such a rich story. However, the book is so much richer in plot, theory, beauty and action than any movie other than PBS could create. No surprise there! However, for some reason it did take me two Chapters before I became truly hooked. If you find yourself in the same situation, plug along and I believe that you will be very glad that you did.

The characters are very real: a lovely and lonely women with true purpose and hope for life; a mean spirited husband, which is good because you feel NO grief over his demise; several handsome young men with flaws but good hearts; a mix of beautiful young women; physicians, clergy and merchants with the good, bad and ugly mixed in. A life story; that is interwoven so uniquely that you will love reading it. Even the real scoundrels are worthy of the read.

The narrator made listening to it an extra plus. Even though I say this now, I will admit that the narrator's voice initially turned me off ... or it could have just been the opening lines. However, the narrator brilliantly brought each character alive; you could feel their essence. No real need for "He said," and "She said."

Finishing it was like losing friends. THAT is when I know I have read a good book; when I literally MISS the people, feel a loss, want more of them. So, I will reread in six months or so. However, she does not leave you dangling like some authors do. You do find out what happens years later. So, if you enjoy good plots, laughter, sadness, great richness of characters, along with a better understanding of the period time then THIS book is for you.

I tried to read this book once or twice over the years and just couldn't get into it. I have vague recollections of not resonating with Dorothea, and giving up when she considers marrying Casaubon. But, due to Nadia May's perfect reading, I now consider this novel to be one of my favorites. There was something about May's inflection that helped me to really understand and admire Dorothea, not to mention several other characters with whom I had hitherto been unable to sympathize. In an attempt to avoid giving anything away, I will resist the urge to copy and paste the last paragraph of the novel here, but suffice it to say that I think making it to the last paragraph would make reading this tome worthwhile even if it din't contain all of its other myriad charms. I will definitely be reading more George Eliot (and listening to more Nadia May) in the future.

This is such a brilliant reading of one of the great english novels - the reader captures the regional dialects perfectly, and under her hand the characters come to life (LOVE Mr Brooks!!). I can't imagine it being done more proficiently. For those that don't know the novel it is a penetrating look at human frailties and strength, love, greed, and above all how selfishness can drive and destroy. Worth every penny -not only do you get value for money, but you also get to feed your soul.

excellent, thoroughly enjoyed, super long - 4 downloads!- but that only meant more pleasure, things got ever more lovely and interesting as the story advanced, pure pleasure, little shivers at the end :) this is the second book from nadia may i've listened to- she does an excellent job

Middlemarch is a monster of a book! I had to read this for a class and if I had not had audible to make the best use of my time, I would never have succeeded. I had been reading it for awhile before I purchased this audible version. The narrator made this book come to life for me! It is a difficult read in the first place, but with the help of Nadia you just might make it! Her accent and voices for different characters is very helpful! The first half of the novel is very slow, but picks up toward the end. If you stick it out, its well worth it. Definitely not a page turner, but very thought provoking and delightful - worth every effort!