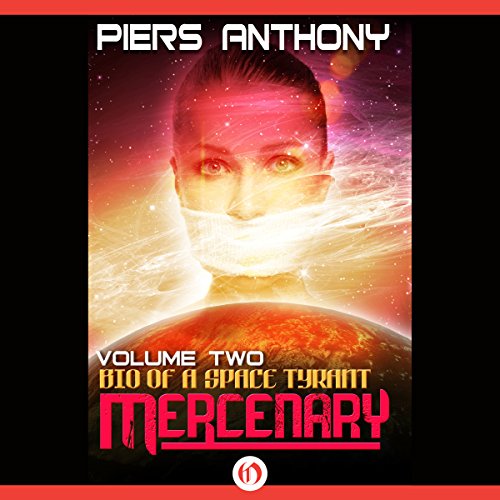 Scourge of the Ecliptic

He was driven by violent injustice from his home moon of Callisto - and set forth to claim the epic destiny that would blaze across worlds and time. He saw his family destroyed, his sister carried off into sexual slavery, his beautiful lover killed - and he swore revenge against the murderous pirates who held the Jupiter planetoids in a stranglehold of terror.

Fired by raw courage, steeled by young might, he rose in the navy of Jupiter to command a personal squadron loyal to the death. And it was death they faced - against piratical warlords of the Jupiter Elliptic who laughed at the young commander's challenge...until they met the merciless fury of the warrior who would annihilate all obstacles in his path to immortal renown as the tyrant of Jupiter.

What listeners say about Mercenary

Sci-Fi at its trashiest best

Would you consider the audio edition of Mercenary to be better than the print version?

No, on a par but not better

What other book might you compare Mercenary to, and why?

This is sci-fi at its most enjoyable meaningless least serious trashy best. On a par with Starship Troopers.

Some of the accents hit me as comical but lets face it they suit the genre.

Superb story, remember reading it when I was younger. Huge lasting impact.

The narration is a little dry, but kind of fits the perspective.

Certainly going to listen to the rest of the series.

Read most of the books in the series in hardback form many years ago. Going back in Audible forma
t

Buckle up, again. This time for more fun.

Unlike Refugee, this book is more military sci-fi and not nearly as dark and hopeless as. Many fun battles and interesting love interests (seriously Hubris pulls). In the life of Hope Hubris this is the "fun years". The writing and stories are still as entrancing as those in Refugee, with less doom & gloom. Just like Refugee you will not want to stop listening.

another great audio book from audible. Anthony's 2nd book in this series builds momentum for part 3