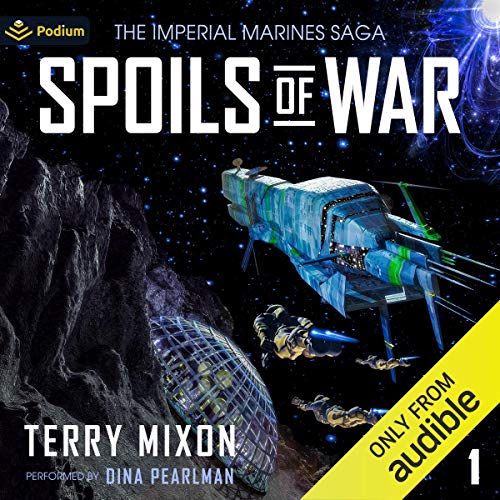 By: Terry Mixon
Narrated by: Dina Pearlman
Try for £0.00

They thought they could force her to conform. They were wrong.

Inside a dystopian school in the Singularity, the 12-year-old girl known as One Twenty-Four struggles to survive. Failure to conform means death at the hands of her teacher. Assuming her clone sisters don't kill her first.

The Terran Empire has tasked Imperial Marine Lieutenant Grace Tolliver to lead her platoon into the Singularity as a privateer. Her mission: to tear a great bloody strip off their enemies and to take anything that isn't nailed down. The collision of this unlikely pair will change the humanity in ways that no one could predict. If they survive.

Author's note: This novel takes place more than five centuries before the Empire of Bones series, and the events unfolding here have implications there.

What listeners say about Spoils of War

no spoiler, but it took 12 chapters before I knew the link to The Empire of Bones Saga, it was never explicitly stated and I like that. looking forward to the next one ( both series) worth a listen

What a great story line from the bones

I loved this book it brought out a great character from the bones. Background and buildup was a great story with careful planning. Can’t wait to se how this family comes together. Thanks Terry
P.S. I miss Veronica the new narrator is just as good I just like the old one.

Someone give this lady a pronunciation guide please! Adjutant and route were butchered so often it grated on my nerves! And she pales in comparison to Veronica G who narrated the other series in this universe. I’ll give her one more try for book two before I go to the ebook only with this series.