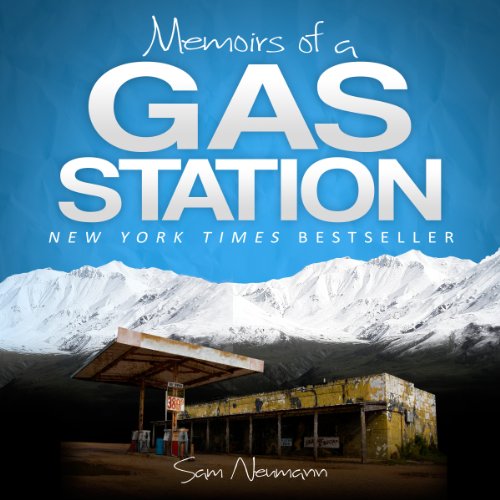 Memoirs of a Gas Station

By: Sam Neumann
Narrated by: Daniel David Shapiro
Try for £0.00

Early one May, Sam Neumann arrived in the breathtaking wilderness of Denali, Alaska with a smile on his face and adventure in his heart. But less than 24 hours later, both had evaporated as he stood behind the counter of a filthy gas station - his new place of employment - and tried to piece together what exactly had gone wrong.

Memoirs of a Gas Station is a New York Times best-selling personal account of a summer trapped in a convenience store on the edge of Denali National Park. It is a journey across the Alaskan tundra and headlong into the ridiculous world of seasonal employment.

The summer began with shock, horror, and denim shirts as Sam struggled to accept his new role as a gas station employee. To escape it, he took to the forests of Denali at every free moment, soon finding himself face-to-face with an angry adult moose, shivering numb trying to last the night on a frigid mountainside, and being seduced by a Mormon divorcee.

Often satirical, sometimes introspective, and always brutally honest, Memoirs of a Gas Station takes you on a raucous ride through the best and worst summer of one man's life. From booze-soaked employee parties to one very awkward romantic episode in a tree house, Sam learned more than he ever planned about the Last Frontier. But weekends spent stumbling through seedy Alaskan bars and hitch-hiking to remote destinations gave him a unique perspective on life, and led him to find friendship, adventure, and love in the most unexpected places.

What listeners say about Memoirs of a Gas Station

This is a great book, it is funny, realistic, and slightly educational. His adventure working in Alaska reflects the trials and tribulations of working as a seasonal worker in Alaska. The narrator does a great job and is easy to listen to.

If you are thinking about getting this book, you should, you will not regret it.

This book is not about Denali

Yep, this book is not about Denali or hiking in it; I don't know why I thought it was. I've discovered, belatedly, that it's a memoir by a twenty-one (?) year-old pouty, entitled white guy who thinks this is the worst summer of his life. I'm half way and he's hardly set boot upon tundra but has had a lot of problems with his job, his fellow employees, his uniform. Rock bands and sports are other favorite topics. If you enjoy this sort of thing, go for it.

I didn't hate it.

the whole thing seemed like a book report. I'm sure this book ia for someone.

If I ever met Sam I'm positive I wouldn't like him. He seems whiny and arrogant. I struggled to finish this book. It was extremely uneventful.

If you enjoy first person narratives with a cast of quirky characters and a decidedly politically incorrect delivery then this is the book for you.

Sam has a straightforward and wry way of writing. You do really get a sense of majesty when he describes the Alaskan landscape. I felt like I was experiencing the Alaskan summer along with the author!

What a well-written memoir and one of the most pleasurable listens I've had in a long time. Do you ever remember those awkward Summer jobs you took while you were discovering yourself? This is like that x10. Funny, full of odd adventure, and just smartly entertaining. There is nothing I didn't like about this insightful look into one man's odd but interesting life experience in one of the most fascinating places on Earth.