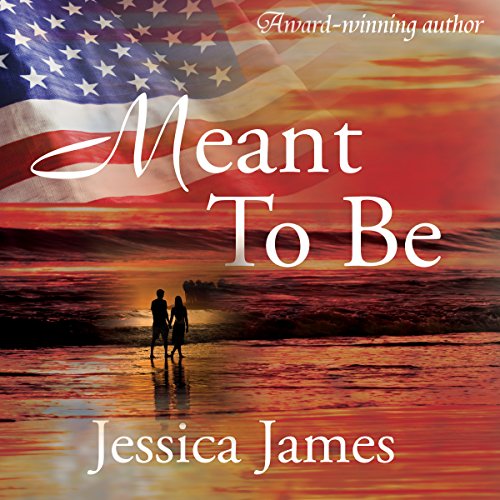 What do you do when the person you most want to protect is the one risking everything to make sure you survive?

When Lauren Cantrell said goodbye to the guy she had just met on the beach, she had no way of knowing their paths would ever cross again. But fate had another unexpected meeting in store for them - this time in a place where danger was part of the culture and the stakes were life and death.

The last person in the world Michael "Rad" Radcliff expected to see at a special ops briefing in Afghanistan is the girl he met at the beach two weeks ago - the one he can't stop thinking about.

From the sundrenched beaches of Ocean City, MD. to the snowcapped mountains of Afghanistan, this thrilling tale of espionage and intrigue takes listeners on a spellbinding journey into the secret lives of our nation's quiet heroes - and answers the question: What do you do when the person you most want to protect is the one risking everything to make sure you survive?

Meant to Be recounts the dedication of our military, the honor and sacrifice of our soldiers, and a relationship that is tested and sustained by the powerful forces of love, courage, and resolve.

What listeners say about Meant to Be

The narration was good and the storyline different with a unique twist, however some of the elements were a bit far fetched.

The characters are flawed, strong, and brave and I cannot help but cheer for them. The novel makes the reader appreciate the sacrifice of the United States' brave men and women serving at home and abroad.

So much more than romance

Meant to Be: For Love of Country 5 Stars
By: Jessica James Narrated by Stella Bloom

I loved this book! It’s definitely a 5-star read. I’m not usually a “romance” reader, but this is so much more than romance. The suspense kept me on the edge of my seat. The action was so real I couldn’t stop reading, and the drama made it so much more intriguing.

I highly recommend Meant To Be to readers of all genres; The writing was perfect; the imagery made me feel as if I was there and the perfect amount of information was given just when needed. I now have another favorite author to follow.

Meant to Be will stay with me for a long time!

Wow! Talk about having an impact! This is, I suppose, a military romance. I really hate to label it that, because the level and depth of this novel is so far above and beyond anything I've read for a long time.
Ms. James' coverage of military covert operations is simply terrifying to this military wife. It brings up images no one in their right mind would like to imagine if they have loved ones in the military. This story is brutal, but leaves you unable to stop listening (or reading). She manages to weave hope and love into the story of military patriotism, conviction and desolation.
The two main characters, Lauren and Rad, meet on a beach and have twenty hours together before, unknown to each other, military duty calls them. They separate, never knowing if they will see each other again. Fate and duty throw them together a second time, only to separate them again. Military operations take precedence over everything else. Hardships are endured, wills brought to the breaking point, but the heart of each is still searching for the other. Will they find their way back together before there is nothing left for either to give?
Meant to Be will stay with me for a very long time. Excellent!
I was given this audio book. The opinions are my own.

This book was AWESOME

I received this audiobook free for an honest review. OH.... MY.... GOSH!!!! This book was excellent. The author wrote a quality story with distinctive characters. There were all the ingredients for an awesome story. Something that you would see on the big screen. I, literally, couldn't put this book down. I was almost late for work because I was up so late and didn't want to get out of the car in the morning so I could finish it. The narrator did an excellent job with each of the characters and portrayed each personality with finesse. Loved this book and will look for more by Jessica James.

I love a good military romance. This one starts out with the two main characters Lauren and Rad meeting on leave and spending 24 hours together... unsure of if they'll ever see each other again. All of a sudden they're both back on the job and Lauren is in danger as a CIA operative providing intelligence to Rad's special operations team. In every heart rending moment you come to love this couple all the more and pray for their safe return to one another because if you're like me you know they're just &quot;Meant to Be&quot;. I absolutely recommend this novel and hope it becomes the first in a series following that special &quot;special ops team&quot; Join me in reading this story and soon you'll be rooting for them too.

Great beginning to a series

Up front, I have to say I loved this story and loved it on so many levels. Kudos to the author, Jessica James, for how she structured her book. I loved the prolonged twenty-four-hour first day. It really laid the foundation for the book and for both the personalities of the main characters, Rad and Lauren. It’s a little unusual and a bit of a risk, but a definite plus with this book.
Rad and Lauren are cagey with each other in regard to their jobs, but it’s clear to the reader that they’re on a collision course with each other in the near future. James gives each main character a distinct point of view and ample time and space to unfold for the reader. I also appreciated that she had done her homework for military jargon and procedures. (A personal pet peeve of mine.)
The suspense builds and ebbs perfectly to keep the story moving along. The action is tightly written, keeping the reader fully engaged throughout the book. I enjoyed how the plot continuously moved forward, building to a great ending. I was also happy to see that this book is the first in a series. More to come – joy!
The narrator gave Lauren a perfect voice and I wasn’t bothered when she took on the male points of view either; that’s what usually sours me on audiobooks. She had a lovely tone and perfect enunciation. It made a several hour drive much more pleasurable.
Absolutely recommend this book and author.

Lauren Cantrell thinks she is going to spend a quiet day at the beach, until Michael “Rad” Radcliff, a special ops officer who’s taking a much-needed break, comes along and shows her the time of her life all in one fateful day and night. Neither really knows anything about each other, but Rad is certain he’s found his soul mate. Lauren is a little more reticent certain that their romance was for one night only. When they meet again at a special ops briefing, danger and intrigue may bring their unexpected romance to an end.

One of my favorite sub-genre is military romance and this audiobook, which clocks in at just over 8 ½ hours is the best I’ve heard in quite awhile! It’s an intense listen and the violence is fairly graphic, but to me, it made the story all that more realistic.

Narrator Stella Bloom does an excellent job in this fully voiced production and does an amazing turn at voicing Rad.

I hope author Jessica James has more military romance to pen. She knows how to mix the perfect blend of romance and adventure.

This audiobook was gifted to me in exchange for an unbiased review!

I was provided this audiobook at no charge by the author, publisher and/or narrator in exchange for an unbiased review. I've never known this author prior to this audiobook listen and review and honestly probably wouldn't have purchased this audiobook if the narrator wasn't one of my favorites. I have found that if I find a narrator that I love, I will take a chance on an unknown to me author. Since I knew the narrator and already love her work, I was happy to listen and review this audiobook and was happy to find a great CLEAN Military Romance. Now that I've found Jessica James and her excellent writing skills, I will be keeping my eye out for more of her work and hope to find her audiobooks are narrated by a great narrator. I've listened and reviewed too many not so great authors and when the narrators are sub-par, it just gets worse so that I'm not as eager to listen and review just anything any longer. Sometimes a great narrator can even make an okay writing job sound great and still be enjoyable, but sometimes nothing can make it better. This audiobook was both great writing and great narration and very enjoyable. I highly recommend this audiobook.

Do you believe in love at first sight?

If you don't believe in love at first sight, don't read this story. It pushed the limit a bit for me, but, all in all, it was a good book. I had hoped for a little more of the 'active' part than the 'love story', but, the writing is good, and the narration by Stella Bloom was very good.

The story was very good, interesting and inspiring. There were a lot of good characters! The narration is also very great. I received this audiobook for free at my request and I have voluntarily left this review.