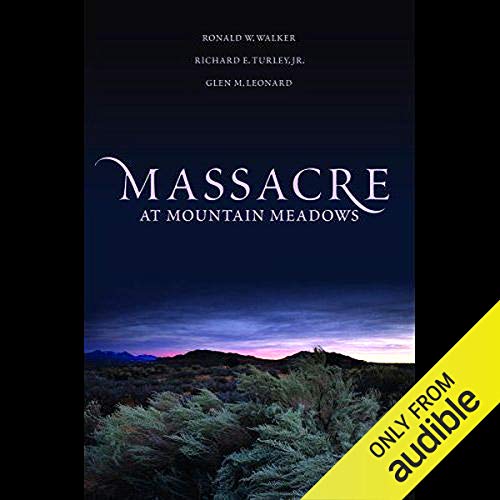 On September 11, 1857, a band of Mormon militia, under a flag of truce, lured unarmed members of a party of emigrants from their fortified encampment and, with their Paiute allies, killed them. More than 120 men, women, and children perished in the slaughter.

Massacre at Mountain Meadows offers the most thoroughly researched account of the massacre ever written. Drawn from documents previously not available to scholars and a careful re-reading of traditional sources, this gripping narrative offers fascinating new insight into why Mormons settlers in isolated southern Utah deceived the emigrant party with a promise of safety and then killed the adults and all but seventeen of the youngest children. The book sheds light on factors contributing to the tragic event, including the war hysteria that overcame the Mormons after President James Buchanan dispatched federal troops to Utah Territory to put down a supposed rebellion, the suspicion and conflicts that polarized the perpetrators and victims, and the reminders of attacks on Mormons in earlier settlements in Missouri and Illinois. It also analyzes the influence of Brigham Young's rhetoric and military strategy during the infamous "Utah War" and the role of local Mormon militia leaders in enticing Paiute Indians to join in the attack. Throughout the book, the authors paint finely drawn portraits of the key players in the drama, their backgrounds, personalities, and roles in the unfolding story of misunderstanding, misinformation, indecision, and personal vendettas.

The Mountain Meadows Massacre stands as one of the darkest events in Mormon history. Neither a whitewash nor an expose, Massacre at Mountain Meadows provides the clearest and most accurate account of a key event in American religious history.

Would you try another book written by the authors or narrated by Bill Dewees?

it's from the history of the LDS.

Could you see Massacre at Mountain Meadows being made into a movie or a TV series? Who would the stars be?

Yes that would be great.

Try: Blood of the Prophets: Brigham Young and the Massacre at Mountain Meadows

Crime has its own momentum

"But crime has its own momentum. Once begun, its perpetrators find it hard to draw back, if only to hide what has already taken place."
- Walker, Turley, Leonard; Massacre at Mountain Meadows

This is the second book about Moutain Meadows Massacre I've read. The first was the seminal work by Juanita Brooks The Mountain Meadows Massacre in 2016. Brooks' book was published in 1950. This one was published in 2008 (so, 58 years later) by Ronald Walker (a Mormon historian in SLC), Richard E. Turley (at the time Assistant Church Historian, but now Managing Director of LDS Public Affairs), and Glen M. Leonard (former director of the LDS Museum of Church History and Art).

The amount of access to church archives and history has changed considerably between the 1950s and the 2008. The Church recognizes that it can't spin, hide, or dissemble (too much). So, the authors of this book were given access to a lot of information that might have been useful to Juanita Brooks. It is interesting to note that while Juanita Brooks was never formally disciplined, she WAS blackballed from Church publications when writing her work. Turley, on the otherhand, got a promotion. So, somethings have changed.

The book's narrative is clean and it introduced several facts that showed exactly how actively and passively members of the LDS community bore huge responsiblity for this action. Brigham Young, George Albert Smith, Isaac Haight, William Dame, and obviously John D. Lee, all shoulder huge aspects of responsibilty. This is something that could have easily NOT happened if more people were willing to stand up, refuse, or question leadership OR if leaders hadn't used such paranoid, angry, and inciteful rhetoric. There is plenty of blame to go around with this.

Overall, this was a balanced and responsible work. I'm excited (excited is the wrong word) to read Will Bagley's history. I know that Bagley's account places even more responsibilty on Brigham Young's shoulders.

Was the mountain meadows massacre an attack led by Mormons, on innocent immigrants? Yes, but to accurately judge a historic event like this you really need to examine surrounding events that led up to this point. The authors are not (as other reviewers have mentioned) 'trying to make the Mormon church look good', they are trying to give you an accurate window into the lives of Mormons at that point in history. By doing this, the authors help us gain better understanding and insight into what the Mormon people might have been thinking and feeling at the time and WHY this tragic event happened. The authors of this book did an excellent job. If you read the preface you will find that they were aware of their potential biases and they explain the steps they took to give the reader an accurate and unbiased account of what happened. They included information from as many primary sources as were available. This is a very well researched book and if you have a physical copy of the book, you can see that about 1/3 to 1/4 of the book are pages dedicated to citing their sources.

Slow to get started - not fully balanced.

I was a bit nervous when the authors "confessed" they relied on the church for much of thier research. At least the first 3/4 of the book a felt a bit like I was being manipulated, but when the bad things start happening the authors do not try to pull punches. I agree with thier thesis about the event, but I do think they tried a bit hard to not point the finger at the church - no possiable justification for the actions is too small to be discussed (often repeatedly) and no proof of the dissappointment of church leaders int he action is to small to discuss. The pacing is VERY slow for much of the book with lots of degressions and information of little importance.

Very fair and balanced account of this incident. Places blame squarely on the shoulders of those who actually committed the massacre. This book vindicated the Native Americans of atrocities committed by Mormons but previously attributed to them. It was also very fair to the immigrants and did not seek to justify the massacre based on threats made or immigrants claiming to have killed Joseph Smith. Overall very interesting.

I think this is one that will make more sense the second time listening. Appears to be well-researched and a good attempt at presenting as factual a representation as possible to a very difficult moment in Utah history.

I should have read the other reviews first.

At least I got this on sale. This book was incredibly tedious and monotonous. Unlike other books on historical events, the authors seemed to make almost no attempt to make us care about the individuals involved. Contrast this book with "Desperate Passage", for example, which was about the events surrounding the Donner Party. In "Desperate Passage", we receive a lot of background on the individuals involved--why they moved West, who was in their family, what their personalities were like, etc. So when we got to the main drama of the story, we were fascinated by what happened to the characters we had come to invest in. In "Massacre at Mountain Meadows", we are given almost no reason to care about either the perpetrators or the victims of the massacre--although I do agree with the other review that says we are given more reasons to care about the perpetrators.

I will admit that I only listened to 3/4 of this book before giving up. I rarely give up before the end. But after multiple times of falling asleep in the second half and then going back to try to find my place, I finally realized that I had no obligation to torture myself any longer. If you enjoy reading history textbooks for fun, you might get something out of this dry recitation of times and places. If you prefer tales of history that bring the story alive, try "Desperate Passage" instead.

I was disappointed in this book. The reader was monotonal, and everything seemed to run together. There didn't seem to be any cohesion. I quit listening during the second part.

Well researched and presented. Enjoyed listening to and looking up references on my hard copy.

Too much peripheral detail.

Story was lost in side-bars and not enough detail on massacre. Follow up chapter should explain US response.

Didn't get what I thought I was getting

I was looking for a novel, and I got a verbal documentery. I would return this book if I could. Simply not what I wanted.