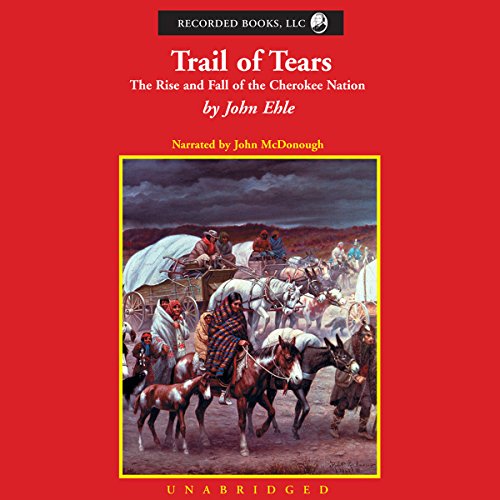 The Rise and Fall of the Cherokee Nation
By: John Ehle
Narrated by: John McDonough
Length: 19 hrs and 13 mins
Categories: History, Americas
5 out of 5 stars 5.0 (1 rating)

A sixth-generation North Carolinian, highly-acclaimed author John Ehle grew up on former Cherokee hunting grounds. His experience as an accomplished novelist, combined with his extensive, meticulous research, culminates in this moving tragedy rich with historical detail.

The Cherokee are a proud, ancient civilization. For hundreds of years they believed themselves to be the "Principle People" residing at the center of the earth. But by the 18th century, some of their leaders believed it was necessary to adapt to European ways in order to survive. Those chiefs sealed the fate of their tribes in 1875 when they signed a treaty relinquishing their land east of the Mississippi in return for promises of wealth and better land. The U.S. government used the treaty to justify the eviction of the Cherokee nation in an exodus that the Cherokee will forever remember as the "trail where they cried". John McDonough narrates with thoughtful gravity. The heroism and nobility of the Cherokee shine through this intricate story of American politics, ambition, and greed.

What listeners say about Trail of Tears

Although I have lived in Northeast Oklahoma for the past fifty years, I had no idea of the politics, greed, and terrible unfairness that generated overtaking Cherokee land and lifestyle in pursuit of a “superior, civilized, Euro-American culture. This audiobook tells that story in horrific, painful detail. It is history alive, very informative and a pleasure to listen to. I would recommend this volume to anyone who still believes that the American History has been kind to indigenous people and our slave-based economy. It was a very narrow time for the “land of the free” and “home of the brave. “

The treatment these Native Americans suffered at the hands of these invaders was outrageous. History of these type situations was not taught in my history classes.

Will people ever learn to live by the Golden Rule? We all look the same under the skin.

Very informative. Andrew Jackson was a villain, as I had supposed, but one enmeshed in a political climate such that he had no option - but he could have been less of one. John Ross was a calamity, and basically destroyed his own nation by his willful blindness and fundamental political rapacity. And the people and government of the state of Georgia - where part of my family lived - were evil.

Not really about the Cherokee Nation

I was disappointed by this book. The title and subtitle led me to believe that it was primarily about the Cherokee Nation. I
an fact it was more about the actions and behavior of a handful of people who should have stood up for the Cherokee, but betrayed their people for their own personal financial benefit.

Everyone Should Know This History

Very long but well worth the listen. I listened to this during the 2016 presidential campaign wherein
one of the candidates wants to build a wall to keep people from other countries out of the USA. Oh the irony.

Good but too convoluted

its just too much information. interesting at points but i think could've been condensed somewhat.

I would make it flow together in a easier to follow manner.

What could John Ehle have done to make this a more enjoyable book for you?

I am not sure. There had to be some much info to sift through and put together in a way that one not familiar with the history could follow. I could only listen in segments because of my driving days. So, sometimes, I found it difficult to resume the story because I could not keep all the characters straight. But I am glad I read it. It was an eye opener for the politics of what all sides went through in that part of our history.

Too long since I finished it to remember. Sorry.

Do you think Trail of Tears needs a follow-up book? Why or why not?

Not sure it would help.

If you could sum up Trail of Tears in three words, what would they be?

The performance of Audible was horrible and left me Frustrated by having to start it all over again every time it stopped. It stopped every 5-10 minutes, sometimes more often. I got Audible because I have no time to read and wanted to be able to listen while I work. This makes it almost impossible.