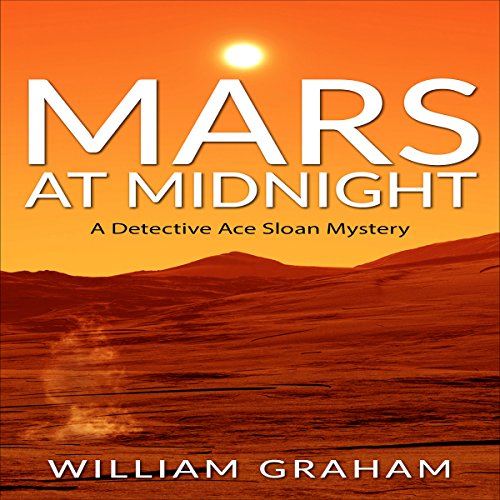 Detective Ace Sloan (The Red Planet Murders) returns in this exciting and compelling murder mystery from author William Graham. Set in the Martian colonies in the 22nd century, Detective Sloan must solve the murders of two immigrant women found buried in the Martian dunes and of a famous college professor. What is the connection between the murders? Sloan and his rookie colleague Detective Kate Hammer uncover a secret political conspiracy as they try to solve the crimes. This work is a fast-paced thriller with a political intrigue and edge to it.

The beauty of Mars

An enjoyable short detective story set in the newly settled areas of Mars. In contrast to the more forward thinking government, the members of the corporations want to maintain the planet for the wealthy professionals, allowing only a few poor immigrants to fill the unpopular drudgery positions such as cleaners and farm labourers. Meanwhile, on Earth, as conditions continue to deteriorate, increasing numbers of people with little hope of ever improving their lifestyle above subsistence level, and looking to Mars as their future.Sent

The body of a young Hispanic woman is found buried in sand miles away from the habitats. Who is she, and how did she get there? Veteran chief detective Ace Sloane of Liberty Police Force and rookie detective Kate Hammer work together to solve this, and other, murders uncovering a larger political conspiracy and widespread prejudice.
Somewhat surprisingly, the narration is not by Richard Wilson who read the earlier stories, but by Leslie Starr O'Hara whose strident voice was initially difficult to relate to the subject matter. However, her reading was clear and delivery good, even if there were disconcertingly long pauses between chapters.

Mars at Midnight is the next in the series of Ace Sloan Mysteries. The Martian atmosphere will kill you instantly if you are subjected to it. This is also what some of the people inside the colonies are wishing for too. They want it bad enough to kill. Detective Sloan and his new partner Kate Hammer will try to solve a new mystery in this new short story.

The narration was done by Leslie Starr O’Hara who does a wonderful job narrating as the main female character in this short story. O’Hara also is able to capture Detective Ace Sloan’s character pretty well. I’m always intrigued when I see a female narrator for a male drive book — but this one actually ended up being split more than I realized. O’Hara does a great job and I will definitely be looking for more books narrated by her. The quality of the recording was also really well done, I listened on headphones and heard zero mistakes.

I’ve read all of the Ace Sloan Mars Mystery books and none of them have let me down. Like a real old-school “whodunit” just when you think you know who the killer is, the plot takes a turn. Graham has a wonderful way of mixing the old school mystery novels into a new and fun Martian climate.

Sloan is the perfect “gumshoe” detective using old school methods and thoughts to solve murders while in this story, his new rookie sidekick Kate Hammer adds a young and new perspective to the whole thing. I like Sloan, but I found myself really enjoying Hammer even more. She is one of those caring yet carefree characters that I find myself falling for in novels.

Audiobook was provided for review by the Author.

This is the fifth book I’ve read/listened to by this author and I would listen to another.
Sloan gets more of a front seat in this book than a few others. Regardless, there is more to the story than just the mystery. We get more of a glimpse into life on Mars.

This is the first book I’ve listened to by this narrator ( Leslie Starr O’Hara ) and I would listen to another. She did well with the character voices of male and female. The story is written as a retelling of events, her narration matches well with this.

A quick and entertaining mystery.

With a good Narrator this quick Audio book will entertain most listeners who enjoy this genre.

Mars at Midnight: A Detective Ace Sloan Mystery.
What could be described as a cosy murder mystery set in the future on Mars.
A pleasant easy listen,. It is hard to pack everything needed for a mystery into a novella but the author manages this very well.
Narration is good and carries the story along at a great pace,
I was given a free copy of this audio book at my own request, and voluntarily leave this review.
All in all - entertaining.

First, I have to start off by stating that I got this book free of charge in exchange for a review, but as I always state, this does not in any way impact my review. My reviews are always honest and my own.

I like this book and I see that Mr. Graham has authored others that I intend to read. There is a lot of action packed into its pages and the story was never boring. It does need the attention of a good editor though because there are numerous typos that were a bit annoying but that did not detract from my overall enjoyment of the book. A great read for everyone who loves the criminal element with a little romance thrown into the mix.

This book was given to me for free after I requested the first book in the series and I provided this voluntary review.
These short stories are good but this one gets a little heavy handed with the politics. This story emulates some of the immigration policies that are being discussed in the U.S. today, but I’d hope in the future, when we are colonizing Mars, we’d have this all figured out. This book is a murder mystery, but it really comes down to the politics of Hispanic immigrants not being welcomed by the upper elite on Mars. The whodunit part of the book is entertaining but it’s hard to get over a few of the stereotypes.
The narrator is different from the first two books. The new narrator was ok, but it really throws me off when a narrator is switched between books.
Overall this was a decent short mystery story if you can get past the odd politics on Mars.

Short story. Hard to identify with the characters

I received this book from the author and agreed to review it. I typically read books that are long and this allows for more time to identify with the characters. This was a lot shorter and it felt rushed....like it was time to reveal stuff just as it could have delved into things a little more. I would have liked to understand more about the social divisions and groups with differing ideals and visions for the future of the Mars colony. The narration was good.

Detective “Ace” Sloan is investigating a murder in the outlands of Mars. The body of a young woman is found by a tour group. Apparently left to die in frigid red sand. Ace and his new partner, Kate Hammer, work to uncover what becomes a Martian serial killer. A story that has today issues intertwined.
Do not let the Mars title and setting dissuade from a good straight forward mystery.
I found this to be a enjoyable read/listen
I was voluntarily provided this free review copy audiobook by the author, narrator, or publisher.
Note: When selecting books to read or listen to for reviews I try and select authors and stories that interest me. Sometimes I am fortunate and other times not so fortunate. Either way, I try to review the books with integrity

Narration problem continues for the series.

Would you try another book from William Graham and/or Leslie Starr O'Hara?

I also have the fourth book of the series in my library. I will review that next.

Both book 1 and 2 had narration issues and they continue in this book too. The narrator doesn't express any emotion at all and mechanically reading the story line by line. The different characters did get their different voices this time, but all of them are flat and devoid of any emotion. This seriously needs some work.

Probably not. Maybe an one hour long Amazon Prime Video movie release will be better option for this book.

It's a conspiracy... I'm hooked on this series

I'm really enjoying the Detective ACE Sloan books. He's a very interesting character and the setting on Mars makes things even more interesting. I love the writing, it's so vivid that I can picture everything happening in my head.

This is a mystery story that stays a mystery until the end, there's nothing obvious about it which makes it much more fun.

The narration is spot on for the story, the character voices are excellent and the delivery helped me get totally wrapped up in the story.

This book was supplied free by the author/narrator/publisher and I voluntarily wrote this honest review.