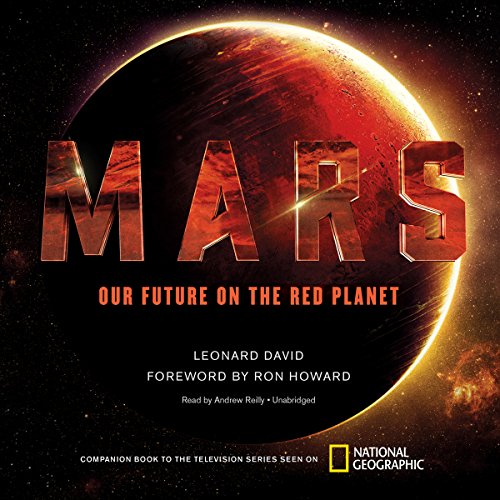 By: Leonard David
Narrated by: Andrew Reilly
Try for £0.00

An inspiring exploration of the establishment of humans on Mars - tying into the National Geographic television documentary series Mars.

The next frontier in space exploration is Mars, the Red Planet - and human habitation of Mars isn't much farther off. In October 2015, NASA declared Mars "an achievable goal"; that same season, Ridley Scott and Matt Damon's The Martian drew crowds into theaters, grossing over $200 million. Now the National Geographic Channel fast forwards years ahead with Mars, a six-part series documenting and dramatizing the next 25 years as humans land on and learn to live on Mars. Following on the visionary success of Buzz Aldrin's Mission to Mars and the visual glory of Marc Kaufman's Mars Up Close, this companion book to the Nat Geo series shows the science behind the mission and the challenges awaiting those brave individuals.

What listeners say about Mars

An interesting yet unfulfilling exposition.

With all good intentions the author tries to introduce many concepts of a possible life on Mars while assuming very little knowledge beforehand, however in this attempt the book becomes flaccid in its treatment of the base material with little scientific insight except quotes and some descriptions.

Sadly I had hoped for a more Pro and Con on different essential subjects for life on mars and less an exposition of Life on Mars and a light brush on the psychological and ethical ramifications.

Much of this already seems dated.

I suppose the authors and Ron Howard had no way of anticipating the rise of SpaceX. They are currently making big bucks contracting with NASA and other agencies to do things in space for a fraction of the usual expense. These profits are plowed back into SpaceX’s grand plan to colonize Mars. At this moment, their Starship(one in a series of prototypes under construction) is poised to make its first 15 kilometer hop. The booster for Starship is currently under construction at Boca Chica, TX. This enormous rocket powered by 28 Raptor engines, besides being the most powerful ever built, will be reusable with less than a 24 hour turn around. This is all privately funded and moving at a breakneck speed.
A good half of what is theorized in this docudrama has been rejected offhand by SpaceX engineers. The plan is to move large amounts of infrastructure and robotics to Mars in advance of a very large crewed mission followed by another and another. Small exploratory missions are out of the question. SpaceX is a private company run very differently than NASA or even Boeing and ULA. They believe in test and fail and learn. They measure their progress by the rate of innovation. Everything is made “in house.” There aren’t cost overruns and supplier holdups. It is an amazing thing to behold. The real story is unfolding before our very eyes rendering this narrative a bit passé. Maybe Ron Howard should do a remake and get up to speed.

A must read for a Mars enthusiast. Helps the reader envision a future trip to the red planet

Good story hybrid with facts and keep me coming back for more. I may reread it again later on

I usually take a star or two off for science/tech books I discover are five years old or more. This was still an interesting and enjoyable listen. Still worthwhile.

I recommend this for anyone who thinks they may have even a fleeting interest in outer space exploration. It provides much more than merely the expected discussion of technology; though it does do that, and does it quite well. But it also includes a historical overview of space exploration, an outline of the policy debate on pro-moon vs. pro-Mars exploration camps, nods to the leading sources in popular works on the subject (Zubrin, Bradbury, etc.), a thorough exploration of on-earth simulation sites, and a discussion of observed and hypothetical health / mental health / sociological issues for pioneers of space travel.

A soaring look into our future on Mars

After listening to this, I feel my delay in watching the series it ties into is a mistake I should correct very hastily...the author provides a wonderfully effective and engaging, not to mention well-rounded and thought out look into the human future of Mars. The narration was a slight bit bland at times, but is certainly satisfactory and does not detract from the overall effect by any means