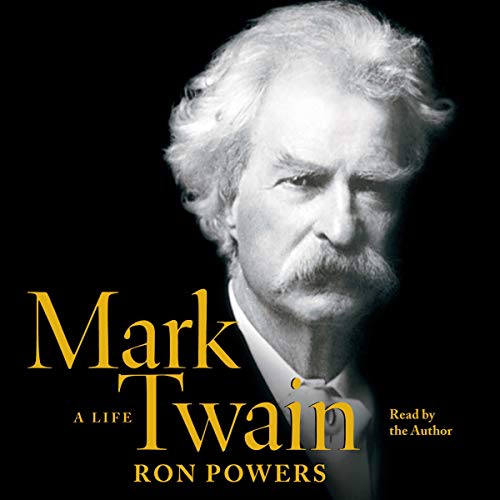 Mark Twain founded the American voice. His works are a living national treasury: taught, quoted, and reprinted more than those of any writer except Shakespeare. His awestruck contemporaries saw him as the representative figure of his times, and his influence has deeply flavored the 20th and 21st centuries. Yet somehow, beneath the vast flowing river of literature that he left behind, books, sketches, speeches, not to mention the thousands of letters to his friends and his remarkable entries in private journals, the man who became Mark Twain, Samuel Langhorne Clemens, has receded from view, leaving us with only faint and often trivialized remnants of his towering personality.

In Mark Twain, Ron Powers consummates years of thought and research with a tour de force on the life of our culture's founding father, re-creating the 19th century's vital landscapes and tumultuous events while restoring the human being at their center. He offers Sam Clemens as he lived, breathed, and wrote, drawing heavily on the preserved viewpoints of the people who knew him best (especially the great William Dean Howells, his most admiring friend and literary co-conspirator), and on the annals of the American 19th century that he helped shape. Powers's prose rivals Mark Twain's own in its blend of humor, telling detail, and flights of lyricism. With the assistance of the Mark Twain Project at Berkeley, he has been able to draw on thousands of letters and notebook entries, many only recently discovered.

"Unlike Twain, whose prose Powers characterizes as "wild and woolly", the biographer is lucid and direct while maintaining a steady hand on the tiller of Twain's life as it courses a twisty path as wide and treacherous as the Mississippi itself. Powers, a wise, if loquacious captain, takes us on a wonderful journey from beginning to end." ( Publishers Weekly)

What listeners say about Mark Twain

I held off listening to this for a long time because it's abridged. I prefer unabridged when it's available, and I particularly wish this title was unabridged. (I took one star off the "Story" rating for this.) But it's a good abridgement: there's still plenty of detail and plenty of terrific yarns (and generous quotations from Twain's own letters and writings), and there are no jarring or incoherent gaps in the narrative.

There's lots of material here about Twain's boyhood, his mining expeditions out West, his trips to Europe, his crush on Laura Wright, his marriage, his kids, and his books: a good discussion, both biographical and critical, of most of the travel books, of Tom Sawyer and Huckleberry Finn, of the later political essays. And there are some wonderful turns on the banjo to mark transitions.

I do wish the producers had allowed more time for Powers to discuss A Connecticut Yankee in King Arthur's Court, which gets a full discussion in the unabridged text, but here gets only a couple of sentences. The period from 1888-1898 is, in general, the period that gets the shortest shrift in this abridgement.

As all biographies of Twain are bound to do, the work becomes sadder and darker as Twain passes into old age. He outlived his wife, two of his daughters, his brothers, and many of his friends. When the end came, he was more than ready to go. Powers' description of this period in his life is poignant and moving. (For a partial antidote to the gloom here, I recommend Michael Shelden's Mark Twain: Man in White, narrated by Andrew Garman.)

Ron Powers is an excellent reader of his own work. Without batting an eye he slips from his own voice into Twain's drawl, and sometimes even from there into spirited exchanges between Twain's characters. I'm quite surprised at the comments on his narration in other reviews. For my part, once I made the decision to listen to it, I couldn't stop.

I am a huge Mark Twain fan. I was eagerly anticipating reading this biography. As I listened, I didn't become engrossed, but I became completely bored. Actually reading the book instead of listening to this narrative might have produced better results. Very disappointing.

I have read much both by and about Mark Twain and this would be a very good addition had the author not tried to do his subject's voice. Toward the end, the listening became very difficult.

I've listened to the abridged version and read the original book. Both are good. Neither is perfect. The original could be the most thorough, complete Twain biography. Read it if you really want to dig into his whole life. But, it could have used an editor, because the information wasn't laid out as smoothly and selectively as one would hope. Powers slavishly recorded details that didn't seem to add anything, and he brought in a baffling parade of people that only appear once or twice. However, when it was abridged for audio the editor kept most of Twain's coming-of-age story and writing, as well as most of the really colorful adventures that shaped his legend. But, it gutted his marriage and family life. The connecting passages - We skip ahead in our story several years. Twain is now married and has a daughter - made clear that real meat had been cut as well as the fat (and it had been.) I wish there was a happy median which sliced out all the dry sentences and kept the full personal story intact.

Twain fans will love this concise biography filled with plenty of details of this amazing writer.

Who really knows anyone?

You can never really know anyone completely and it's probably hardest to know someone in the public eye.
Over the years many people have tried to capture the life of Mark Twain with varying levels of success. Some tried to protect his image, some wanted to emphasize this or that aspect for their own reasons.
Ron Powers seems to want us to know him fully and as much as you can in writing and so many years after his passing. I really enjoyed the attempt at balance. The generally chronological approach was easy to follow. I liked that Mr. Powers included the sweet and almost always funny with the unfortunately, too often bitter.
The end result for me was a desire to revisit Mr. Twain's works and find those books I haven't read especially his political and religious essays and stories.
Mr. Power's reading was great. I loved how he imitated what Mr. Twain might have sounded like when recounting what Twain wrote.
I recommend this highly.