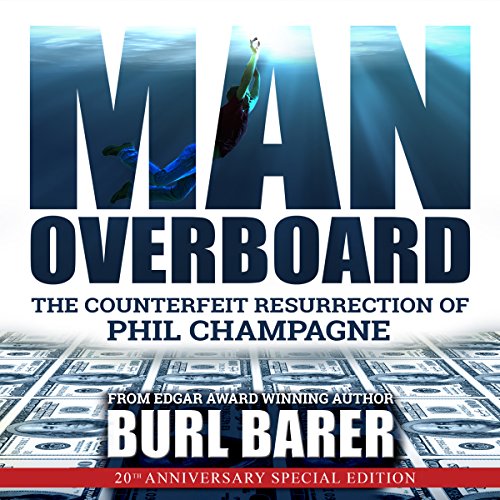 By: Burl Barer
Narrated by: Kevin Pierce
Try for £0.00

1982: Oregon businessman Phil Champagne, age 52, dies in a tragic boating accident off Lopez Island. He is survived by one ex-wife, four adult children, an octogenarian mother, and two despondent brothers. Phil didn't know he was dead until he read it in the paper. All things considered, he took it rather well. So did Phil's brother, Mitch, the beneficiary of a 1.5 million dollar policy on Phil's life.

1992: Washington restaurateur Harold Stegeman, famous for his thick, juicy steaks, is arrested by the Secret Service for printing counterfeit US currency in an Idaho shed. In addition to the bogus bills, Stegeman also has a fraudulently obtained passport, a fabricated Cayman Island driver's license, and Phil Champagne's fingerprints.

When the uproarious reality of Harold Stegeman's secret identity hit the headlines, the counterfeit resurrection of Phil Champagne became one of the most celebrated and hysterically funny true-crime stories of the 20th century. And while every supermarket tabloid and television talk show hounded after the untold story, only Edgar Award winner Burl Barer captured Champagne's confidence and received permission to detail Phil's post-mortem career of fraud, deception, trickery, lies, and fine prime rib, bringing to life the exploits of a man his family thought dead over a decade ago.

"Crisp as a freshly printed C-note. Exceptionally clever and vastly entertaining!" (Lee Goldberg, author, screenwriter, and television producer)
"Barer does it again! A deft and dazzling display of solid research and rapier wit - a must for all true crime aficionados." (Gary C. King, author of To Die For)

What listeners say about Man Overboard

I absolutely loved this story its a very enjoyable with excellent narrative,I highly recommend that you do

I absolutely loved this book. I first heard its synopsis on Dan Zupansky's podcast True Murder. Burl Barer was his guest and could not stop giggling about the mishaps and bad fortune that faced Phil Champagne, a very enjoyable book with excellent narrative, highly recommend

what can I say

I am one of the illiterate fans of burl barer. I read this book years ago and wrote a awesome review on Amazon I purchased a audio version because I think burl needs the money

Although this story is, essentially, about one man, it is one of the most complicated tales I’ve ever read. For one thing, his name keeps changing, as does his location and his nefarious activities. By the time he is arrested for counterfeiting, he has been a smuggler, an unwilling drug runner, and a gigolo.

I found this book nearly as confusing as the subject, because the author switched, without warning, between time periods, identities and incidents. Perhaps there were spacing cues in the print edition, but there weren’t any cues in the audio edition, so I kept having to backtrack to figure out who and what was being discussed, and when the incidents occurred.

I would have preferred a longer, more meticulously organized and constructed book, but, when all is said and done, the subject was so astounding that I rather enjoyed the experience of reading about it.

The narration was, as always when performed by Mr. Pierce, immaculate in every respect. He is absolutely perfect for this sort of book, so good, in fact, that he is one of the few narrators whose presence can lure me into reading a book, even if I am not fairly certain that it will be of interest to me.

I received this book in exchange for this unbiased review via the courtesy of AudioBookBlast dot com. 3 out of 5 stars.

Would you try another book from Burl Barer and/or Kevin Pierce?

Would you recommend Man Overboard to your friends? Why or why not?

Maybe, as it was interesting to see how someone builds a new life and botches it.

Listening is like watching a movie. Each Character comes more alive than when you just read it.

Could you see Man Overboard being made into a movie or a TV series? Who should the stars be?

The true story of a man who fakes his own death. It is almost impossible to believe how complex the life he weaves.
Totally gripping I couldn't put it down.
I received a free copy of this audio book at my request and voluntarily leave this honest review..

Great story, excellent writing and the best narrator on Audible. I wish the book had been longer!

Interesting story, although the jumps in time can be confusing. Nevertheless a good story, and Kevin Pierce's narration is very fitting.

A very great adventure .Easy and entertaining read ,doubt that it is all real ,but nevertheless a fantastic story.