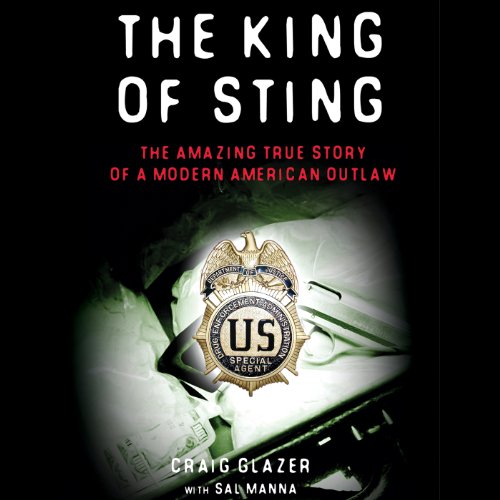 The King of Sting

The King of Sting

After college student Craig Glazer was ripped off while trying to buy marijuana, he decided to plan and execute a fake sting to get back at the drug dealers who had robbed him. He walked away with $50,000 and, more importantly, a rush so intense that he embarked on a two-year spree of stings, aided by a crew of accomplices. Robin Bloodworth's confident, rough-around-the-edges voice believably conveys Glazer's addiction to the adrenaline rush of the outlaw lifestyle in this amazing true story. Scenes of violence and suspense unfurl through Bloodworth's intense peformance, and listeners will be on the edge of their seats as Glazer attempts the ultimate sting in Los Angeles, consequences be damned.

Craig Glazer was an ordinary college student when he planned and successfully executed his first fake sting to get back at some drug dealers who had robbed him. The rush he got from the experience led him and a crew of 11 accomplices to mastermind a two-year, 33-sting spree that stretched coast to coast, posing as everything from local police to IRS agents and hotel managers.

Glazer and Donald Woodbeck, his partner in crime, sniffed out some of the most sought-after drug lords in the country for the FBI and DEA like bloodhounds. For a while, the plan worked—until Craig’s world came crashing down.

“A high-flying, adrenaline-filled story with the feel of the movie The Sting.” ( Booklist)

The book I wished was better

The story is surprisingly boring and the narration is slow and smug. The books goes off on many tangents that slow down what little action there is. I couldn't get through it.

One of my Favorites

Yes. For anyone that likes true crime and is intrigued by clever "bad guys", this is a great read.

What was one of the most memorable moments of The King of Sting?

The great thing about this book is that there was no ebb an flow leading to that peak. The whole book was a flow and it was all very memorable.

His voice an inflection was wonderful and he made the characters come alive. The were subtle differences to their voices and tones, without sounding overdone, which carried throughout the book. One of my favorite listens.

I think there were sad moments, but for the most part, this was about clever and even witty criminals ripping off other criminals.

I agreed with the reviewer above. To slow to get to the point of a story.