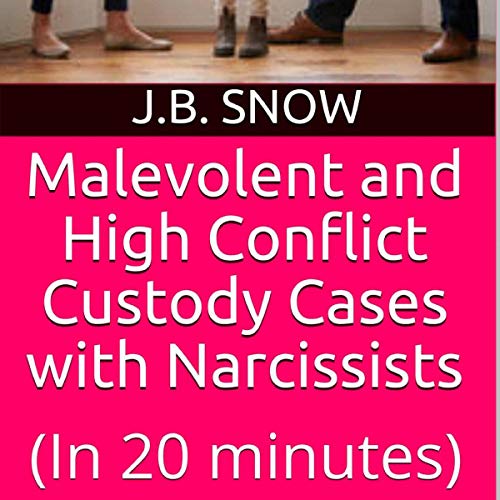 If the thought of entering into a high-conflict custody case terrifies you, you are not alone. Most partners who are in a relationship with a narcissist are too terrified to leave them for fear of losing custody of their children. Sadly, even when the narcissist is toxic and immoral, he stands a better chance of winning custody than the overwrought, emotionally terrorized victim that he had been abusing and controlling long before the relationship fell apart.

In 20 minutes, we will give you examples of high-conflict custody cases with narcissists who used sneaky and diabolical court tactics to win custody from a fit partner. If you walk into the court without having some knowledge of past cases and the narcissist’s tactics listed in audiobook one of this Divorce Court series, you will most likely be fighting a losing battle. Arm yourself with knowledge and power to gain a tactical advantage on the narcissist in court, and don’t become more of a victim to him than you already are.

Most narcissists won’t lift a finger while they are in a relationship to help with the child-rearing. However, don’t think this will stop the narcissist from filing for custody. The narcissist values money, status, popularity, power, and resources above all else. He doesn’t value family. He doesn’t want to pay you child support, plain and simple. This drive not to pay you a dime will make him do extraneous things that you never even thought were possible in the court game. Your head will be spinning at the levels he will stoop to in order to win and make you look like a grade-A loser.

Never be upset with your children for siding with the abuser. A child who sees their abused parent as weak and victimized will naturally want the victimized parent to do whatever they must to keep the peace.

There are some good books about going through custody with a narcissist, this is the worst I have read. There are no real strategies offered, but, there is a sense of doom and gloom of how your life will probably go. It seems written by someone hurt, vs professional. The takeaway, your life will suck, this is why and don’t think the courts will help. Not a helpful book.