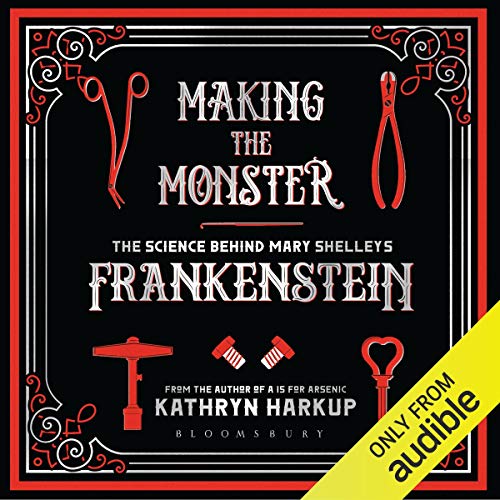 By: Kathryn Harkup
Narrated by: Ric Jerrom
Try for £0.00

The year 1818 saw the publication of one of the most influential science fiction stories of all time. Frankenstein: Or, Modern Prometheus by Mary Shelley had a huge impact on Gothic horror and science fiction genres. The name Frankenstein has become part of our everyday language, often used in derogatory terms to describe scientists who have overstepped a perceived moral line. But how did a 19-year-old woman with no formal education come up with the idea for an extraordinary novel such as Frankenstein?

The period 1790-1820 saw huge advances in our understanding of electricity and physiology. Sensational science demonstrations caught the imagination of the general public, and newspapers were full of tales of murder and resurrectionists. It is unlikely that Frankenstein would have been successful in his attempts to create life back in 1818. However, advances in medical science mean we have overcome many of the stumbling blocks that would have thwarted his ambition. We can resuscitate people using defibrillators, we can save lives using blood transfusions and we can prolong life through organ transplants - these procedures are nowadays considered almost routine. Many of these modern achievements are a direct result of 19th-century scientists conducting their gruesome experiments on the dead.

Making the Monster explores the science behind Shelley's book. From tales of reanimated zombie kittens to electrical experiments on human cadavers, Kathryn Harkup examines the science and scientists that influenced Mary Shelley and inspired her most famous creation, Victor Frankenstein.

While thankfully we are still far from being able to recreate Victor's 'creature', scientists have tried to create the building blocks of life, and the dream of creating life forms from scratch is now tantalisingly close.

What listeners say about Making the Monster

This presents a combination of a basic biography of Mary Shelley, and a simple explanation of the scientific and historical backdrop that led to Frankenstein. Accessibly written and charmingly read. Makes me want to pick up the actual book and take my time with it.

The Best Bio-book I've Heard in a long While

A lovely and well researched explanation and exploration of Mary Shelley's Life Story and a much needed deeper scientific, artistic, personal and political context of Frankenstein's much deeper meanings and ontology of the story.