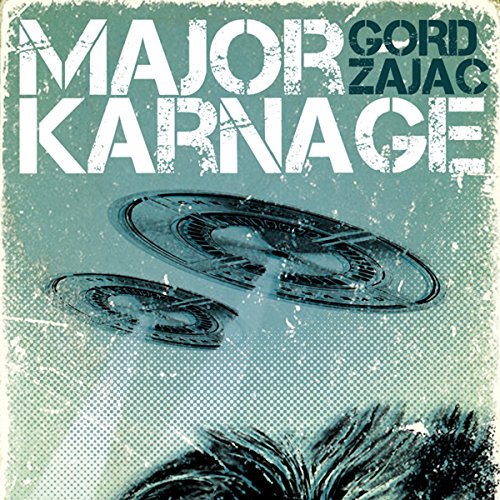 By: Gord Zajac
Narrated by: Fleet Cooper
Try for £0.00

DON'T TALK TO HIM ABOUT THE WAR!!!

It has been 20 years since The War, and Major John Karnage has finally settled into retirement: locked up in an insane asylum, with an explosive device embedded in the back of his neck to curb his violent tendencies. Karnage and his troopers have been deemed unfit to live in normal society. Like a bit of old chewing gum stuck under a coffee table, the world has left The War and its scarred, unstable veterans behind.

The military has been disbanded and World Peace has descended upon the Earth. Its inhabitants live happy, profitable lives under the global rule of the benevolent Dabney Corporation. All is tea and roses in this new, sanitized world.... until a terrifying threat from beyond the stars rears its squiggly head! An invading armada of aliens threatens to destroy the Earth, and it's up to Major Karnage to stop them - as long as he doesn't accidentally blow his own head off first.

What listeners say about Major Karnage

Major Karnage begins with a great concept. We start 20 years after some blowout conflagration of a world war that actually was the war to end all wars. We find our hero, a war veteran named Major Karnage, remanded to a lunatic asylum being treated (along with his loyal band of followers) for violent behaviors. In what appears to be a psychotic episode, the major believes aliens are about to invade. What follows is a bizarre tale of alien invasion against a backdrop of a world run by a laughable cat-centered corporation, worm worshiping fanatics, a self induced megamind, a literal corporate "head", and cloned freelance chauffeur bodyguards that repeat each other sentences.

The pacing is terrible with long stretches of infodumps throughout the sorry, even close to the end. In general, these long, boring recitations add little to the plot, other than to build up to other action scenes which are mostly disjointed. The dialogue is stilted, repetitive, and drawn out. Most of the plot twists are too predictable. The story is not so much formulaic as it is simply obvious. The ending just stops (after the alien is defeated) without any resolution for the bulk of the characters.

The narration is well done with a good range of characters, although Karnage is played a bit too gruff for my taste.

If you could sum up Major Karnage in three words, what would they be?

Fun, fun , fun. Don't let the first 20 minutes put you off. It all starts to make sense.

Pretty much a goofball story. But I’ve listened to it twice.

First off, I rarely review a book. And usually it is because they were terrible. This book isn’t terrible. It is just weird.
Only 4 for narration because he was stuck with a weird book to read. His different voices were very distinctive. And it didn’t sound like he was reading the lines for the first time (there are narrators out there that it does sound that way).
Now the story: WTF? 20 years since the WAR ended and the world had changed THAT MUCH?? Even with alien influence 1 corporation couldn’t do so much stupidity in 20 years. Maybe 120 or 250 so multi-generational gap could cover it. And ‘Chick-a-Boom’??? WTF??? Thus I call it a goofball of a story. I get that a title of Major Karnage is going to produce some major stereotyping, complete with the perfect voice for him (can’t help but think that Fleet Cooper’s throat is sore).
And in a year or 3 I will listen to this book again. It is original in its goofball story line.