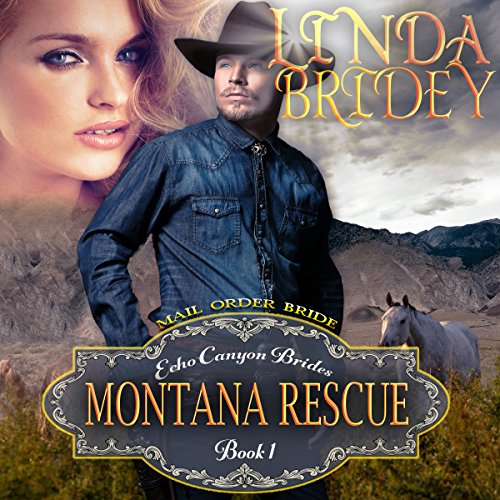 Josie Bainbridge has watched all of her friends get married and despairs of ever finding a husband - especially because her home city of Pullman, Washington has too many women and not enough men. It becomes clear that if she's ever going to find a man of her own, she's going to have to look elsewhere. Josie begins scouring the personal advertisements, hoping to find the man of her dreams. When she comes across one written by a Montana sheriff, she thinks she just might have found him.

In 1890, Echo Canyon, Montana is on the verge of extinction. The gold rush has moved elsewhere along with many of its citizens, including most of the available women. Those who are left are diehards who refuse to leave their hometown. Faced with an uncertain future, a few loyal townspeople create an unusual plan to turn things around in Echo and keep it on the map.

It seems simple: if they can increase their population, it will keep their businesses alive and Echo will survive. They decide that mail-order brides are the best way to make their plan a success. But who will be the first gentleman to order a bride? After a shocking incident in Echo, Sheriff Evan Taft reluctantly decides to step up and give it a whirl. If he can secure a bride, maybe other men will follow him in finding their own wives.

Evan embarks on finding the perfect wife, but can it be done? Evan has been burned in the past and he doesn't want to repeat the experience. Even more than he wants to keep from losing Echo, he doesn't want to lose his heart only for it to be crushed again. Strife and evil forces accompany his search for true love. Will he succeed? The fate of Echo could very well depend on it.

Another really good, clean, fun, entertaining and very enjoyable story. Great start to another Mail Order Bride series by Linda Bridey. Her stories are just fun and easy to listen to. As always the story is filled with likable characters and has a good storyline. She always has that one character who almost steals the whole story. The same goes for this book. She knows how to pull you into a story and keep you there.

Little bit of romance, suspense, mystery and a HEA.

Narration the good and the bad. Eric Burr does a good job for the most. Overall I enjoyed his narration , although he has a few areas he needs to work on. Nice voice. Of coarse most of the male character voices were good. The non character narrative was great as well. Clearly spoken with a nice even pace. Except for his accent on one of his characters. The accent seemed to be inconsistent. Was suppose to be Irish but sounded Jamaican at times. His female character voices need a little work. To high pitched. Having dual narration would have been really nice.

I enjoyed listening to this story. I liked that it was clean and sweet. There was a good array of characters with stories that intertwined well. I will definitely be listening to more books in this series. I thought the plot moved along at a good steady pace. It was easy to follow all the characters. I felt they were believable. I liked most of the characters with the exception of a couple. There was a good balance between the drama and romance aspects of the story. I liked the narrator as well. He did a good job at reading and at giving each character a voice. I would highly recommend both the author and narrator to others.

Where does Mail Order Bride: Montana Rescue rank among all the audiobooks you’ve listened to so far?

It ranks near the top of the mail order bride books i have listened to.

What was one of the most memorable moments of Mail Order Bride: Montana Rescue?

My favorite scene was when it was dinner time and the Aunt's rules for the men... lol

I am not sure, but it would make for an interesting movie

This story was a delight from beginning to end with each character portraying very different personalities and traits which endeared me to them all except for the villains (the kind you just love to hate) whom I could happily have done away with myself. This seems to be a good starting point for a series.
We have Sheriff Evan Taft who is talked into advertising for a Mail Order Bride and Josie answers his advert. They meet and fall in love (of course) and the story tells of the ups and downs in this relationships.
There were two other characters that I would like to mention as they played a lively and very amusing part of this story. The first is Evan's elderly aunt who brought him up. She is something else and every time she appeared and opened her mouth I knew there was a good chuckle around the corner.
The other is Lucky, an Irishman who befriended Josie on her train trip out to meet Evan. He reminded me of a fully grown Leprechaun, full of mischief and strange and wonderful thoughts that he wasn't shy to share.
Altogether, this story was beautifully written and I enjoyed it thoroughly.
The narration by Eric Burr was on the whole good. I just wasn't 100% happy with his rendition of an Irish accent. I kept picking up Scottish, Italian and Jewish accents to name a few and the occasional tiny bit of Irish accent. Perhaps he could get some coaching in this before he attempts this accent again.
I would recommend this audiobook and story as a really good listen/read.
I was provided this audiobook at no charge by the author in exchange for an unbiased review.

This story is fine for people who want sweet, clean somewhat far fetched fairy tales. The emotional responses to some of the events in this story are just not quite believable (i.e. the train wreck scene) and every conflict or misunderstanding is easily and tidily cleaned up. Meh.

It could have been mildly entertaining if a different narrator had been chosen. Eric Burr read the thing like he was reading a children's bedtime story to a feeble-minded idiot. He provided no emoting, or what he did offer was simply wrong for the scene. He lacks any talent for pacing or timing. His characters sounded ludicrous, making the villains so weak that it was just idiotic to think that anyone would be intimidated by or afraid of them.

Overall, I'd say don't waste your money, credit or time with this one.

Josie’s innocence, talents, and unexpected moxie makes her the perfect match for Sheriff Evan, lawman of a withering Montana town. And, if any two people can, along with their most unusual assortment of ragtag friends and relatives, their town of Echo will revive. In the meantime, enjoy the entertainment of Josie and Evan’s Mail Order Marriage. Definitely recommended!

Great story with just enough twists and turns, heartbreaking revelations and resiliency. Despite all of this love blooms between a the main characters. Can't wait to read/listen to the rest of these series.

I loved this story so much!

Wow, Mrs. Bridey is a new to me author, but I can't tell you how much I loved this story, and hope to read and listen to more of her stories!

I've read a couple of these but not in order. I've enjoyed them. They are a quick easy read, holding your attention throughout the book. Josie answers the ad from Evan a Montana Sheriff who is looking for a wife.

The book is well written. It's a good western historical romance. It has great cast of characters that make you want to continue to be a part of their lives.

I received a free copy of this book for an honest review. While I probably wouldn't have bought the book, I did enjoy it and have read others as well.