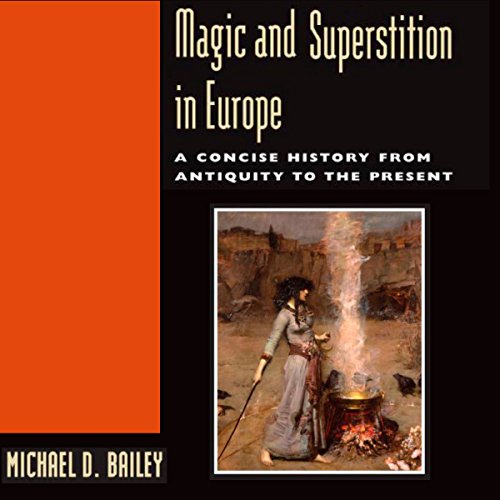 Magic and Superstition in Europe

The only comprehensive, single-volume survey of magic available, this compelling book traces the history of magic, witchcraft, and superstitious practices such as popular spells or charms from antiquity to the present day.

Focusing especially on Europe in the medieval and early modern eras, Michael Bailey also explores the ancient Near East, classical Greece and Rome, and the spread of magical systems, particularly modern witchcraft or Wicca, from Europe to the United States. He examines how magic and superstition have been defined in various historical eras and how these constructions have changed over time. He considers the ways in which specific categories of magic have been condemned, and how those identified as magicians or witches have been persecuted and prosecuted in various societies.

Although conceptions of magic have changed over time, the author shows how magic has almost always served as a boundary marker separating socially acceptable actions from illicit ones, and more generally the known and understood from the unknown and occult.

"A sweeping, broadly accessible account of magic, religion, and 'superstition' over the past two thousand years. This book deserves to be widely read." (H. C. Erik Midelfort, University of Virginia)
"Bailey's style of writing is captivating and the results of his archival research are impressive." (Svitlana P. Kukharenko, University of Alberta)
"An ambitious survey of the history of magic from the ancient world to the modern West… shows admirable command and understanding of a wide range of material." ( The Catholic Historical Review)

What listeners say about Magic and Superstition in Europe

The explanation in concise but complete. Very informative and not "spiritual" as discourses about magic can get from time to time. Very relevant for those interested in the history of science.

moments of patriarchal superiority and derision for feminist theory, including a brief discussion of the feminazi (not joking) but all in all a decent synopsis of historical ideologies. a good reference guide to fund other reading material