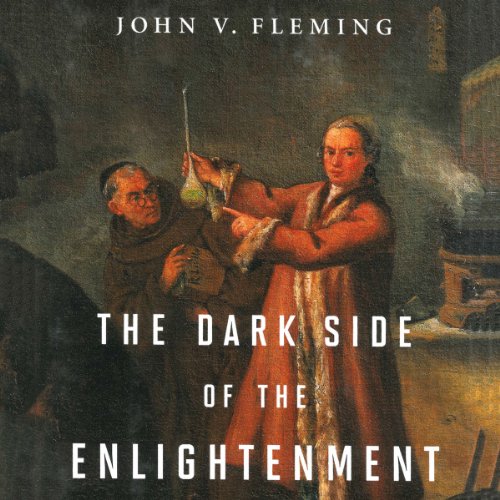 The Dark Side of the Enlightenment

Wizards, Alchemists, and Spiritual Seekers in the Age of Reason
By: John V. Fleming
Narrated by: Kevin Pariseau
Length: 16 hrs and 20 mins
Categories: History, World
4.5 out of 5 stars 4.7 (3 ratings)

The Dark Side of the Enlightenment

Why spiritual and supernatural yearnings, even investigations into the occult, flourished in the era of rationalist philosophy.

In The Dark Side of the Enlightenment, John V. Fleming shows how the impulses of the European Enlightenment - generally associated with great strides in the liberation of human thought from superstition and traditional religion - were challenged by tenacious religious ideas or channeled into the "darker" pursuits of the esoteric and the occult. His engaging topics include the stubborn survival of the miraculous, the Enlightenment roles of Rosicrucianism and Freemasonry, and the widespread pursuit of magic and alchemy.

Though we tend not to associate what was once called alchemy with what we now call chemistry, Fleming shows that the difference is merely one of linguistic modernization. Alchemy was once the chemistry, of Arabic derivation, and its practitioners were among the principal scientists and physicians of their ages. No point is more important for understanding the strange and fascinating figures in this book than the prestige of alchemy among the learned men of the age.

Fleming follows some of these complexities and contradictions of the "Age of Lights" into the biographies of two of its extraordinary offspring. The first is the controversial wizard known as Count Cagliostro, the "Egyptian" freemason, unconventional healer, and alchemist known most infamously for his ambiguous association with the Affair of the Diamond Necklace, which history has viewed as among the possible harbingers of the French Revolution and a major contributing factor in the growing unpopularity of Marie Antoinette. Fleming also reviews the career of Julie de Krüdener, the sentimental novelist, Pietist preacher, and political mystic who would later become notorious as a prophet.

Impressively researched and wonderfully erudite, this rich narrative history sheds light on some lesser-known mental extravagances and beliefs of the Enlightenment era and brings to life some of the most extraordinary characters ever encountered either in history or fiction.

While the subject matter of this book is fascinating, it could have hardly fallen into the hands of a less capable author.

The book opens with an hour-long tirade on how the dark ages weren't so very dark. Which, whether or not you believe it, has nothing to do with the topic of the book. And neither does the majority of the rambling, fruitless narrative that follows.

In sum, this book grows around anecdotes following the lives of various faith healers, magicians, and such. The author urges us time and again to consider that these men were not con artists, but have been misunderstood by history, despite evidence to the contrary laying thick about the narrative.

The worst of the book is in the author's complete failure to consider what his audience already knows, and what is new information that needs explaining. He consistently refers to terms and events without explaining what they mean, or explaining far too late. In one chapter, he centers his narrative around how hated the "French Convulsionists" were, without ever quite getting around to explaining what a Convulsionist was. The closest he gets is in describing the "first of the Convulsionists", but then he promptly tells us that she was unlike those who followed. What they did, or why they were so hated, is never mentioned.