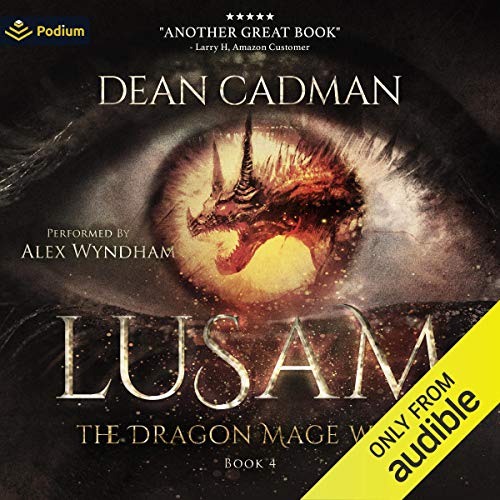 By: Dean Cadman
Narrated by: Alex Wyndham
Try for £0.00

Ever since discovering that his mother is still alive, and being held captive by Lord Zelroth, Lusam has been tormented by terrifying nightmares. He soon finds that it's not only his nightmares which threaten to thwart his plans of a rescue, but also the King himself. New alliances are made and old ones are tested to their limits as Lusam's single-mindedness to rescue his mother causes him to take risks that he would never normally consider.

A recent discovery allows Lord Zelroth to set in motion a new plan, which, if successful, will once again tear open the Great Rift and release the hordes of Netherworld creatures into the world, as well as the imprisoned God, Aamon. The very survival of Afaraon, and, possibly, the entire world, may soon hinge on the decisions that Lusam makes.

What listeners say about Lusam

Would highly recommend this series to anyone, eagerly awaiting the next chapter in this well crafted tale

Another great book. Story is captivating and can't wait to start the next book. Narrator continues to be perfect

narration is top notch and the characters memorable. Once it gets its claws into you...well there in.

Great book in the series.

Excellent continuation of the series and very well performed, looking forward to the next book.

I am enjoying listening to this series. The narration is good with Alex Wyndham reading the book on your behalf as opposed to trying to monopolise the storyline, as some narrators do. My only problem with this series is that each book has no particular "ending". Minor plots are resolved but only so the characters can be positioned, like in a game of chess, for their role in the next book.

Next book please could not put any of these down until finished,brilliant,book ,brilliantly told ,As is all books so far. Not to be missed

Great Story in Dire Need of an Editor

I'm hooked on this story; it's really engrossing, but the prose has some serious flaws. I find myself wanting to shout at the author at least every five minutes. Terrible repetitive word and phrase choices collide with constant, superfluous, and redundant individual clarifications. The same 6 adjectives and descriptors used over and over. The same overused superlatives on every page.

There's about 20 pages with of words that could just be cut without any need for replacement. Just unnecessary, additional words that would not be missed if they had just been deleted from the manuscript.

Dean Cadman, I love this series and I will happily beta-read your work for free because you tell a really good tale. If you don't take me up on my offer, please find a good editor. I want to keep going with this series, but it's getting harder and harder to stay in the story.

This book started really slow! The first few chapters, dealing with his headache, and subsequent cure, was far too drawn out. While it added a dimension to the story, a couple of pages would have sufficed!

Additionally, the author had Lusam lamenting, and whining, etc., instead of taking charge and taking action. The first books were much better.

Then the ending was also anticlimactic, in my opinion.

Ok I can not wait for the next installment! I love the progression of magic and skills! This book series has not disappointed at all and I can't wait to read more, well listen I guess! Lol please pick it up you'll thank me later.

Loved the book. Character voices were good by the narrator. Some repetition is there when concepts that were already explained comes up. Otherwise no issues with this book.

found my self baffled and frustrated as to why lusam was such a reactionary pushover all the sudden after being more and more headstrong in the previous story. Why the hell did lusam care what the king wanted? hes the most powerful person on the planet apparently! why not just go back to the wall and ask the dragon about dragons...? a lot of wasted time and dragging plot.

wasn't able to put it down

I struggled to finish this book until about half way through. It seems the author got bogged down by his publisher and expanded the story line with whining and doubt. I hope the last book is better.

I got hooked on the story with the first books, but I cannot stand how often the writer uses &quot;chuckled,&quot; and &quot;chuckling.&quot; It's so overused that it becomes distracting and drives my rage to record levels. Maybe I have anger issues

I’m done so drawn out and the times tedious

The author draws out every sequence and I feel like we are pulling hairs individually.

The Author makes the MC a pathetic idiot at convenient points in the story.
The drama adds some flair for people who like that kind of thing. The Story by itself is just good enough to keep me going because I want to see it end, but as strong as The Main character is supposed to be(Strongest mage in the world) you can hardly tell.