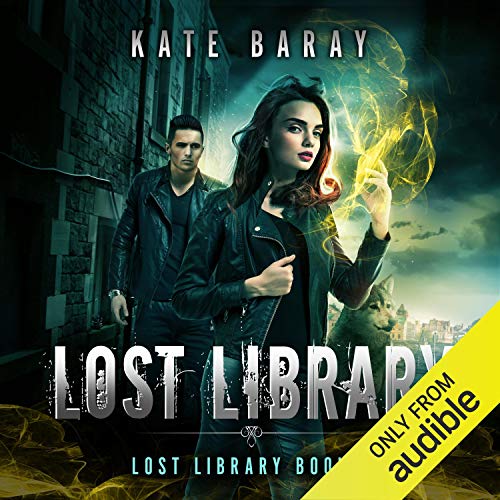 Lost Library brings together a mysterious, magical book and a quirky heroine to create the adventure of a lifetime!

John Braxton arrives unannounced on Lizzie Smith's doorstep looking for answers she doesn't have. She may have a magical book, but she hasn't a clue what to do with it - or even how to read it. And John's revelation that he's a Lycan isn't making the job any easier.

Before the code to the book can be cracked, Lizzie and John stumble into the middle of a power-hungry mastermind's plan. Caught up in one man's search for power, Lizzie soon begins to uncover surprising secrets about her past and powers. Can she and John put a stop to their new-found enemy's plans?

Take a romp through the life of the quirky and well-meaning Lizzie as she discovers magic, creatures that go bump in the night, and maybe love.

What listeners say about Lost Library

This book is supposed to be about a 34 year old woman but reads as though she is a teenager. I am not sure if it is the voice of the 'reader' but I was continuously flummoxed when the story reminded me that the main character was a grown woman. I thought maybe the author was young but discovered this was not the case. Maybe an older 'reader' would solve this. The story is quite slow but easy 'reading' and the length being quite short means that it can be listened to in one 'sitting'. Although the cliffhanger makes me want to listen to the next 'book' I am annoyed to find books 2 and 3 are not available on audible. I would have waited to find out if these are to be recorded.if I had known.

It is so sad and frustrating when one is presented with a good story but an unsuitable narrator. the narrator sounded like a 17 year old girl who was to be in her late 30's plus the author often describes the hero's voice as low and or deep.... the narrator never changed her voice to reflect the author's discriptions. producers of audio books need to be more professional when giving narration parts to persons who's voices do not even come close to the discriptions of age or genda of characters. narrator ruined the book for me.

I love reading this series and the audio version doesn't disappoint either. This story has mystery, romance, magic , Lycans, plucky women and hot sexy guys...what's not to like!This is the beginning of the series that still has a satisfying ending and yet leaves you wanting to know more about all the characters.Lizzie is a great heroine, not perfect, but real and so endearing and funny. John is drool worthy and trying hard to be honest with her without scaring her and letting her know how much he wants her for himself. And the other characters are just a great mix of humor, sexy ness, loyalty and friendship.The Lost Library was a good read and is an enjoyable audio book. Kelly does a great job as narrator and both sounds like and has the attitude I thought Lizzie would have.IThis is a different look at Lycans...not wrewolfs...... and magic...and one I thoroughly enjoyed.I did receive a copy of this book for an Honest review.

Fun but far from perfect

There's a lot to like about this book. Lizzie Smith and John Braxton are likable, interesting characters. The Lycan don't act out a stereotypical and scientifically disproven version of wolf dominance. The story is exciting, and keeps moving. The way magic works is interesting, and even the bad guys are somewhat interesting. But. You knew there was a "but" coming, right? When Lycan John Braxton starts hanging around Lizzie's home (for good and sufficient reason), naturally the local dogs go nuts over the presence of the wolf. This includes Lizzie's two dogs. Lizzie sees the wolf the first night, and mistakes him for the neighbor's dog, Spencer, a big, friendly, affectionate malamute. Notice how much we know about the neighbor's dog. We know his name, his breed, his personality. Guess what we know about Lizzie's dogs. Not just at this point in the book, but by the end of it, we still know only that they are dogs, and there are two of them. No names, no breeds, not even any dog type, and no clue where they came from or why she has them, something most dog owners can tell you at length and in as much detail as you seem up for tolerating. Lizzie never talks about her dogs. She is concerned that someone gets them fed and walked at a point where she, without spoilers, genuinely can't herself. She tells us she's happy to be back with them when that happens. But it's very superficial, and none of it feels real. My initial impression was that Baray must not be a dog owner, but apparently she is. She has pointers and bloodhounds. That makes this even weirder. Why does the otherwise likable Lizzie have dogs she doesn't even bother to name? Seriously. Maybe the pointers and bloodhounds are a Clue. Maybe she decided that Lizzie's dogs must be small dogs, and that, as it does for many Big Hunting Dog people, makes them "not real dogs" for her. And maybe not. But that's a huge lapse, for a dog-owning writer to make her protagonist's dogs anonymous, faceless, personality-free props. There's a lot I liked about this book. But the dogs being there apparently solely for Lizzie to be really, really annoyed that they bark at, first the wolf outside, and then the guy that she initially doesn't trust at all, is weird and distracting and annoying, and really kicked me out of the book every time they were referred to in passing (they never got more mention than that.) I liked it. I did, honestly, when I was allowed to forget the cypher-dogs. But some serious eye-rolling happened. Important note: No dogs die in the telling of this story. I bought this audiobook.

I am currently on Chapter 14 and I'm bored. The main character sounds and acts like a teenager, not like an almost 40 year old woman. Her best friend Kenna sounds the same. I'll finish but it might take awhile. I think I need a break for now . I'll update when I finish.

The narrator is a turnoff

The story is pretty good but the narrator is a whiner and detracts from the story. Try again with a male primary character and a female wolf friend using a male narrator. NO, I am not a misogynist, but the whiny voice of the narrator is a turn off.

A regular love story about a fantasy and werewolf . It was also much more about human and werewolf interaction

it kept me interested the whole time. the characters and plot were fun and relatable! I also loved the narration. It was so nice that she didnt change inflections on the characters . It always sounds so awful when narrators do that.

Too 'cutesy' for me. Couldn't finish.

I live near Austin, where the story is set but that wasn't enough to keep me interested for long.

A surprisingly enjoyable journey. I find myself mirrored with the main character. She to nice, almost to the point of doormat. As soon as I figure out the story, it takes an unexpected turn. C+

I am thoroughly intrigued with the mystery of these books, and I'm enjoying the relationships I think are starting. Lots of action and romantic tension for those who, like me, are entertained by them. Enjoy!