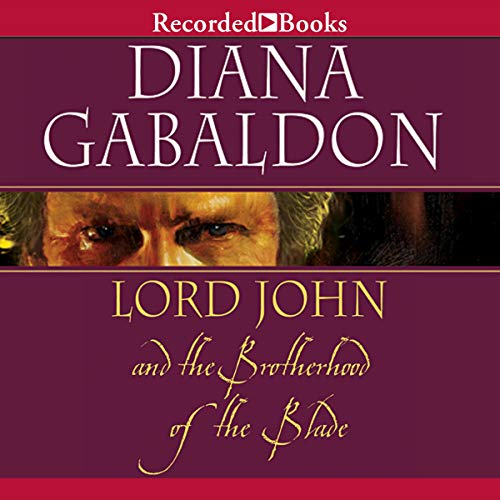 Lord John and the Brotherhood of the Blade: International Edition

By: Diana Gabaldon
Narrated by: Jeff Woodman
Try for £0.00

Diana Gabaldon, the number one New York Times best-selling author of the Outlander saga, brings back one of her most compelling characters: Lord John Grey.

Here Gabaldon weaves together the strands of Lord John's secret and public lives - a shattering family mystery, a love affair with potentially disastrous consequences, and a war that stretches from the Old World to the New. It's been 17 years since Lord John's father, the duke of Pardloe, was found dead, a pistol in his hand and accusations of his role as a Jacobite agent staining forever a family's honor. Now unlaid ghosts from the past are stirring.

Lord John's brother has mysteriously received a page of their late father's missing diary - and John is convinced that someone is taunting the Grey family with secrets from the grave. So he turns to the only man he can trust: the Scottish Jacobite James Fraser. But war, a forbidden affair, and Fraser's own secrets will complicate Lord John's quest - until James Fraser yields the missing piece of an astounding puzzle and Lord John must decide whether his family's honor is worth his life.

What listeners say about Lord John and the Brotherhood of the Blade: International Edition

A believable hero with a hidden core...

As a fan of Diana Gabaldon's 'Outlander' series I was ready to enjoy this book and was not disappointed. Lord John is a believable character set in the 1700's and is backed up with lots of historical detail and an engrossing storyline. Am looking forward to the next instalment.

brilliant story with plenty of intrigue and a few glimpses of Jamie Fraser, thanks for another great book

The first half of this book was full of dreadful soppy romanticism that intefered with the plot. Of course this is just my opinion, and I presume Gabaldon generally writes such romances, but I was expecting more mystery and less lovey-dovey!

enjoyable book, hard to put down sometimes. it resolved well and I was very satisfied.

I didn't like this book it wasn't Diana Gabaldon finest writing. It was boring and the narrator voice had no interest in the different characters.

Disappointed - do waste your money.

Having listened to the complete Outlander series and really was captivated and enjoyed it I bought this one thinking it would be as good. I’m not sure if it was the narrator voice (which I found very boring to listen to) or story line. But where as I will no doubt listen to the Outlander series again, this I struggled to complete and def would not recommend.

what do you think British think of words of 200 years ago narrated as American... "Newgit" instead of Newgate and deTALE instead of detail and many more. there have been such excellent work on the accents of this narration with many language forms and intonations but no use of a British pronunciation anthology. online so available as Oxford or Cambridge gives pronunciation samples. for such a good novelist and quality writing it is a tremendous aberration.

this is well plotted and well written, though I skip the sex scenes as too embarrassing.
The reader's fake "English" accent, however, is infuriating. The mispronunciation of "plait" as "plate" rather than "platt" is particularly grating.
I would have given up if the story had been less interesting.

Easy listen - if your missing outlander

I listened to this as I am waiting for the most recent outlander book to come out. This gives you more of an insight into what type of man Lord John is, so when you read outlander you understand his bits of the story more. Characters entwine in this series with the outlander series such as Percy Wainwright and Harold.
The book is an easy listen, as usual, Diana Gabaldon did a lot of research into the era and kept it as historically accurate as possible. You see what life was like for the upper class and the military living during the Seven Year War.
The book is more fast pace than outlander which I enjoyed, she is very good at writing from a male point of view, you sympathise with him and get an insight to our horrible and scary being a gay in his time was.
You do not need to read the outlander books to enjoy this, its a series in its own right.

Another excellent Lord John story, brilliantly performed and narrated. I love the Outlander series of books with Jamie and Claire and the Lord John novellas etc provide more back story for the other characters. Would love to see these also brought to the small screen.

If you want more detail into Voyager (Oulander series) this is Lord John's story during some of those years. The other Lord John books remembers Jamie but does not interact with him. The other LJ books have NOTHING to do with Outlander. Keep in mind this book is about Lord John and his military career and Jamie is a small part of it. It does give a little more insight into their relationship where the others do not.

First of all let me say I am on my fourth listen to this book. Jeff Woodman voices Lord John Grey with tremendous wit and style, he does a fine job with the other characters as well (although Davina Porter fans may find fault with his Jamie Fraser). The story is intriguing on it's own (ahem, yes he's gay, yes there is sex, it doesn't get graphic until 4 or 5 hours into the book with plenty of foreshadowing - those who claim to be shocked at this remind me of Claude Rains in "Casablanca"). Beyond that there is social and political intrigue, great battle scenes and a family mystery.

If you are a Gabaldon fan and plan to read/listen to "Echo in the Bone" this is a must for many reasons. Chacters and story lines come back to haunt us, but most critically this book shows us Lord John Grey in depth. He's no longer a 'minor character' in Echo, and I for one am glad.

Diana Gabaldon gets better and better

I really enjoyed this book. Even having read An Echo In The Bone, I hadn't experienced Lord John as a fully realized character. Here, he is complex, commanding, sexy and sexual, and the narrator is fantastic. My only complaint was with the plot complexities, which left me baffled at the end. I couldn't remember who some characters were, and didn't understand their motivations. I also didn't care about the storyline involving John's father much. I was far more interested in Percy and John. Really liked Jamie's cameos and John's perspective on Hellwater and Geneva, which were far different than Jamie's in the Outlander series. In my opinion, the Outlander series has gotten better and better as the books have continued, with the characters gaining depth and shadows. This Lord John tome adds to the mix. Gabaldon has created a world I love dipping into vicariously!!

The Lord John short stories get woven into the places between the Lord John novels, and tie them together. Both short stories and novels tie the gap in the Outlander novels between Dragonfly in Amber where John first appears, and Claire disappears and Voyager where Claire/Jaime's story continues. This is ~1745 to ~1773.

In that nearly 30 year gap, John has been off on journeys of his own, and it's wonderful how Diana Gabaldon weaves history and research into a story in such detail without detracting from the characters or their situations. While I enjoyed Private Matter very much, Brotherhood is still my favorite, and you see John at his best, and his worst, sometimes funny and always enjoyable. There's a couple of battles, which are always my favorite parts when reading Lord John, and interaction between him and his family, and a mystery.

In this novel John is searching for answers about the death of his father, but the plot is woven with other subplots that converge neatly (or messily) when John has to face a crisis of honor, and finds the clue to both answers in Jamie Fraser.

There are plot pieces and characters here that find their way into other Lord John stories (Haunted Soldier, Custom of the Army) or Outlander (Breath of Snow and Ashes, Firey Cross, Echo in the Bone), but resolve themselves nicely for the time being within this book. I think, however that "Lord John and the Scottish Prisoner" (not yet released as of this review) will be the one to watch, and carry the events of Brotherhood and Custom forward to fill in a large gap in the rocky evolution of John and Jamie's friendship.

Yes, there are a couple of graphic sex scenes - if graphic sex of either hetero or homosexual participants troubles you, I suggest you back quickly away from any book in the Outlander/Lord John universe by Gabaldon.

The narrator, Jeff Woodman, does all the work in this series and does a great job, especially with John, Harry and Tom.

I have always enjoyed the character of Lord John and Diana Gabaldon does not disappoint in this newest, for me, story of him.

I love Lord John. I think he is a wonderful character. I've listened to all the books and wish there were more. It was interesting to hear his perspective on Jamie Frasier but he can definitely carry his own story.

I hurt myself trying to finish this book. The characters are believable. Lord John is a great character. I think she really gave us a lot about his family, the era and what motivates him.

Lord John is a soldier, a brother and a son. He is also gay and he becomes involved with another man. This is NOT a homosexual love story. Over simplifying it by saying it is, does it a great injustice. I respect many people are bothered by that. As good as I think this book is, I would recommend skipping this book if it will bother you.

Really enjoyed this one. I felt for Lord John and his misadventures in love and war. I liked the narrator too, I could imagine Lord John having that voice.

This was a much better book than the Lord John, private matter book. Admittedly the male sex scenes were a little to much for me but that is why you can forward the book ahead. I enjoyed it but much prefer the voyager series.

What would have made Lord John and the Brotherhood of the Blade better?

After listening to the Outlander series I decided to try the Lord John series. I am disappointed I didn't read in any other reviews that the focus of the book would be so filled with gay sex.