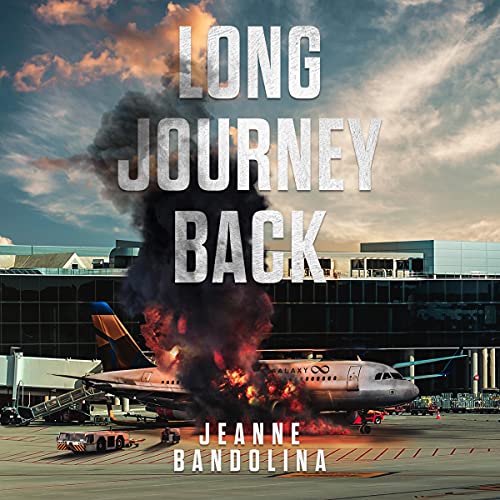 By: Jeanne Bandolina
Narrated by: Jarret Lemaster
Try for £0.00

Minutes before landing, a policeman enters the cockpit of a Galaxy Airlines jet and convinces Captain Alex Decker to request a different gate. Alex reluctantly heeds the warning, and minutes later, an explosion rocks the concourse where Alex should have parked his plane. On the heels of the tragic fire at the North Carolina airport, Captain Decker teams up with FBI Agent Maria Rodriguez, inadvertently pulling him back into a world he’d tried to leave behind after the death of his wife, Sarah.

Plagued by haunting dreams, PTSD, and repeated encounters with the mysterious policeman that no one else sees, Alex begins to question his sanity as he’s drawn deeper into the investigation. As Alex and Maria travel from North Carolina to Africa and Central America in pursuit of an unknown and deadly adversary, the stakes escalate. The deeper they delve into who’s behind the explosion and the trail of clues the policeman is trying to lead Alex to, the more personal - and deadly - the journey becomes.

What listeners say about Long Journey Back

New author Jeanne Bandolina has written a real page-turner, and I score it at the top of my favorite genre. Packed with boom-spilling action…a twisty, tight plot-line…and Captain Decker is a real barn-stormer, really! All this with a few manifestations from beyond, and a hope-filled ending. What a breakout for the Action/Thriller genre. And special kudos to narrator Jarret LeMaster’s capture of the characters, the action, and the feelings…just the right voice, consistently rendered.