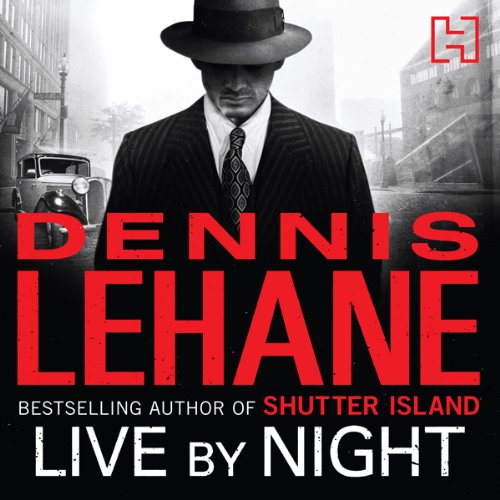 By: Dennis Lehane
Narrated by: Adam Sims
Try for £0.00

With all the grit and barely veiled violence of The Godfather, Live By Night is another masterful example of the brooding gangster novel. Lehane's vivid cast of characters are utterly believable and his plot is as complex as it is thrilling.

Joe Coughlin is 19 when he meets Emma Gould. A small-time thief in 1920s Boston, he is told to cuff her while his accomplices raid the casino she works for. But Joe falls in love with Emma - and his life changes forever.

That meeting is the beginning of Joe's journey to becoming one of the nation's most feared and respected gangsters. It is a journey beset by violence, double-crossing, drama, and pain. And it is a journey into the soul of prohibition-era America....

A powerful, deeply moving novel, Live by Night is a tour-de-force by Dennis Lehane, writer on The Wire and author of modern classics such as Shutter Island, Gone, Baby, Gone and The Given Day.

What listeners say about Live by Night

I really enjoy Dennis Lehane novels - I dont think Ive read (or listened to) one that I haven't thoroughly enjoyed, This was no exception - brilliantly well written plotted and read. Its hard to say more without veering into spoiler territory but this was one of my favourite novels of 2012 and is highly recommended.

I didn't realise how good Dennis lehane was until this month I plenty of good reading to look forward too. plus. well done audible it had tears laughter, violence and incredible characters

I literally couldn't stop listening to this but not wanting it to end at the same time!

couldn't get to see the film, but can understand why it is long. There is such a lot going on. But, very hard to stop listening .. even for the 2nd time!

I could not stop listening to this book. I have listened to near one hundred books now and this is in my top five.
Awesome narration and story didn't want it to end.
If you like gangster films this is up there with goodfellas and casino.

Listened to this over 3 long car journeys, got really into it and the time flew by. Great story and the narration is easy.

An Outlaw becomes a Gangster!

What did you like most about Live by Night?

Yes, this audiobook was good. I liked the development throughout the novel of Joe and the players around him. The best book I've engaged with in a long time. Vivid, violent and intelligent! I highly recommended this book.

What other book might you compare Live by Night to, and why?

It's not a book but the TV series Broadwalk Empire and to a lesser degree Peaky Blinders. The film Outlaws.

What does Adam Sims bring to the story that you wouldn’t experience if you had only read the book?

This book is a well kept secret. Brilliant gangster book. Really developed Joe character, in a way similar to what Puzo does with Micheal in the Godfather. Very talented writer, Lehane delivered his story with literally grace.

I don't know whether it was the narration or the story but I didn't find it as gripping as I though I would. Saying that, I get bored easily and rarely finish books, however I finished this, and was sad that it had ended, but I probably won't be buying World Gone By.

Nothing new to the genre but well constructed novel. The violence is measured and action not unbelievable. The characters you can warm to but the book feels like one big 'penny dreadful'. I just felt I knew what was going to happen next. If you want this book, I think it best to listen to it rather than buy a copy and read it 'old school' as Adam Sims does an excellent job narrating the story.

A tough gangster story by a great writer

The novel follows the criminal career path of Joe Coughlin, one of the sons of a corrupt police officer described in Lehane’s prior book “The Given Day” (which have not YET read).
It’s a though gangster story with likable and authentic characters, an engaging plot, witty and realistic dialogue and moments of real suspense alternated with times of reflection and observation of Florida and Cuba in the prohibition times. A thoroughly thrilling and satisfying read in every way.
If you know Dennis Lehane , this is a book at par with the prior ones ; if you do not, here is an excellent opportunity to discover a great writer !