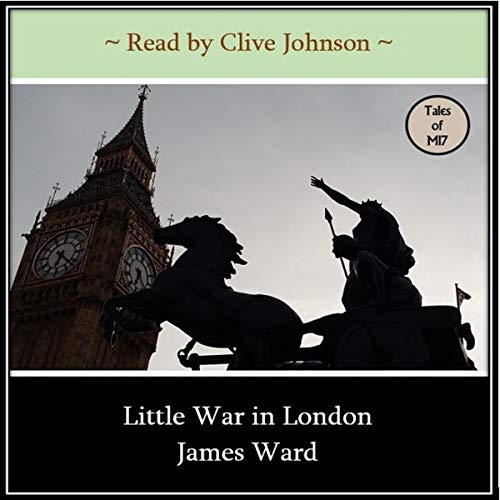 After an acrimonious US election whose outcome Moscow may or may not have influenced, can it really be that a few maverick intelligence agents from Russia and the United States are fighting a discreet battle to the death on some of London’s back streets? And that the corpses are piling up, out of sight of the British police? And even that the whole thing could spiral at any moment into God knows what version of a third world war? Or is that just more “fake news”? Well, luckily, no it isn’t. Not yet, anyway. Because the media still hasn’t heard about it. But that could change.

When MI7 Agent John Mordred is assigned to investigate, he discovers a veritable Schrödinger’s cat situation in which the relevant facts are neither wholly present nor entirely absent. And where some of the evidence lies closer to home than is comfortable. Slowly, possibilities emerge that surpass his greatest apprehensions. Or do they? Just what is the truth anyway, and why do we care?

What listeners say about Little War in London

Spies and hacks they think alike.

James Mordred is a spy, MI7's 'agent in fu!l sight'.His current girlfriend is a spy and she seems to be keeping him out of the loop about something. A meeting with a group of newspaper editors seemed to indicate that they were concerned about being fed false news to alter public opinions to influence a future general election to place an unexpected candidate in No.10,one who would then be open to pressure from outside. Meanwhile, a Little War is rumoured to be taking place with London as it's ground location - between agents of the USA and Russia. But is everything as it seems? That's for Mordred to untangle.

This rather British spy story mixes fiction with contemporary events and people, so many twists it's hard to keep up and complete with disappearances, murders, intrigue, food, non murders, double dealing, conspiracy and rather neat conversations. It is well written and densely packed. Enjoyable trips around London, too. The narration is also very English, Clive Johnson providing a good reading of the far from underdeveloped plot. His voice is well modulated, pleasant to hear and conveys a certain bland gravitas to the proceedings.

Little War in London is intrigue taken to one step further and is also good fun. Each chapter is preceded by a brief heading: listen out for them as they can be quirky, too. One simply states that it is, 'A chapter that's impossible to summarize in a heading' and another states that it's ' the 19th best chapter in the bolk.' Great stuff.
My thanks to the rights holder of the book who, at my request, freely gifted me a complimentary copy, via Audiobook Boom. A most enjoyable read.

A Bit Dry and Not in a Good Way

This book caught my attention because it had current events in its blurb. James Ward does manage to incorporate some of what's happening now into this book but that's where my praise ends. I found myself tuning out the audio, not because I couldn't follow it but because I got bored with it. This is one of the few books I did not finish and I have no plans of checking out any of the other books in this series. The narration was very flat to me. There was hardly any distinction between character's voices. Overall, I really got bored with the whole package. Make sure to listen to the sample before purchasing to make sure narration will suit you.

Another great book from Mr Ward. The continuing adventures of a realistic Spy. This guy is fallible and makes mistakes. Things often don't go his way but perseverance and good old fashioned detective work gets him through. The story runs at a good pace and is filled with Mr Wards usual dry, acerbic, British wit. An engaging and complex plot based in the immediate present, post Donald and Teresa running the world with their best mate Vlad. Very entertainin

This is a well crafted and interesting Audio book that will entertain most listeners.

It has done a great job in using current events to make the story more relevant and more likely to hold their
attention.

The Narrator does a good job with the material and helps the listener enter this world of intrigue and
Espionage.

I receivedba free copy of this audiobook in exchange for an unbiased review. I really didn't get into the book. The story was very slow. The narrator sounded like a robot.

I listened to Little War in London in two sittings and I'm left confused. It didn't make a whole lot of sense to me. It was about spying and espionage but the story seemed thin. I painted while I listened and I've been painting all my life so all my attention goes to the book but I was lost most of the time. Now and then a word or phrase or sentence would snap me back into it but would lose me almost as fast. I had a hard time identifying with the characters. I know this is book 1 in a series so I'm hopeful that the next book will delve into the characters more. Maybe I just didn't get it.

As for the narration by Clive Johnson, he was great. He did a fine job. He has a nice tone and I enjoy listening to him.