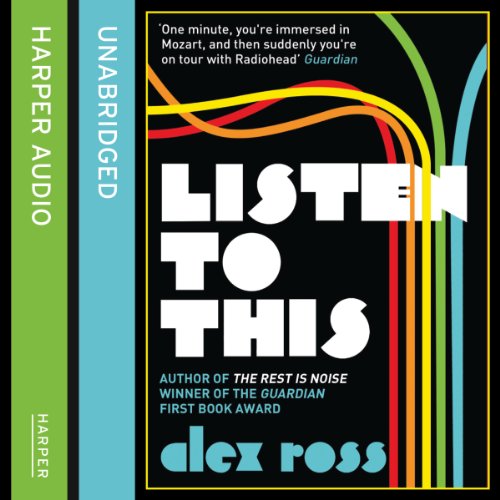 In Listen to This, Alex Ross, the music critic for The New Yorker, looks both backward and forward in time, capturing essential figures and ideas in classical-music history, as well as giving an alternative view of recent pop music that emphasizes the power of the individual musical voice in whatever genre.

Ross combines a selection of his New Yorker essays with new material that will serve as an introduction to some basic classical-music concepts and figures and will give an alternative view of recent pop music. It will demonstrate the essential equality of great musical creators in whatever genre.

It begins with 'Listen to This', his most famous New Yorker essay, an autobiographical account of his early passion for classical music and belated discovery of pop music in college. It sets forth the themes of the book as a whole: how classical music can become a vital part of wider contemporary culture, how it can survive and even prosper in the face of proclamations of its decline.

There follows a new essay tracing the history of the chaconne, a dance form based on a descending bass line, which originated as an erotic Afro-Caribbean dance in the 16th century, then migrated to Europe and inspired such Baroque masterpieces as Bach's Chaconne in D minor, and later found echoes in the bass lines both of 20th-century classical masterpieces and African-American blues. Led Zeppelin's 'Dazed and Confused' and Bob Dylan's 'Simple Twist of Fate', among other songs, extend the principle. This chapter develops, in a less personal way, the themes of 'Listen to This', and serves as a kind of whirlwind tour of five centuries of music history. Third in the introductory section is 'The Record Effect', an account of technology's impact on pop and classical music.

What listeners say about Listen to This

Fascinating - I’m even inspired to read the author’s New York Times articles.
Only a tiny comment regarding the production of the audiobook: the audio clips are so quiet compared to the voice. Perhaps future editions of the audiobook could balance the levels more evenly? Thank you

this was a really fascinating insight into music and it was so well written and I really got a lot out of it. in fact the way he wrote about music made you want to go back to original source.

Amazingly knowledgeable and well researched book that covers a wide range of music in great detail with no snobbery at all. I learnt so much! Alex Ross is great.