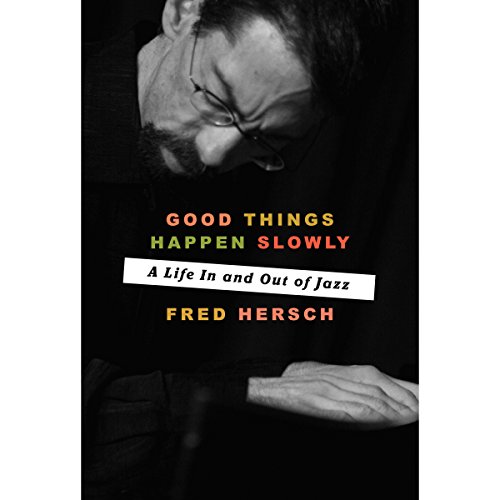 Jazz could not contain Fred Hersch.

Hersch's prodigious talent as a sideman - a pianist who played with the giants of the 20th century in the autumn of their careers, including Art Farmer and Joe Henderson - blossomed further in the '80s and beyond into a compositional genius that defied the boundaries of bop, sweeping in elements of pop, classical, and folk to create a wholly new music.

Good Things Happen Slowly is his memoir. It's the story of the first openly gay, HIV-positive jazz player; a deep look into the cloistered jazz culture that made such a status both transgressive and groundbreaking; and a profound exploration of how Hersch's two-month-long coma in 2007 led to his creating some of the finest, most direct, and most emotionally compelling music of his career.

Remarkable and at times lyrical, Good Things Happen Slowly is an evocation of the twilight of post-Stonewall New York and a powerfully brave narrative of illness, recovery, music, creativity, and the glorious reward of finally becoming oneself.

"Two powerful forces are at work in this engaging memoir - the personal rise of Fred Hersch from obscurity to undisputed prominence in the world of jazz and the devastating advance of AIDS into the neighborhoods of gay America. That these two disparate phenomena could be braided so evenly into a vivid, forward-rolling narrative is the passionate wonder of Good Things Happen Slowly." (Billy Collins, former US poet laureate)
"A motif running through Good Things Happen Slowly focuses on the power of self-confidence, an attribute that has long helped to define Fred Hersch's music. It is a quality no less evident in this brave memoir: a coming of age book about jazz, sexual identity, and creative authenticity that is also one of the shrewdest portraits of the New York club scene ever written." (Gary Giddins, author of Visions of Jazz and Bing Crosby: A Pocketful of Dreams)
"Honest and well-wrought...Hersch wonderfully captures the experience of ensemble-jazz improvisation - 'it's almost sex' - as well as the colorful characters throughout...Hersch's narrative really grips during his agonizing recovery from a two-month, near-death coma resulting from AIDS complications, an ordeal that lends depth and pathos to this candid memoir." ( Publishers Weekly)

my first experience with audio books but....

... I have to say it was quite immersive and inspiring. What an incredible story Fred Hersh has.... great audio book, with lots of inputs for young jazz musicians!

a wonder and a delight

Very well written. This book allowed us non- musicians an introduction into the process. Beautifully done! an inspiration to read.