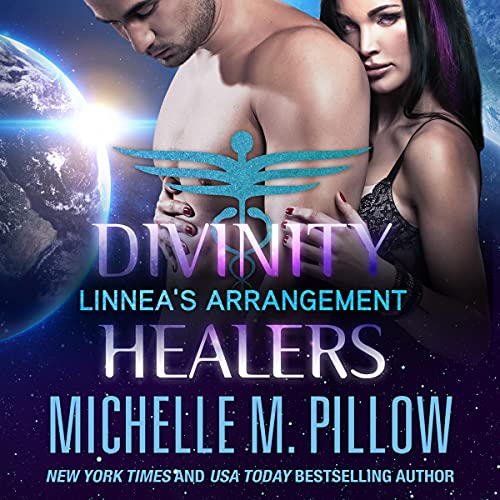 Beautiful, highly intelligent Linnea Nel wants what most women want - a career, love, and respect. But coming from a plane where order and anti-chaos reigns, the untrackable, untraceable and highly rebellious Linnea is considered a threat - to her family, society and her world. When her numerous arrests for reading library books become a public embarrassment to her politically minded sister, Linnea is forced on a dignitary mission to an alternate reality.

There are only two classifications of people on plane 187: Doctors and Not Doctors (Sans). Dr. Sam Swift is one of the highest ranking officials on the medical plane, answering only to the Medical Supreme. When the Medical Supreme becomes ill, it’s up to him to find a cure. Nowhere in this equation is there room - or time - to fall in love. And then he meets the exquisitely frustrating Sans Linnea Nel.

In the midst of the worst outbreak 187’s society has faced in decades, two people who never should have met fall in love. How can Linnea stay where she may be in danger? But how can Sam let the love of his life go?

What listeners say about Linnea's Arrangement

When Linnea’s dreams of being a doctor are thwarted, she is forced to become a dignitary and an assistant to another doctor.
During the visit to his plane, Dr. Sam who is tasked with showing her around, she finds him both rude and arrogant. However it is not long before they both realise that they cannot be without each other.
This is an enjoyable book, relatively short so ideal for a wet afternoon.

I’ve enjoyed all 3 books in the Divinity Healers series and was really looking forward to Linnea’s story. It did not disappoint and it was so lovely to see her get her HEA! Also nice to see a few loose ends tied up. I also love Rebecca Cook as a narrator and she’s done an amazing job with all these books!

Linnea Lives Up to Her Potential

Linnea's Arrangement is about Linnea Nel and Dr. Sam Swift's story. Linnea is an intelligent woman whom potential has been cut short. Because of her genetic, her body has been rejecting the chip tracker, making her untraceable. Now her world consider her as a public nuisance since she has been arrested several time for reading in the library.

Dr. Sam Swift is second to the Medical Supreme. When he met Linnea, he thought less of Linnea because she was just an assistant to Dr. Cecelia Camilla. Eventually, he discovered that there were more to Linnea than her appearance. She was smarter than anyone he has known.

When he discovered of Linnea's arrangement with his world, with the Medical Supreme, Sam now have to fight for the love of his life.

Listeners/Readers need to read the first two books to pieced the whole story together. Each story is told from the 3 couples' point of view during the same time frame. When put together, the trilogy makes sense. Linnea's Arrangement tied up the loose end to the trilogy. I didn't really get into this series until the third book.

The narrator, Rebecca Cook did a pretty good job. Linnea character is the only voice that seemed to have more life. It is probably due to Linnea's rebellious character. The voice for each of the doctors seemed so gruff.

I was given this audiobook by the author. I have decided to voluntary write an unbiased review for the book. I was not compensated or influenced in any way for writing this review.

This is the third novella in the Divinity Healers Series, an alternate reality romance, part of the Divinity Universe. This third installment is entertaining, fast-paced, and captivating. Linnea and Sam are fantastic characters. The world building is well crafted and intriguing. Rebecca Cook did an amazing job with the narration. I enjoyed it. Looking forward to listening to more books in the Series.

Linnea's Arrangement by Michelle M. Pillow is a fantastic addition to the Divinity Healers series!
Fun, fast read and just the right amount of steamy. Excellent audio narration. I have really enjoyed the 1st two novels and couldnt wait to find out more about Linnea.
This alternate reality is a perfect escape!

Book 3 in the series is a good story with a wonderful HEA and is a stand alone book. Recommend this book to all SYFY lovers. Looking forward to more books.

Another Great Addition to the Series

Another great addition to this series. Once again, Michelle M. Pillow has provided us with her classic writing style. The characters are well written, endearing and entertaining while the story line was engaging. The narrator did a fantastic job bringing this story to life and made this book a joy to listen to.

I received a copy of this audiobook and I am voluntarily leaving my honest review.

This is the last of The Divinity Healers trilogy & as per usual with Michelle M Pillow's audiobooks/books, this does not disappoint. Rebecca Cook, i.m.o. is also one of the best female narrators out there. She's always on point.

This is Linnea & Sam's story. If you listened to or read Seducing Cecilia, we were introduced to Linnea & her backstory in that audiobook. That poor woman was a pariah & criminal on her world simply because her body chemistry won't allow her to be tracked & she read books in the library. Just barbaric & sad.

An assistant assignment is forced on her & unbeknownst to her, it leads to the best place for her. Planet 187. And to the love if her life, Sam. Oh and let's not forget about (as I call him) "Supreme A$$" and the mysterious illness. Does it become contagious? Was it made in a lad and purposely given? Do Sam and the team fing a cure? Well, you'll just have to listen to the audiobook to find out.
It's super hot & sexy, full of mystery & intrigue, a HEA plus easily listen in one sitting

With a Michelle M Pillow's story and Rebecca Cook's narration you shouldn't hesitate to buy the audiobook with one click.

FANTASTIC OFF WORLD ADVENTURE ROMANCE guaranteed to entertain and engage you with emotions of empathy, outrage and all those warm fuzzy emotions too.
Well written, this authors books never fail to hook you in with great characters and stories. Recommended Series.
Beware sexually explicit.

Let there be chaos

Lennea comes from a planet with out chaos. Everyone is controlled and monitored worth chips. Everyone but her. Her body seems to reject them. After getting it trouble one to many times for reading she’s forced to an alternate reality to be dr Camilla assistant. The only thing she’s excited for is the chance to read to her hearts content but she gets a lot more out of the deal. This book has its bumpy ride and on more then one occasion my heart just broke for her but I love her determination and tenacity. I like the narrator over all I just think she talks very slow. I listened on 1.2 and it was perfect. She does well at making voice distinguished and emotions shine through.

I enjoyed reading all 3 books but I was so excited when we finally got to this installment because I was so eager to find out what Linnea was up to while she was in the room with Cecilia. This book delved a little deeper into what happened with the Medical Supreme. Trust me, the ending doesn’t disappoint and i would recommend this series to anyone who enjoys romance, sci-fi, futuristic medical, and steamy scenes. Definitely for those immature readers.
In order to appreciate the Divinity Healers, I’d recommend reading in order.
The narrator, Rebecca Cook is fantastic. The variety of tones and inflections she used were great and easy to follow along. Her voice kept me intrigued and I thoroughly enjoyed the audiobook.