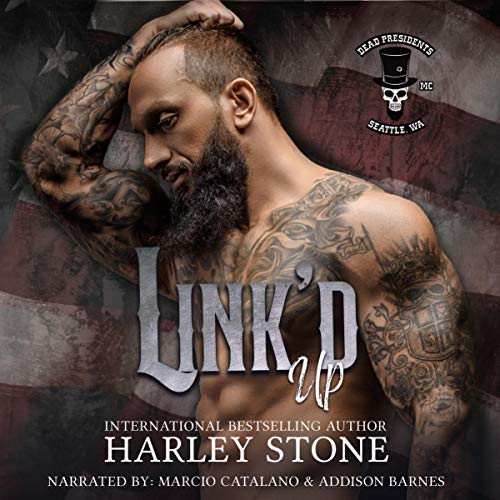 President Tyler “Link” Lincoln of the Dead Presidents MC runs a club dedicated to helping military vets readjust to society. When his sergeant at arms is arrested for the attempted murder of a prominent Seattle figure, Link’s search for a lawyer brave enough to fight for justice leads him to an alluring defense attorney with a bleeding heart and a steel backbone.

This isn’t the first time Emily Stafford’s commitment to defending the falsely accused has put her in harm’s way. Smart, cautious, and independent, she knows how to defend herself. At least, she did until she joined forces with one sexy, overbearing, tattooed MC president.

Flames run hot as Link and Emily seek shelter in the club’s converted fire station, working against the clock to uncover the truth and save a somewhat innocent man.

What listeners say about Link'd Up

Love this is finally on audio

I have long been a fan of Harley Stone’s writing, and the Dead Presidents my favorite series of hers. I loved hearing this book come to life, it’s been a while since I read it. While the narrators were new to me, I did enjoy their work. I sincerely hope Ms Stone is able to put the rest of the series in an audio format.

Highly recommend!! Suspense, romance and some humor excellently narrated. Hope rest of series will be on audiobook.