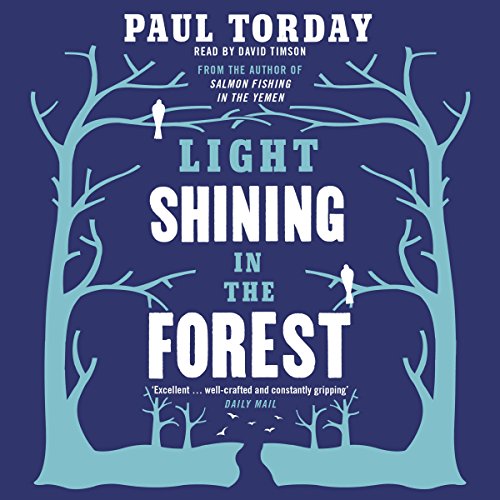 Light Shining in the Forest

By: Paul Torday
Narrated by: David Timson
Try for £0.00

Norman Stokoe has just been appointed Children's Czar by the new government. He sells his flat and moves up north to take up the position. However before his first salary cheque has even hit his bank account, new priorities are set for the government department for which he works. The Children's Czar network is put on hold but it is too late to reverse the decision to employ Norman.

So he is given a P.A. and a spacious office in a new business park on the banks of the Tyne. He settles down in his new leather chair behind his new desk, to wait for the green light to begin his mission. The green light never comes. What does happen is that two children go missing. As Children's Czar, surely this case should fall within his remit, but Norman has built a career on doing nothing, on stamping pieces of paper with "send to the relevant department". Now, faced with a campaigning journalist and a distraught mother, he is forced to become involved. The search will take him to dark places and will make him ask questions about the system he is supposed to uphold.

Read by David Timson. David Timson has recorded numerous audiobooks and poetry compilations and has recording the complete Sherlock Holmes stories for Naxos. He wrote The History of the Theatre, which won an award for most original production from the Spoken Word Publishers Association in 2001. His production of Richard III won Best Drama Award from the SWPA in 2001 and in 2002 he won the Audio of the Year Award for his reading of A Study in Scarlet.

What listeners say about Light Shining in the Forest

The whodunit style storytelling of the child abductions.

The most interesting was the terrifying yet scarily and in most cases accurate manner that missing children and their families get judged and pushed to one side by the authorities. Least interesting would be some of the characters back stories.

I felt this book was conflicted in its genre and I don't think it flowed well because of that, one minute you're engrossed in this Prime Suspect style abduction case, the next its like an episode of most haunted. I enjoy both mystery and supernatural stories but the 2 together is difficult to pull off and the contrast in this case stopped me from fully enjoying the story, but i did not hate it.

This simply written but chilling novel starts with the shocking statistic that one child disappears every five minutes in the UK. I had to look it up, and was amazed to discover it's true. The narrator, David Timson, does an excellent job in conveying this unsettling narrative of child abduction. Don't listen with the lights out!

Yes, because it kept me gripped and listening until it was finished.

Although I have only just read this book,I havealready forgotten the names of the characters.... old age LOL. The girl was my favourite character, because although she was not of any importance to the main characters at the beginning, she managed to get herself to the centre of the action. Also she was the only one who had concern for the children and wasn't only helping out of self interest.

Laid back but gave plenty of amosphere to this unpleasant subject.

I felt very involved, emotionally about the fate of the children.

I am not usually interested in supernatural fiction, but this aspect of the story was kept in the background and added to the plot rather than giving an easy get out.

The Public Service vs The Individual

Would you consider the audio edition of Light Shining in the Forest to be better than the print version?

I haven't read this book, I have only listened to it.

Has Light Shining in the Forest turned you off from other books in this genre?

I don't think it is very easy to slip this book into a genre.The story is horrible, macabre, bizarre - in the class of weird that I put M J Hayder - but it is not only that. It is more; and more important.The motif of unaccompained children being taken by someone that they know, rather than a stranger is very, very unsettling. All the more so when the listener realises the reason behind the kidnappings. What happens to the children is not dealt with in any detail, and if it were, it would be unbearable. BUT - This book is written by a man who clearly understands the machinations of the Public Service, in particular, its awful failings and bureaucracies. He very cleverly juxtaposes these with what is happening to the kidnapped children and how The System fails them. And fails them very badly.He also shows how the system, being amoral, can never be changed nor overcome by an individual; and so, in the greatest irony of all, the listener discovers that Norman, the Children's Czar without a job but who cannot be removed from his public service post until he transgresses the public service codes, Norman then enters that other massive and amoral bureaucracy - the Roman Catholic Church!

Which character – as performed by David Timson – was your favorite?

No favourites, I just found it very easy to follow the book because of the clarity of David Timson's characterisations

If you could rename Light Shining in the Forest, what would you call it?

No Picnic For Teddy Bears

What did you love best about Light Shining in the Forest?

Norman for some strange reason is my favourite character. He finds himself in this book & is willing to not look away when confronted with difficult situations.

Which character – as performed by David Timson – was your favorite?

Willy was well performed by David Timson, as were all the characters.

I didn't want to stop reading. I read it in 2 days & if I could, would've read non-stop.

I adored Paul Torday's "Salmon Fishing in the Yemen" & "The Irresistible Inheritance of Wilberforce".

This has a more traditional "who dunnit" storyline, the other two are more in a catagory all of their own.

But we do find out early on what part various characters play & are just holding our breath to find out whether the other characters catch up to our knowledge.

It certainly falls into a more traditional category such as mystery, suspense or thriller, but as usual with Paul Torday this book has a fascinating, gripping quality that makes you want to read on.

If you're looking for something more literary go to "Salmon Fishing" (you'll be delightedly surprised) & "Wilberforce", but this is another good work from Torday & if you've enjoyed his previous work & like his style, well this certainly carries his own flair but I wouldn't rank it as "literary fiction" as his other books I've mentioned. Still a great read. And coming from someone who never reads mystery, thriller or suspense novels that is something.

Narrator is easy to listen to - does a good job with the book.