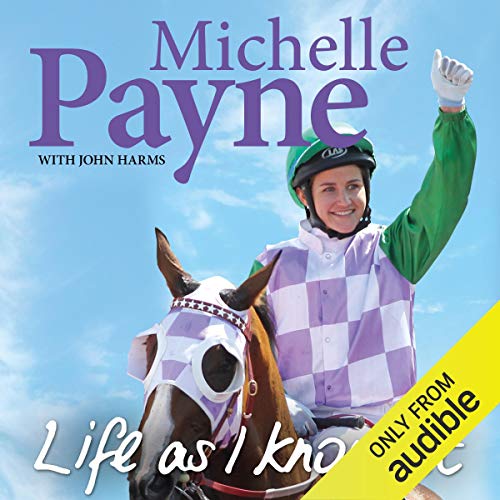 Life as I Know It

In Life as I Know It, Michelle Payne tells her deeply moving story. It will lift your spirits, stir your heart and give you courage.

Michelle was six months old, the youngest of eleven children, when the family was hit with the tragic death of their mother, Mary. Their father, Paddy, a renowned horseman, raised his children alone. As a family, they all took on the daily demands of racehorses and a dairy farm as well as school and work. Family meant everything.

Michelle was put on a horse aged four. At five years old her dream was to win the Melbourne Cup. At 30 she rode into history as the first female jockey to win the cup. Her strapper was her brother, Stevie. So when she declared that anyone who said women couldn't compete with men in the racing industry could get stuffed, the nation stood up and cheered.

It was a moment that inspired everyone who dreams of beating the odds.

What listeners say about Life as I Know It

Absolutely loved it. Great read.
Inspiring. Michelle Payne and Stevie Payne are inspiring, they positive impact in our Society. Michelles' dad amazing person and they are an amazing family.

Great listen for the horse lover!

This is a wonderful cinderella story of hard work, diligence, and a bit of luck coming together to produce a win in the Melbourne Cup. I appreciate the overwhelming message of integrity, tenacity, and grit. Bad things happen. You find your strength as you work through them.

As the story develops, there is a significant amount of name dropping that detracts from the overall message unless you happen to know the who’s who of Australian racing.