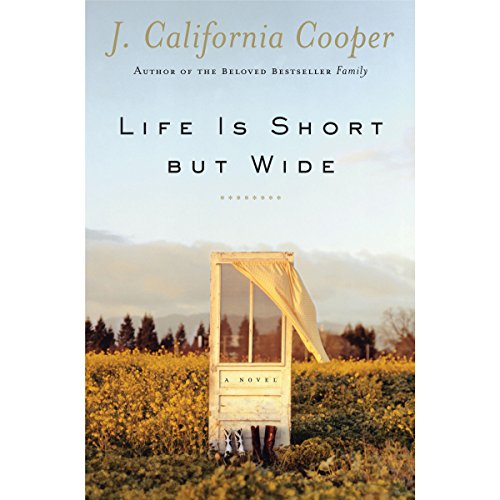 Life Is Short but Wide

Life Is Short but Wide

Beloved writer J. California Cooper has won a legion of loyal fans and much critical acclaim for her powerful storytelling gifts. In language both spare and direct yet wondrously lyrical, Life is Short but Wide is an irresistible story of family that proves no matter who you are or what you do, you are never too old to chase your dreams.

Like the small towns J. California Cooper has so vividly portrayed in her previous novels and story collections, Wideland, Oklahoma, is home to ordinary Americans struggling to raise families, eke out a living, and fulfill their dreams. In the early 20th century, Irene and Val fall in love in Wideland. While carving out a home for themselves, they also allow neighbors Bertha and Joseph to build a house and live on their land. The next generation brings two girls for Irene and Val, and a daughter for Bertha and Joseph. As the families cope with the hardships that come with changing times and fortunes, and people are born and pass away, the characters learn the importance of living one's life boldly and squeezing out every possible moment of joy.

Cooper brilliantly captures the cadences of the South and draws a picture of American life at once down-to-earth and heartwarming in this-as her wise narrator will tell you-"strange, sad, kind'a beautiful, life story." It is a story about love that leads to the ultimate realization that whoever you are, and whatever you do, life is short, but it is also wide.

J.California Cooper has never disappointed me and "Life Is Short and Wide" is no exception. This story touched me and spoke to life's twist a turns, as well as, the unexpected changes and how these changes affect the lives of those you love beyond the length of your life. Highly recommened.

Would you listen to Life Is Short but Wide again? Why?

Yes. This was the second listen. I drove family members from Atlanta to Savannah (and back) and played it for them. They Loved it; they actually cheered out loud!

What other book might you compare Life Is Short but Wide to and why?

Their Eyes Were Watching God

Which character – as performed by Adenrele Ojo – was your favorite?

Tot was too much!

If you could rename Life Is Short but Wide, what would you call it?

J. California Cooper is a treasure!

Great for a long car ride...

I've been a lover of J. California Cooper's work for over 20 years. Her short stories are wonderfully entertaining. The ease with which they flow is a true testament to the author's storytelling abilities.

This novel seemed to be a long, drawn out version of her signature short-story style. For some characters, the author skipped years, even decades, without comprehensive explanation. Three-quarters of the way through, I was begging for the novel's end! I forced myself to keep listening out of respect for the author and literature in-general.

The narrator hit her stride about 30-60 minutes into the story. She was initially irritating, seemingly trying to force a "countrified" accent. But when she hit her stride, she nailed it; both her diction and tonal inflections became on point! The narration then flowed mellifluously!

Curiously, at the very end, the author introduced the ideology of Jehovah's Witnesses. It made the ending a bit disjointed.

I'd recommend listening to this novel if one is taking a long car ride.

Life all ways can told many ways , but always tells the story of many lives

I was born South Carolina raised in N.y City, This Story Just took me home

excellent, enjoyed ever minute of the book. Once I started didnt want to stop.

Country, Gritty, Real, and all about Family

I love the way the author creates. She expresses the wants and efforts of the characters. Shows the result of no effort and the result of patience. Her writing has no comparison and her imagination is awesome. Read them all and now am listening to the ones available.

At 5'2 220lbs. I am life. This story is a testament and guide to patience and understanding and what comes in the future...To. trust and knowing what you know. To finding a way to tel, the truth about your feelings, in an effort to save someone's life. I use to say life is so short that I am a giant...but I now know what I meant.,,it's a panoramic view. Enjoyed it and so will you.

This story tells me a lot can happen in a little while. I am glad my book club read this book. I was hesitant to get it started but once I got started it was hard to stop. So many misfortunes but as well it shows how certain situations can prepare you for something better. I wish the ending didn't play out so darn long, but that was the value in it. Very good read.

I recommend this book to everyone

J. California Cooper wrote for human beings. Her charachters are well developed and her stories are relatable. All of her books should ne required reading. The narrator was perfect.