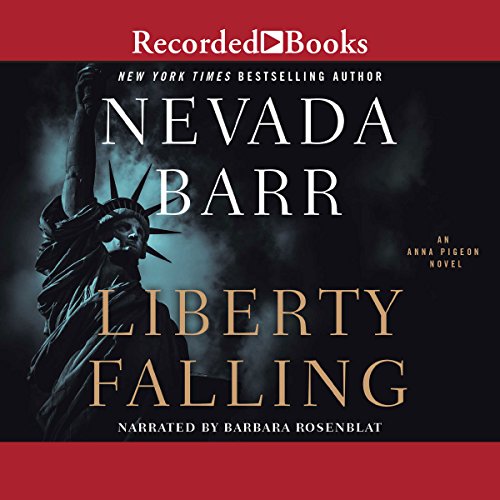 By: Nevada Barr
Narrated by: Barbara Rosenblat
Try for £0.00

In Liberty Falling, Anna leaves the rugged countryside of Colorado to face the concrete wilds of New York City. As soon as she hears her older sister is gravely ill, Anna rushes to the Big Apple to sit at her bedside.

Between hospital visits, she relaxes at the park service quarters on Liberty Island and explores the crumbling ruins of Ellis Island, where thousands of immigrants once were processed. Rest escapes her, however, when a teenage girl mysteriously plunges to her death from the Statue of Liberty - and Anna herself suffers a dangerous tumble. The Park Service claims the falls could only be accidents, but Anna wonders if there is a common purpose behind them.

Nevada Barr's vivid descriptions and narrator Barbara Rosenblat's dramatic performance transport you to New York City to share in all the danger and the excitement.

What listeners say about Liberty Falling

Just not up to par

I typically enjoy Nevada Barr stories with Ann Pigeon, but this one dragged for me. Too much of describing what she didn't like about New York, not enough to the plot. Much time was spent in the Hospital with her sister and former boyfriend...now interested in her sister. Only at the very end did any action get started. I love the reader, Ms. Rosenblatt.

Everything great except the cover picture

A re-listen and as always enjoyed Rosenblatt's performance. Love Anna Pidgeon series even the second or third time around.

Not my favorite Anna Pigeon story

I have listened to, and loved, several of Nevada Barr’s Anna Pigeon books. Liberty Falling, though narrated well, was not a favorite. The story seemed to drag, even with the interesting Liberty Island setting.

Nevada Barr is clearly an astute observer of humanity. This story is so very much of these times. Some of the language used in this story is brutal, but serves the plot and helps tell the story.

Nevada Barr is amazing at crafting sustained suspense and near death experiences, as well as compelling mysteries and plausible characters.
Ms. Rosenblatt brings the emotion and scenery to life.. high applause & appreciation for both.

Was a great story with more characters development. Thriller will keep you guesting to the end.

This is one of my favorite stories for some reason. Ms Barr does an excellent job of describing the islands and it makes me want to go there and see all.
My only complaint is The narration. Ms Rosenblat does a good job but she’s not great at character voices. She gets some really well but others she falls short on. I’ve noticed this in other books she’s narrated. It doesn’t keep me from buying a book but if it’s narrated by a different person I usually choose that one instead.
Love this story though!!

Exciting, illuminating informative Written so clearly of charters and place, I am forever thankful I found the indomitable, emotionally frightened, altruistic and scathing, Anna Pigeon, aKA Nevada Barr
Yahoo!!!