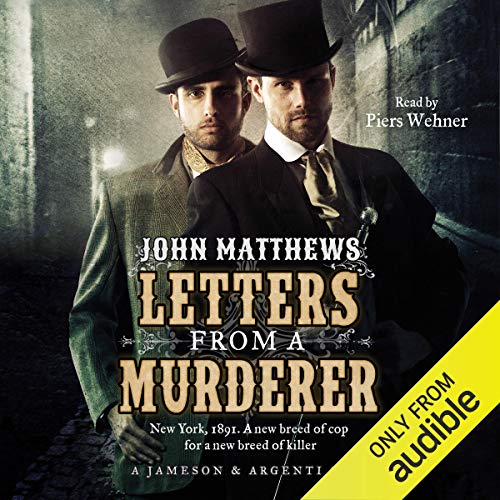 Letters from a Murderer

By: John Matthews
Narrated by: Piers Wehner
Try for £0.00

New York, 1891: a rapidly changing city, torn between lamplight and electric light, where the burgeoning steel and railway industries attract a flood of humanity from every corner of the globe, fuelling cutthroat gangs, corruption and vice. A prostitute is found brutally murdered. Immediately, fear starts to spread. The victim bears the same hallmarks as Jack the Ripper's recent killing spree in England.

Could it be that the Ripper has crossed the Atlantic to fresh killing grounds? Or is this simply a copycat murder? To solve the case, one of the original English Ripper pathologists, Finley Jameson, is teamed up with Joseph Argenti, one of the new 'untouchable' detectives, handpicked by a New York Mayor eager to fight corruption.

What listeners say about Letters from a Murderer

I could not resist using an obvious - but nonetheless descriptive - headline. Think Jack the Ripper comes to NYC, complete with abundant gaslight atmosphere, a tightly woven mystery and great narration. If you are looking for one of those perfectly fabulous Victorian-era pieces (the story takes place on both sides of "The Pond"), this book never fails to deliver.

Our hero is an intense chap with a troubled past that leads to a difficult present. As the brilliant criminal forensics analyst, his character is believable, captivating, charming and complex. His side-kick in NYC is a policeman with his own share of challenges. And, let me not forget to mention our protagonist's personal assistant, Lawrence, who is also awash with his own personality issues.

I worked though this 11+ hour novel in two days, I was so entranced with it. This seems as though it is the PERFECT property for a Hollywood option. As you listen, you start to imagine who would be playing the myriad people that populate the story.

In a phrase, "I loved this book!" If you like Anne Perry, Caleb Carr, P.D. James, you would enjoy this author's writing. For a person with a pretty weak stomach, I was able to survive the crime scenes and attendant details without feeling 'icky.' There is a certain degree of creepiness that anchors the story, but it works very well. Would love to see another book featuring these characters.

I throughly enjoyed this novel - I hope the first of many more novels in this new series … great story, absorbing characters, great pace, phenomenal reader … I haven't enjoyed a novel this much in awhile … this is the first novel I've heard Piers Wehner narrate and it was exceptional - he made it hard to have to turn off my iPod … John Matthews has written two new great historical fiction characters, Finley Jameson & Joseph Argenti, and I look forward to the next adventure! … I highly recommend "Letters from a Murderer"!!!

I really enjoyed this novel. It brings the Ripper to the US and you just don't know who it will turn out to be. The author put in multiple red herrings and developed his characters so that you were able to relate to them. You didn't want it to be the main protagonist or several other prominent characters and yet you just don't know for sure until the very end. The narrator was good and added to the overall tale.
One caveat of my review: I love long audible books so I rarely mind a lot of details in my novels.

What made the experience of listening to Letters from a Murderer the most enjoyable?

Piers Wehner's narration was perfection. Each character's voice was distinct. The novel played out like a radio program from the 1940's. It was a pleasure to listen too.

What was one of the most memorable moments of Letters from a Murderer?

Matthews writing grips you and doesn't let you go until the end. No one is safe from the Ripper. One such scene is when Argenti takes to the sewers following a lead. Its wrought with tension and reminiscent of Gothic horror.

The scenes in which Jameson and Ellie interact with each other stood out among the rest. You have a well classed gentleman going out of his way to treat Ellie, a prostitute, as more than just her circumstances. Ellie's quick wit and banter put her as an equal to Jameson, which he finds endearing. I'm curious to see where this relationship goes.

Lawrence's internment in Bedlam and another such facilities is something you cannot forget. It sticks with you, as Lawrence who is deemed mentally insane, but today would most likely be determined to be autistic. His experiences and his meeting and becoming a ward of Jameson's is touching and powerful. Both characters battle their own personal struggles with different forms of mental illness, and yet where one fails the other is there to give a helping hand.

Beware, the murder and autopsy scenes are gritty.

I'm excited about this series. I really liked the two main characters. I've been searching the net looking for the release date of next book. The story got me interested from the start. If you enjoy mystery stories set in the Victorian era this ones for you!

Overall the book is good but not great. It is, however, very poorly written. If you appreciate proper grammar and usage, this book will make you crazy.

The narrator is better than average.

Unqestionabley a great story, strong plot' well performed, however there were lapses in sound level on rare occasions but certainly not enough to spoil the story. i kept telling myself this is a story, a fictional work, but it is so well pt together and presented that you will begin to feel that is history. I can only say past reviewers got it right, a story well worth five stars

I enjoy period pieces, especially detective novels. This one did not hold my interest. I read the murder series by David Morrell. If you have any interest in this type of book read Morrell's first and you will see my point.

supper interesting. kept my attention throughout. liked both lead characters and tempo of the story. narrator has a nicevoice