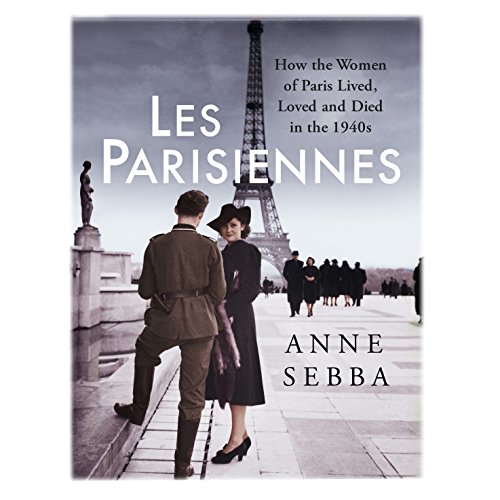 By: Anne Sebba
Narrated by: Charlotte Strevens
Try for £0.00

What did it feel like to be a woman living in Paris during the years 1939 to 1949? These were years of fear, power, aggression, courage, deprivation and secrets until, finally, there was renewal and retribution. Even at the darkest moments, dogs and cats might be abandoned howling on the street, the swastika flew from the Eiffel Tower and danger lurked on every corner, but glamour was ever present. French women wore lipstick. Why?

By looking at a wide range of individuals, from collaborators to resisters; actresses and prostitutes to teachers and writers; native Parisian women and those living in Paris temporarily, including American women and Nazi wives; muses and mothers; housewives and mistresses; fashion and jewellery designers; and nurses, journalists and spies, Anne Sebba reveals truths about basic human instincts and desires.

It was women more than men who came face-to-face with the German conquerors on a daily basis as waitresses, shop assistants, or prostitutes or merely on the Metro, where a German soldier had priority when it came to seats. Parisian women mostly did whatever they needed to do to survive. Many of them faced life-and-death decisions every day.

But this is not just an audiobook about war. Les Parisiennes is an audiobook book about the effects of war and, for those who survived, how they came to terms with their own behaviour and that of others. The second half of the decade can be understood only by examining the catastrophic shock of the first. Although politics lies at its heart, Les Parisiennes is an account of the lives of the people of the city and specifically, in this most feminine of cities, its women and young girls - including thousands who grew up fatherless.

What listeners say about Les Parisiennes

So many Les Parisiennes

Would you try another book written by Anne Sebba or narrated by Charlotte Strevens?

Fewer women to focus on. There were so many women covered that very early on I lost track of who was who. Had she focused on less women and followed fheir stories it would have been easier to follow.

Was Les Parisiennes worth the listening time?

Yes but for the above reasons would have been better.

Interesting and I would recommend if you are interested in the period of history covered.

Fascinating, eye opening, sad reading about the reality of France under the German occupation in WW2.