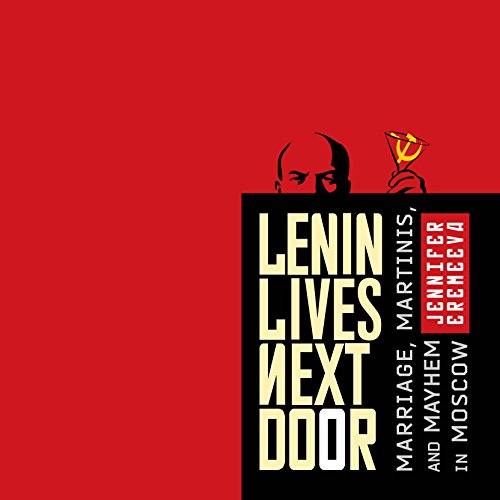 "You can't make this stuff up." So says American writer, imperial Russia enthusiast, and veteran expatriate, Jennifer Eremeeva, who has lived for the last 20 years in Russia with HRH, her Handsome Russian Husband (occasionally a.k.a. Horrible Russian Husband) and their growing daughter. Luckily for Eremeeva, she didn't need to make up most of the events that inspired this, her first work of fiction. When she (and her alter-ego heroine, coincidentally named Jennifer) quit her job to write full time, she became enthralled with the dingy gray building across the courtyard from her apartment, where, it turned out, Vladimir Lenin's embalmed corpse was routinely freshened up and preserved. The result is Lenin Lives Next Door: Marriage, Martinis, and Mayhem in Moscow.

Based on Eremeeva's two decades in Russia, Lenin Lives Next Door knits together vignettes of cross-cultural and expatriate life with sharp observation, colorful historical background, and engaging humor. Each thematic chapter is an anecdotal exploration of an aspect of life in today's Russia, told with the help of a recurring cast of eccentric Russian and expat characters.

Lenin Lives Next Door introduces listeners to Russians in their everyday milieu: at their dachas, in three-day traffic jams, and celebrating their 300-plus public and professional holidays with mayonnaise-based salads. Lenin Lives Next Door is an inside look at Russia by a recovering Russophile.

What listeners say about Lenin Lives Next Door

Jennifer E. is a fabulous writer and narrator!

If you could sum up Lenin Lives Next Door in three words, what would they be?

Would you recommend Lenin Lives Next Door to your friends? Why or why not?

Oh but how I loved this book. I adored Ms. Eremeeva's witty repartee on every topic, from huband's work antics to the disconsolate waitress to airport antics. I would have enjoyed listening to more of Ms. Eremeeva's stories and less of Russian history, but she was writing for context and I understand this.

Have you listened to any of Jennifer Eremeeva’s other performances before? How does this one compare?

I was not aware that Ms. Eremeeva narrated any other book! She is definitely in my top 5 of narrators. Great voice, great great cadence, I really felt her passion and energy.

Who was the most memorable character of Lenin Lives Next Door and why?

This felt so first person, I didn't pull out characters. I really enjoyed Ms. Eremeeva's stories and voicing of her gay friend.

This book was good at times,then there were times I just gritted my teeth and wenet wit it.I liked the idea of seeing Russia through the eyes of an ex pat.I may have 'seen' too much.Both written and narrated by Jennifer Ermeeva,sometimes she was good,others not so much.I got a bit confused with all the names and characters and where they fit.Maybe reading it in black and white would have been better.
I was given this book free of charge for an honest review.

Could be called THE REAL HOUSEWIVES OF MOSCOW

Like many of the reviews, I have mixed feelings about this book.

The idea of reading about Ex-Pat life in Russia is very appealing to me, and there were certain stories that really held my fascination. I for one, was disappointed that we didn’t get the history lesson Jennifer put together. I think hearing her interpretation, combined with her real life experience and thoughts about modern life in Russia would have been a fascinating read. However, that’s not what the book is.

Instead, a lot of it felt very much like a reality tv show which could easily have been called THE REAL HOUSEWIVES OF MOSCOW. While some of that stuff was interesting, for the most part I kept waiting to hear more about what actual life in Russia is like. For instance, I really enjoyed her explanation about the traffic & cops and the Red Hand Shake. Of course hearing about the excess of Russian spending does fit into the category of what life there is like I really only needed ONE story...perhaps the suit buying excursion.

As for Jennifer’s narration, it’s hit or miss when authors narrate their own books. I think Jennifer did a very good job. My only criticism is that there were quite a few odd pauses (probably at page turns), and some lip smacking / mouth noise I could have done without. Her strength lies in her familiarity with the Russian language and who these people are.

There are a lot of things that are charming about this book. Her nickname for her husband, HRH, the varying characters (and her interpretation of them), and her obvious love for Russia. It’s worth giving a listen to, or reading if the topic is of interest to you.

I’d love to see her write an American’s observations of Russian history and how it affects life there today through her humorous filter.

Relaying a conversation between book-Jennifer and a friend author-Jennifer says that this book isn't really going to be non-fiction but more autobiographical fiction because "you cannot make this stuff up, but it does lend itself to embellishment". Did this conversation happen or is it itself a part of the embellishment? Who knows.

Jennifer Eremeeva retells (embellished?) stories of her 20-odd years living as an American in Russia after having moved there in the late 80's, just before the fall of the USSR. He has a Russian husband and a daughter who seems to have a real identity crisis (is she Russian or not? she thinks she is but everyone tells her she is a foreigner).

Some of the stories are much more entertaining than others. The stories I enjoyed most were the ones around their daughters education and her using British texts. The aforementioned identity crisis relating to being a child of an ex-pat. The Russian history stuff.

Other stories didn’t work as well. Some come across as "rich people problems in Russia". Some of these provide interesting insight into how Russian business works, but often it more feels like a rich people complaining session. The book also suffers early on due to a story focusing on a group of ex-pats and their book club. Other than the fact that they are all ex-pats and thus somewhat forced into a friendship group that may not normally have formed this story is one that could have happened anywhere and doesn't fit with the "Russian insight" idea. If this story came later in the book it probably would have been fine, but as early as it was it just meant the book lost momentum.

Eremeeva does well with narration, considering it is author narrated and she isn’t a professional narrator. Some of the comic timing feels slightly off but she gets the emotion or sarcasm or whatever required, which is good considering she put it there.

A note on my scoring: Listening to this book I swung back and forth between "I like it" and "I really like it", swinging it between a 3-star and a 4-star book. Same with the narration. In the end I settled that it was a 3.5 star for both, thus the strange "overall" being higher than the individual story or narration scores.

When it was good, I really got into the author's depictions of Russian culture, but when it was not ... we're talking "Rich Peoples' Problems: Moscow" as a reality show, which is just the teensiest bit difficult to identify with. Your Mileage May Vary here, so AYOR as they say (At Your Own Risk).

A hilarious portrait of expat life in Moscow

If you could sum up Lenin Lives Next Door in three words, what would they be?

The narrator/protagonist -- because of her complex, often ambivalent feelings about contemporary Russia. Although often exasperated by modern life in Moscow, she has a great love of Russian culture and a deep knowledge of its history. This lets her keep laughing even when she's wringing her hands in frustration.

Have you listened to any of Jennifer Eremeeva’s other performances before? How does this one compare?

I believe this is the author's debut. Haven't heard anything else she's done.

If you could rename Lenin Lives Next Door, what would you call it?

Confessions of a Recovering Russophile.

Let's face it: most writers are weak audiobook readers. Eremeeva is the exception. She enunciates, dramatizes, and nails a range of accents and languages. And she knows just how to bring her book's humor to the listener's ear. Eremeeva's not an author reading *at* you; she's your lifelong BFF telling funny stories over a bottle of oaky, buttery chardonnay.

From Russia with love!

Lenin Lives Next Door: Marriage, Martinis, and Mayhem in Moscow by Jennifer Eremeeva. What a book! Jennifer Eremeeva LOVES Russia. I do to! I been to St Petersburg, and i loved it. We are like in this point. I will quote Publisher's Summary: " Lenin Lives Next Door introduces listeners to Russians in their everyday milieu: at their dachas, in three-day traffic jams, and celebrating their 300-plus public and professional holidays with mayonnaise-based salads. Lenin Lives Next Door is an inside look at Russia by a recovering Russophile" I think that says it all to be honest. It is that good!

When a author reads their own book it gives it a spesial "flair". Jennifer Eremeeva reads her own book, and i could not think this book without her voice on it. 9 hrs and 38 mins with Jennifer Eremeeva are spent well! I loved her reading her own book! Jennifer Eremeeva makes me wish i lived in Russia, and that is kind of hard! She loves a country i have good memories about, and i think that is nice!

Started off OK then got very inane.

Would you listen to Lenin Lives Next Door again? Why?

Would you ever listen to anything by Jennifer Eremeeva again?

Not really.The swearing was not necessary also.

Her voice is nerve wreaking.

Who was the most memorable character of Lenin Lives Next Door and why?

The characters were all lack lustre.