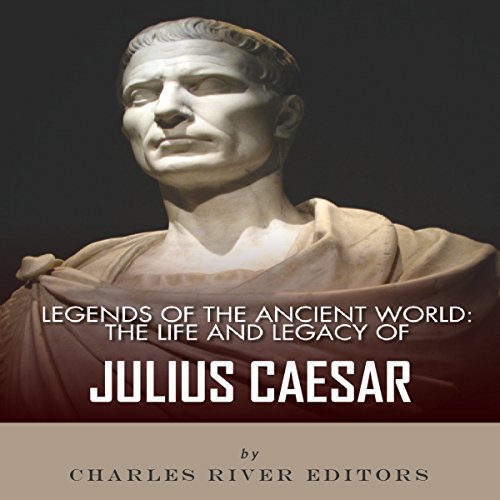 Legends of the Ancient World: The Life and Legacy of Julius Caesar

"I would rather be the first man in a humble village, than the second man in Rome" - Caesar

A lot of ink has been spilled covering the lives of history's most influential figures, but how much of the forest is lost for the trees? In Charles River Editors' Legends of the Ancient World series, listeners can get caught up to speed on the lives of antiquity's most important men and women in the time it takes to finish a commute, while learning interesting facts long forgotten or never known.

Possibly the most important man of antiquity, and even all of history, was Julius Caesar. Alexander Hamilton, the famous American patriot, once remarked that "the greatest man who ever lived was Julius Caesar." Such a tribute, coming from one of the Founding Fathers of the quintessential modern democracy in reference to a man who destroyed the Roman Republic, is testament to the enduring mark that Caesar left upon the world. The ultimate conqueror, statesman, dictator, visionary, and opportunist, during his time in power Caesar expanded the borders of Rome to almost twice their previous size, revolutionized the infrastructure of the Roman state, and destroyed the Roman Republic for good, leaving a line of emperors in its place. His legacy is so strong that his name has become, in many languages, synonymous with power: the Emperors of Austria and Germany bore the title Kaiser, and the Czars of Russia also owe the etymology of their title to Caesar. His name also crept further eastward out of Europe, even cropping up in Hindi and Urdu, where the term for "Emperor" is Kaisar.

What listeners say about Legends of the Ancient World: The Life and Legacy of Julius Caesar