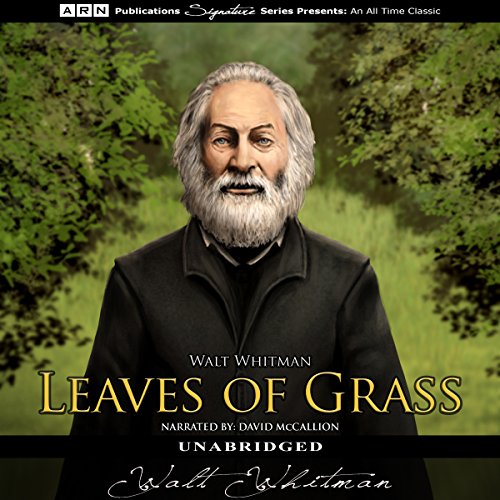 By: Walt Whitman
Narrated by: David McCallion
Try for £0.00

This collection of poetry by American poet Walt Whitman was originally published in 1855 and was followed by a number of updated editions. Whitman was known for adding additional material to the collection right up until his death in 1892.

Leaves of Grass is the written expression of Whitman's view of life and humanity in the form of poetry. The author masterfully connects each poem in some way, while infusing his prose with his own philosophy. This collection is unique for its time due to the emphasis the author puts on pleasures of the flesh, without resorting to symbolism to any great extent.

Delving into nature and man's role in the world, Walt Whitman left the world a beautiful and thoughtful collection of poetry that has withstood the test of time. Although Leaves of Grass was considered to be scandalous during the Victorian era, today it is seen as an important and serious work.

What listeners say about Leaves of Grass

great poetry read mechanically with a monotonous tempo. there are better readers that I should have sought out.

Whitman was way too wordy. wish he had learned the meaning of brevity.
but much of the poetry was very beautiful.