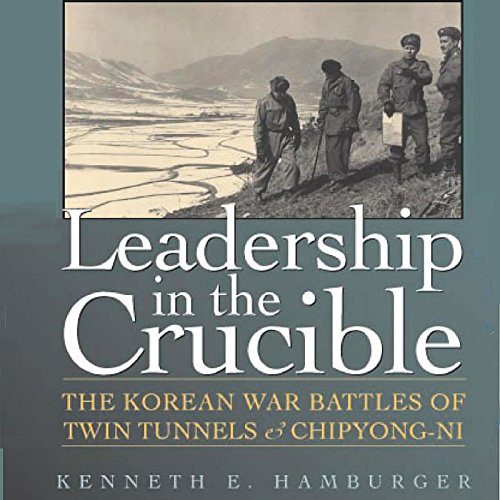 Leadership in the Crucible

At the pivotal battles of Twin Tunnels and Chipyong-ni in February 1951, UN forces met and contained large-scale attacks by Chinese forces. Colonel Paul Freeman and the larger-than-life Colonel Ralph Monclar led the American 23rd Infantry Regiment and the French Bataillon de Corée, respectively, in the fierce and dangerous battles that followed the precipitous UN retreat down the Korean Peninsula.

In Leadership in the Crucible, Kenneth Hamburger details the actions of the units in the United Nations counteroffensive following the Chinese intervention, including routine patrols, the harrowing battle of Twin Tunnels, and the pivotal siege of Chipyong-ni. From extensive personal interviews and a careful reconstruction of the written record, Hamburger brilliantly analyzes the roles that training, cohesion, morale, logistics, and leadership play in success or failure on the front lines of limited war. He also addresses the vexing problem of when, and at what level, commanders have the right and even the responsibility to question lawful orders they believe are flawed.

In this careful consideration of combat leadership at all levels, Hamburger offers his listeners stories of men sustaining themselves and one another to the limits of human endurance.

"His coverage of fighting in cold winter weather with all its problems is superb. I highly recommend this book." ( Journal of Military History)
"Masterful and thought-provoking...makes a significant contribution to the understanding of combat leadership and of the human element in warfare." ( The Journal of America's Military Past)

What listeners say about Leadership in the Crucible

A different kind of story for me, which I really enjoyed. Highly recommended. Narration as always was superb

Don’t give me wrong, I’ve known some great West Point officers. I served 34 years in special forces. I chuckled at the authors writing style, boring and worse, often non-factual and more service component hubris than history. I finished the book just to finish it, it is written in a terrible style that a teacher would instruct students that have to be there and have no other choice-just like a classroom full of West Point Cadets. Having both studied the Korean War and having been stationed in Korea more than eight years working shoulder to shoulder and sharing hardships daily with our Korean ally, the book is neither history nor reality.

I was given this free review copy audiobook at my request and have voluntarily left this review. This review is for the audio copy of Leadership in the Crucible The Korean War Battles of Twin Tunnels and Chipyong-ni by Kenneth E. Hamburger and narrated by Bill Nevitt. I’ve listened to quite a few war history books. Some of them are long and grueling and filled to the brim with details that don’t need to be told. Well, this book is not one of those. This is an excellent story about specific battle conducted by some specific units. It is a story of leadership and what worked and what didn’t work. I highly recommend it. And, of course, it was read by one of my favorite narrators. He made the story and characters come alive in my mind. Bill has the ability to make droll novels palatable and interesting novels come to life.

The Korean War Finally Gets A Bit More Air Time

This is a scholarly work that somehow manages to capture the humanity of men at war. Kenneth E. Hamburger obviously did a tremendous amount of research, gathered information and anecdotes from veterans, stayed away from interjecting opinions even when certain engagements were controversial. I appreciated the balanced view. I've come to be quite fond of Nevitt as a narrator. He seems to have a very good voice for the more scholarly works of military history, one of my favorite subjects. I must admit, however, that I don't know that much about the Korean War (It's a tragedy, but they didn't even touch upon it in high school!), so I don't know whether the pronunciations of battles and words for Korean geography are correct. Nevitt blows right through them with nary a stumble. I'm very glad to have listened to this, and it's rather made me want to listen to the more comprehensive works of the Korean War as a whole. I was given this audiobook free at my request for a fair and honest review.

This is a very mechanical, textbook like read. It’s part narration and part lessons in battle. And where one begins and one ends can be confusing. Korea was a limited war and detailed analysis of battles are very interesting. But it’s a bit wooden and hard to connect with. And then reasons for what was done and why or why not it was wrong come at awkward times. This makes it hard to truly focus on the work without getting distracted. Other than that it is very learned and studious. And Bill Nevitt’s narration is excellent. He’s a very good history narrator. He doesn’t over do it at any point. It’s overall a good listen. I was given this free review copy audiobook at my request and have voluntarily left this review.

I am not generally a reader of war books, but I found the Leadership in the Crucible to be fascinating, and I’m sure those who are interested in war, especially the Korean War, will particularly appreciate the book. This book is full of first hand reports with a focus on the leaders in the Battle of the Twin Tunnels and Chipyong-Ni. There is much to be learned from history, and there are some truly inspiring and tragic stories included here. The narrator does a very good job bringing bringing the words in the book to life. I received a complimentary copy of this audiobook. This is my honest and voluntary review.

Reads like a textbook but is very interesting, I like the frank analysis of the leadership styles.

The book overall reads like a text book and not a novel. There are a few places that are a bit dry, but overall the book is an analysis of different leaders and leadership styles as they pertain to the war. The author talks about good leaders and what made them good leaders, and he also talks about bad leaders and their shortcomings. The Author also addresses what came about from the good decisions and the bad decisions. I would recommend this book for anyone who is a leader and is trying to be the best leader they can. The blunt analysis of the generals, commanders, etc. is refreshing and something you do not hear about often. There is enough detail in the book to keep the reader engaged, and the help the reader to understand the cost of bad leadership in the military and that carries over into everyday life. I did not care for the reader though, it is a slight complaint but I think the book would do better with a deeper voice.

A close up of history

Leadership in the Crucible. A close look at 2 battles from the Korean War. A great history from the forgotten war. Well written and researched. Bill Nevitt s style of narration really suits these histories. Anyone who has an interest in history will enjoy this audiobook. I received a free copy of this audio book at my own request and voluntarily leave this review.

I admit, I don't have a vast knowledge of historical wars, so this really was a great read for me. I enjoyed the writing and the narration, and it really was amazing story. I was impressed with the detail, background and research, it was educational and entertaining. I now want to know more about history, and will definitely listen to more from both the author and narrator. Very well done. I was given this free review copy audiobook at my request and have voluntarily left this review.