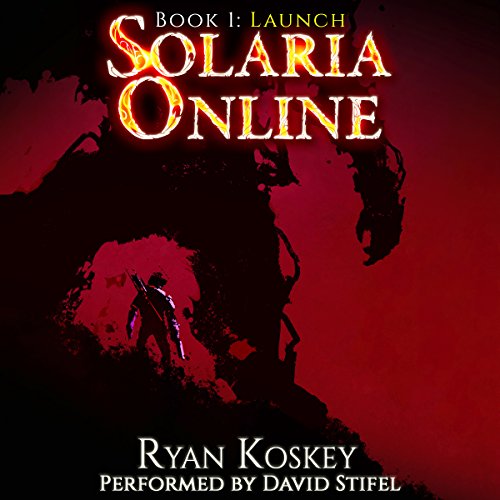 Three days before his high school graduation, Jacob Milroy learns that the military draft has been reinstated. With a war raging on the other side of the world, he realizes that he might soon be thrust into battle.

But then a groundbreaking contest within the immersive virtual reality game, Solaria Online, is announced by its visionary creator, a man who has grand plans for the human race. The prize for four lucky winners: recruitment into the Mars Colonization Initiative (and exemption from the draft).

Will Jacob be able to assemble his dream team in time to compete in the first round of the contest? With so much at stake and so many players vying for the adventure of a lifetime, he'll have to rely on his wit and ingenuity to have a fighting chance.

Launch is the first book of an exciting new LitRPG series!

What listeners say about Launch

this could turn into a great series down the road

“Launch: Solaria Online” is the first book in a new literary role-playing game (LitRPG) series written by Ryan Koskey.  The book has potential but it will need to step up its game in the rest of the series to make a name for itself in this category.  The book is not only the first in an undetermined number of books, but also the first published work by the author himself.  The audiobook is very well narrated by David Stifel who has narrated a number of acclaimed books such as the Awaken Online series.

The account follows the well-beaten and routinely taken path of other books in its genre by blending a coming of age story, family troubles, bully issues, and a grand battle to be the winner of a real-world prize.  This prize can be theirs only if their characters succeed first in the virtual game world.  In this story, the prize is two-fold, a trip to mars and the ability to get out of the upcoming military draft.  For an initial published work, the book was tolerable, but does not reach the level many have come to expect in this class of fiction.  If you are someone who enjoys literary RPG stories and can deal with a few bumps and bruises along the way, you may find the book enjoyable.  It is difficult to recommend it when so many other books are available to scratch this itch.

Solaria literally launches to great excitement and quickly becomes the game many of the younger crowd play when not doing their homework or other out of game activities.  Players use a VR (virtual reality) headset to enter a game consisting of multiple fantasy locations.  The book includes some near-futuristic technology such as automated lighting and computer tablets used for accomplishing homework.  I liked Mark the personal assistant of our main character which today would be similar to Alexa, Siri, etc. but slightly advanced.  In many ways, the book reminded me more of a modern take on the “Ferris Bueller's Day Off” story if they were tossed into a virtual fantasy world.

Jacob has many of the same issues a boy growing up in a broken home may experience during high school.  Both his parents work menial jobs not earning enough money to live in their own house, so they depend on grandparents for housing.  Adults are often out and about or meddling with the kids’ lives so the main character tries to escape this physical world by becoming something in this newly created virtual world. The book is mostly centered around a good versus evil story.

For me, the book was written at a level targeting younger readers, but due to the crude and vulgar language, I’m unsure it was the intended audience.  In this very established genre, I felt the writing was mediocre.  It often lacked depth, character development, or intrigue.  I felt the story meandered while at the same time being too rigidly sticking to usual outcomes.  It did not contain many surprises nor did the action sequences feel heavy or weighty as I would have expected based on the game’s stakes; even in a virtual world.  There were many coincidences that seemed to all come together too well making the story overall unbelievable.

There were a few subtle grammatical issues I came across in the book, but fewer then I would have expected for one’s first published work. The story was rather predictable to someone familiar with the genre and I felt the actions of the main character, being a paladin, did not align correctly with his in-game actions.  Even in times of intense fighting, I felt the battles were often too linear and felt staged.

As stated earlier, I also did not feel the prize of mars was expounded upon.  I would have liked to have has some details or insight on any background events occurring to prepare for this grand space journey; maybe a few flashbacks or flash forwards.  I would have also liked to have had more background on the company creating the game and their overall intentions or agenda in creating it.  It seemed we had a mysterious corporation but limited details on who or what it was, this is where some of the intrigue may have come in.  Maybe all of this is already planned for future books, however I wanted more and thought the author could have added pieces of it in this book making it feel grand or majestic.  I personally did not get this feeling while listening to the story.

Let me say up front that I’m a fan of David Stifel’s narrations and his work on this book was what I would expect for his quality.  The characters are well voices and distinct.  The audio quality was professional and lacked any observed audio artifacts such as page turns, swallows, etc.  The audio was clean, crisp, and consistent.   I felt he worked with the material he was given and did the best job he could.  I found that the book itself was always attempting to keep the reader or listener on the edge of his seat, and because of this, it seemed the narration was read as if tension or action were always occurring.  Again, I think this more is due to the story itself and not due to the narration.

A warning to parents and younger readers, this story contains vulgar language which occurs more frequently as the book progresses.  The book contains crude humor and interactions between friendly and foe characters.  Some of the communication includes innuendos or references to sexual body parts.  I often find this type of language and or humor takes away from a fantasy story.  If the author intended this to be for younger audiences, I cannot recommend it based on the above.  If you are at all offended by the use of such language or humor, I would direct you to a different book.

In summary, the book has potential and I hope the author continues to refine both his writing and the series going forward.  It is a hard series to recommend at this stage based on the issues outlined in the review above, but I think with a little extra work and some editing, this could turn into a great series down the road.

Nobody. There were no redeeming qualities

What could Ryan Koskey have done to make this a more enjoyable book for you?

Completely rewritten it. I enjoy the LITRPG genre and I've come to expect that the stories won't be always be great but this book was insultingly bad. I can't decide what was worse...the completely ridiculous and unlikeable characters or the godawful dialogue that they spew.

Would you be willing to try another one of David Stifel’s performances?

No. I've listened to him before and while he does have a good voice he is incapable of narrating a story. He managed to make an already terrible book worse.

If you could play editor, what scene or scenes would you have cut from Launch?

Everything. There was nothing about this book or its narration that is salvageable.

I realize my feedback is harsh but I assure you that I'm not being mean for the sake of it. This book literally made me angry at how bad it was.

Do you hate america?

...then this is the book for you! If you are looking for preachy clean earth capitalism is bad fiction, then pick this one up. if not, pass